Alumni Event of the 1989 graduates of FIOT 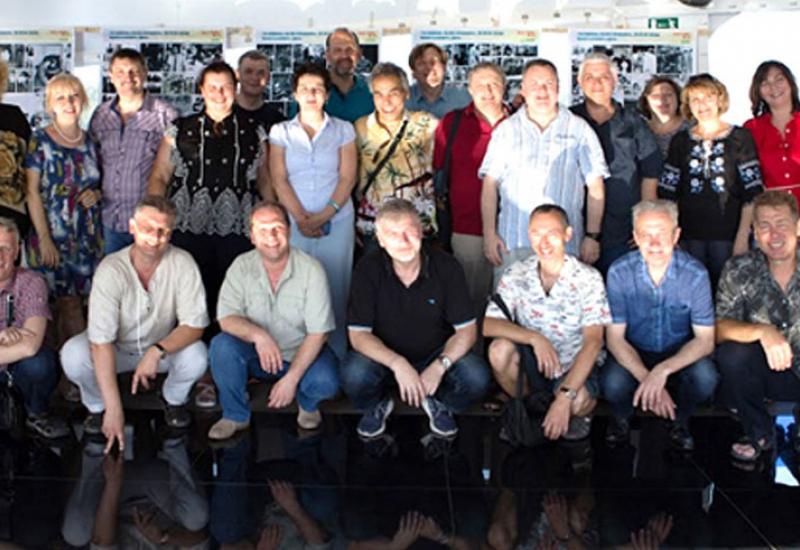 The event was held on the Sribna Hvylya motor ship.Its program was full of warm memories and photo, video, disco of 80's and a five-hour walk along the Dnipro.The organizers of the meeting, former students of the group IV-33 -Yuriy Sydorenko, Oleksandr Vasylenko, Edyard Avramenko, Oleg Gudyma and others-posted on the upper deck of the ship posters dedicated to the years of study: "Student Life", "Collective Farm Life", "Military Life", "Recreation and Entertainment", "Our Lecturers" and banners telling about the event. Each newcomer was greeted by photographers taking snapshots.The newly photos with autographs were placed on the photo album stands. So it was possible to compare yourself then and now.

Everyone was in a great mood. It was interesting to again meet each other and to communicate.All present returned to a large family of like-minded people, where they love, respect and appreciate you only for being "your", "our", for a great and rich past at the Igor Sikorsky Kyiv Polytechnic Institute - for the whole six unforgettable years together!

There was also sincere communication, full of memories and subsequent dreams, and during the banquet.Around the ship opened breathtaking views of the banks of the Dnipro, our Ukrainian nature.These wonderful landscapes added good mood, inspiration and infinite happiness!

Then they watched music videos: "Walking along the Igor Sikorsky Kyiv Polytechnic Institute 2019", "Memories of lecturers", "Memories of those who are no longer with us".

They recalled the difficulty of entrance the faculty. Warmly recalled the Head  (and organizer) of Computer Engineering Department, corresponding member of the Academy of Sciences of the USSR and The National Academy of Sciences of Ukraine,laureate of the State Prizes of the USSR and USSR, Doctor of Engineering, Professor K. G. Samofalov and the lecturers.

Despite the fact that many changes have taken place in our country over the past 30 years, the graduates of 1989 have been strong,succeeded, and kept sincerity and warmth in their hearts. Executives from private firms, scientists, and experts in various areas of our modern life were among all the people.People who are able to implement their experience and knowledge in the profession, with a high culture and great love for life. It is important to mention that some of these graduates currently live and work in the United States, Italy, Germany and other countries. Through their work at leading foreign companies, they have shown a high level of education in the Igor Sikorsky Kyiv Polytechnic Institute.However they always remember of their roots and Ukraine.

Students from Tunisia, Jordan, Cuba, North Korea, Bulgaria had been studying with us.Thanks to modern technologies, despite the distance, they are still in touch, and some were at our meeting. The alumni meeting caused a wave of social networking. Those who were unable to attend the meeting in person due to certain circumstances were involved in the communication. So this event brought everyone together even more.

The meeting was very dramatic, everyone was proud of the fact that they were from the Igor Sikorsky Kyiv Polytechnic Institute and thanked the university, which gave the main guidelines for further life and becoming.