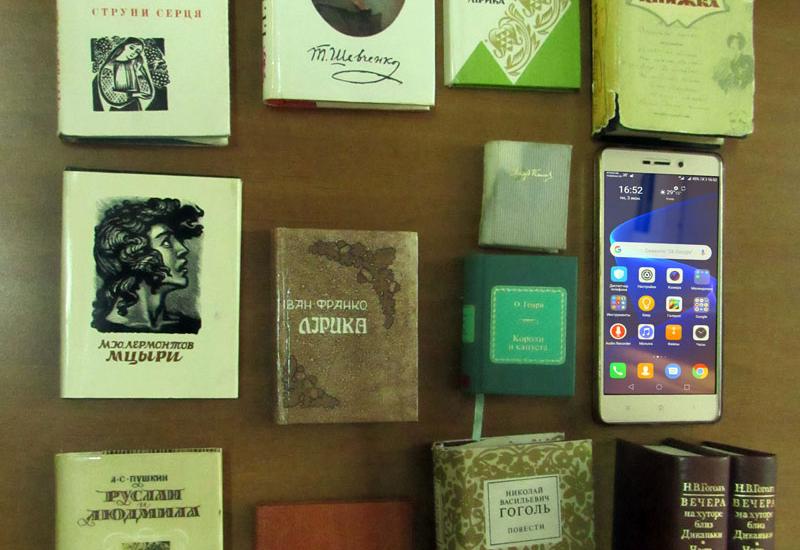 Among numerous different unique publications that are stored in the division of rare and valuable documents of the Scientific and Technical Library of Igor Sikorsky Kyiv Polytechnic Institute there is a collection of small format books. The collection of such miniatures includes nearly 400 copies. It was replenished during the second half of the twentieth century. It was a time when the library received an obligatory copy from various   publishing houses throughout the whole USSR. Such a collection is not typical for a specialized library of a technical educational institution. But, from book expert point of view, it only increases the significance of the university.

Traditionally, miniatures are considered to be no more than 10x10 cm. This is a special type of publication with an ancient and interesting history. The first miniature books were handwritten. Then, they become popular among the aristocracy and educated people. In XVII-XVIII centuries lots of them were in different European countries such as Germany, France, England, etc.

The theme of miniature publications, both handwritten and, over time, printed, was formed in the Middle Ages. These were religious (miniature Bibles, prayer books), poetic (almanacs or books of poetry of individual authors), and just practical publications (dictionaries, calendars, agriculture handbooks, practical teaching aids). So it was such literature that should be daily at hand and which was easy to take with on trips.

It is known that during the military campaigns Napoleon Bonaparte carried the portable travelling library with him. It consisted of 49 books that were in a special leather case, which in a folded state looked like one volume. Empress Yevheniya, the wife of the French emperor Napoleon IIIІ, collected 2 thousand miniature publications in the middle of the XIX century. About the same amount was collected by the American president Franklin Roosevelt.

If we talk about the price of such literature, then it was quite high. Firstly, the circulation was not large. Secondly, such books had expensive and valuable binding and finishing, for example, high-quality leather, silver and gold, and other precious materials. In fact, miniature publications became a kind of valuable examples of publishing and bookbinding.

But in the middle of the XIX century the general trend changed. In the early 1860s Georgiy Mykolayovych Skamoni (1835-1907), the inventor in the field of printing, developed a photomechanical method for reproducing miniature publications, which quickly became widely used. So, miniature books became cheaper and accessible to various segments of the population. For example, during 1891-1895 in Kyiv, the «South-Russian Book Publishing House of F. Johannesson» made a series of miniature publications under the general name Kroshka (more than 2 million copies), and they were printed at the printing house of Serhiy Kulzhenko. The series had a great success, and some books were repeatedly reprinted.

At the beginning of the twentieth century in Leipzig, Gunter Schmidt publishing company became the largest publishing house to produce the miniature series such as Lilliput Dictionaries and Lilliput Classics. Today many books from this series are stored in collections of collectors.

Another German publishing house of Bange (also in Leipzig) published A Small Library for Schoolchildren and Students that was a series of thin brochures with abstracts of training courses in arithmetic, botany, zoology, history, chemistry, physics etc. Subsequently, miniature guidebooks to cities and countries appeared. In the 30s of XX century in the form of miniatures, literature for cognitive leisure was published. There were collections of crosswords and rebuses, coloring books, descriptions of various games, and, of course, children's literature. But the real prosperity of miniature publications began in the second half of the twentieth century, and it does not disappear even today. The theme is very wide, from the masterpieces of classical world literature to cookery, from history to mathematics. And, although some enthusiasts are struggling to produce the smallest publications, we must remember that the main thing is the word and books content of any format.

Our library collection of miniature books includes interesting examples of binding art and illustrative art, in the creation of which both ancient and modern technical achievements were used.

Chronologically, the collection includes publications from 1963 to 2012. Mostly, these are works of fiction (world and Ukrainian) in Russian translations. There are lots of poetry collections and lyrical and romantic prose. There are many publications devoted, for example, to the history of lamps or samovars, to the history of porcelain in the early twentieth century and the art of enamel painting. There are some architectural historical essays and guidebooks to the cities of the former Soviet Union. The books have a large amount of information material and photos.

Most of the collection consists of literature on the miniature publications and art of the book. These are bibliographic indexes and catalogs of the exhibitions of the 70s and 80s of XX century. Among them is Praise for a book (thoughts and statements of outstanding people about the book, drawings, photos, bookplates, book stamps, fragments of manuscripts, etc.), Miniature books (pages of history, formats, production of miniature publications, history of collecting such publications, bibliography), Disputing with volumes in two parts published by Pochtovyk (1905-1994) who is a famous book expert, Russian Initial: The Second Half of the Nineteenth Century, the Twentieth Century (album), republication of Book Art by Sydorov in 1921 etc.

There are several facsimile publications in the collection.  One of them is the Small Book of Taras Shevchenko with autographs of poems that were written from 1847 to 1850. The book was published on the 150th anniversary the Kobzar's birth in 1963. The original book is kept at the Institute of Literature of the National Academy of Sciences of Ukraine. The format of the publication is 60×90 mm, its circulation is 30 thousand, and the foreword was written by Yevheniy Shabliovskyy who is the Doctor of Philological Sciences. This, by the way, was the first example of a facsimile mini-publication in the Soviet Union. The libretto of the opera Zaporozhian (Cossack) Beyond the Danube (Cossacks in Exile) by Gulak-Artemovsky is another example of Ukrainian publication.

The guidebooks are introduced in several copies, and among them is a photo essay by Derevyanko, dedicated to the Odessa National Academic Opera and Ballet Theatre. This guidebook was presented by the publishing house Mayak in 1984. Another guide is The monument to T. Shevchenko in Kharkiv of the publishing house Flag, 1984

Ukrainian literature is represented by the works of T. Shevchenko, I. Franko, Lesia Ukrainka and others.

Among modern domestic publishers, miniature publications are produced by Folio in Kharkiv and by Kyi in Kyiv.

Most of the collections have an original design made by famous artists. It is also worth saying that the difference in the printing and illustrative design of large and small publications increases the value of the unique collection stored in our library.