The first issue of Ukrainian specialists in conflict resolution and mediation 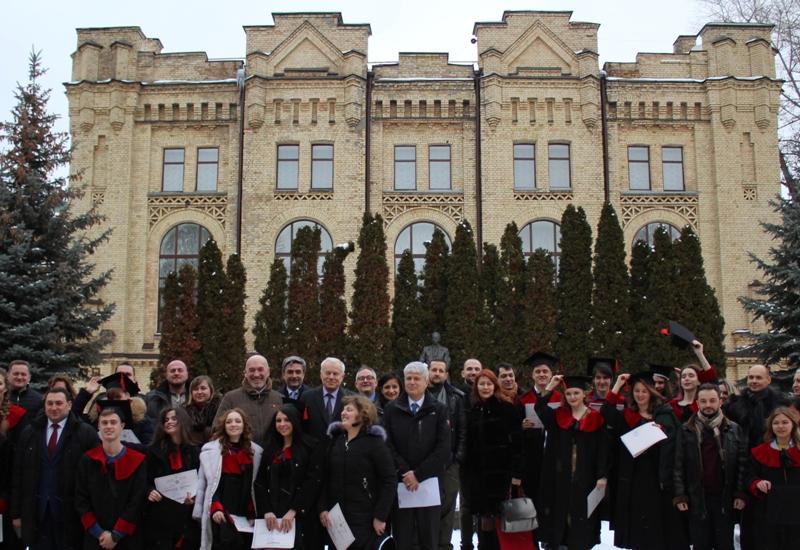 On 15 January was a solemn ceremony of awarding the Masters diplomas to the first graduates who studied at the Faculty of Sociology and Law in the specialization "Conflict Management and Mediation" in the hall of the Administrative Council of the Igor Sikorsky Kyiv Polytechnic Institute.

The first Ukrainian master’s degrees in this specialization received fifteen graduates who were enrolled in the hospital and eight of them who received the extra-mural knowledge. In addition, the diplomas were awarded to six masters who studied in the specialization "Sociology of Modernization and Scientific and Technical Development", but a considerable number of disciplines were mastered together with future specialists in conflict resolution. The Master's diplomas were presented by the Deputy Minister for Temporarily Occupied Territories and Internally Displaced Persons of Ukraine Georgy Tuka and the First Vice-Rector of the Igor Sikorsky Kyiv Polytechnic Institute academician of the National Academy of Sciences of Ukraine Yuriy Yakimenko.

The Master's program in Conflict Resolution and Mediation was opened at the University in 2017. It has been developed by teachers and scholars of the Faculty of Sociology and Law in collaboration with the Ministry of Temporary Occupied Territories and Internally Displaced Persons of Ukraine and partners from the United Kingdom and the Swiss Confederation. The program is aimed at training specialists in non-power conflict resolution, so that the first students studying in this specialization learned a series of disciplines related to problems of sociology, management theory, law, psychology, etc. Among them is the Sociology of Conflict; "Modeling and forecasting of social conflicts"; “Negotiation Theory and Practice”; "Political instruments of social reconciliation"; "Theory and methodology of contemporary conflictology"; "Psychology of Conflict and Mediation Practices"; Fundamentals of Restorative Justice and others. A number of courses were taught in English.

“Starting in 2017 the educational program on conflict resolution and mediation, we had and hope that Ukraine will soon have peace in the near future. At the same time, we see that there are serious confrontations in the east of the country that need to be resolved as soon as possible. Therefore, the need for specialists receiving diplomas today has only been actualized, since considerable efforts are needed to achieve real results. - Yuriy Yakimenko, the first Vice-Rector of the Igor Sikorsky Kyiv Polytechnic Institute, emphasized in welcoming the graduates. "For the first time in Ukraine, a comprehensive program of training of experts in social conflict resolution has been created, based on the latest research in various fields."

Yuriy Yakimenko also noted that the need for such specialists is not only in Ukraine. Specialists in conflict prevention and peacebuilding are trained by a number of leading universities in the world - Westminster University, St Andrew's University and Durham University (all in the UK), Johns Hopkins University (USA) and others.

“You are the first mediation experts in Ukraine who received the Masters degrees and diplomas. From my point of view, it's a breakthrough. Why? If we go out with you right now and ask passers-by, then I'm sure that ninety-nine percent will be confused about mediation and meditation. And these are the specialists who are professionally immersed in the process and understand the principles of conflict resolution. For each of us, the processes of conflict avoidance and settlement are a matter of our daily lives - starting with family, team, and interstate relations, - said the Deputy Minister for Temporary and Occupational Temporary Affairs Georgy Tuka with congratulation graduates.

In fact, there are no industries or areas of human activity for which the doors would be closed to you ... Perhaps I am wrong now, but from my point of view, if we had enough such specialists in our time, then it is possible that in the east our state would not reach the conflict that we have. "

The graduates were also greeted by the Ambassador Extraordinary and Plenipotentiary of the Swiss Confederation to Ukraine Guillaume Schoerer; Advisor, Program Manager at the Embassy of the United Kingdom in Ukraine, Hema Kotecha; Director of the British Council in Ukraine Simon Williams, Advisers to the Minister for Temporarily Occupied Territories and Internally Displaced Persons of Ukraine Sean Lochna and Norbert Ruchne and others.

Anatoly Melnychenko, the Dean of the Faculty of Sociology and Law, said that an important feature of the training of future specialists in conflict resolution and mediation was to immerse them in the real issues and activities of the relevant bodies, as well as to cooperate with the best European experts who have also read lectures for them.