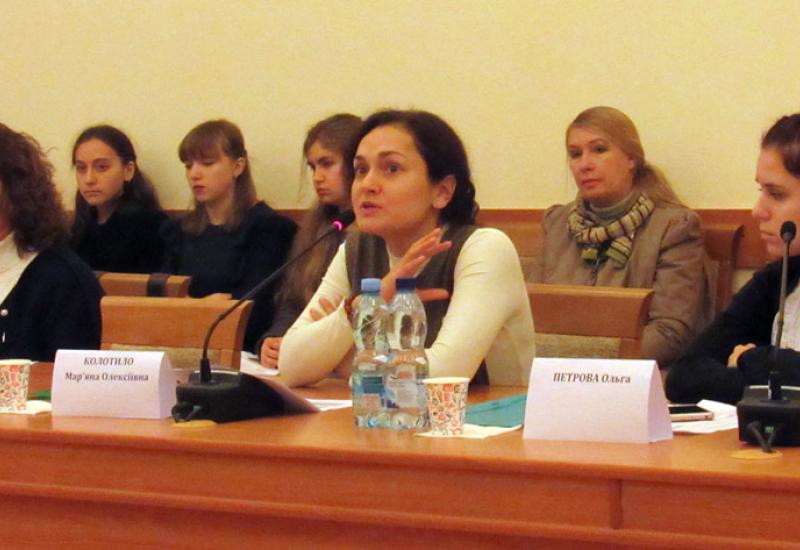 On October 25, the International Scientific and Practical Conference “World Conflicts in the 21st Century: Philosophical Reflection of Social, Economic, Ecological, Political and Religious Aspects” was held in the walls of Igor Sikorsky Kyiv Polytechnic Institute.

The plenary session was opened by the dean of the FSP A.A.Melnichenko His introductory speech contained not only the traditional greetings and wishes of fruitful work and constructive dialogue, but also outlined a complex of complex issues containing the multidimensional problem of world conflicts in the 21st century. Anatoliy Anatoliyovych drew attention to the role of the philosophical reflection in understanding the origins of this phenomenon and noted the special demand of the knowledge that the person now has to possess – “... not a distorted idea of ​​the nature and regularities of the development of social relations within a specific socio-economic formation”. The dean also emphasized that in Igor Sikorsky Kyiv Polytechnic Institute, for the first time in our country in 2017, the training of conflict management and mediation specialists was launched that can help separate social groups, participants in the conflict.

The speech of the head of the department of philosophy B.V.Novikov was devoted to the phenomenon of war in optics of the XXI century. Drawing on the logic of the historical process of the ancient world, and relatively recent events, scientific facts and statistics, the philosopher revealed that reality, close to the face to which humanity exists today: “or – or”. Only ignorance helps its carriers not to be afraid. But at what price? On the balance of irresponsibility is life in all its forms and manifestations.

Despite the multidimensional issues of world conflict and the penetrating sound of this theme for all of us, all the performances were not alarmistic, but contained a deep research approach, historical and philosophical arguments, reflecting the directions of modern scientific research. The speeches of the participants of the plenary session concerned a number of actual measures of philosophical comprehension of the phenomena of the war and peace: cognitive (Prof. O.M.Rubanets), ontological (S.V.Alushkin), technological (associate professor I.A.Muratova), anthropologists (Candidate of Philosophy, M.A. Kolotylo), religious scholars (Ph.D., S.S. Stavroyani). Phylosophical vision of the concept of “world peace” in their speeches presented by associate professor. V.G. Semenov and N.V. Denisenko. The conception of the problem of modern forms of slavery, which continues to be one of the most conflict-causing factors in society, was reflected in the report of the student of FSP Olga Petrova.

At the end of the plenary part of the conference, Igor Sikorsky Kyiv Polytechnic Institute's professional work of representatives of the technical training department was established by skype-connection with participants from other cities. The issue of dialogue continued one of the strategic lines in the issue of conflict resolution and resolution –  the sphere of social work. Students of FSP, future social workers – heard and discussed with their colleagues from the Kryvyi Rih Pedagogical University reports on such topical topics as domestic violence in Ukraine and ways of overcoming it, rehabilitating servicemen at the end of military operations, the role of social work in solving the problems of temporary immigrants and others. An exchange of views was held, which, according to the participants of the media platform, was important and useful, and had both theoretical and applied orientation of further interaction.

The final stage of the conference was section work: reports, the main ideas of which were formulated in the abstracts, included in the collection of conference materials. After the speeches there was an active discussion of the reports.

At the end of the conference, all the participants came to a joint conclusion: the answers received during the collective reflection process actualize new, not less important issues that require separate reflection within the framework of the following measures. The public request for public meetings on the most pressing and actual problems of the present is great, and therefore, scientific discussions will continue!