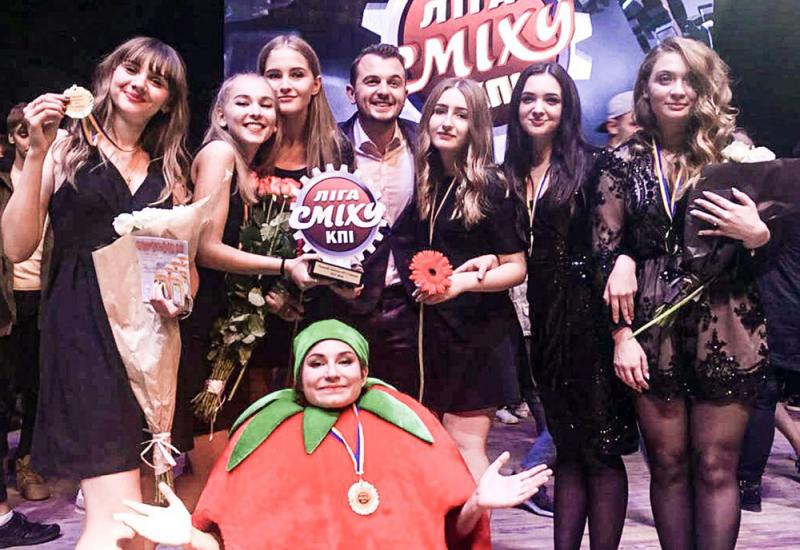 "League of laughter" of Igor Sikorsky Kyiv Polytechnic Institute is the first official students' "League of laughter". The season started last year, namely, on October,3, when teams who aimed to try themselves in new project gathered. Later, on November,7, on gala concert six star coaches, Igor Sikorsky Kyiv Polytechnic Institute graduates, chose 12 teams. Among coaches and their teams in final there are: Anna Hres and "Еnergetics" , Vitaliy Karan (who changed Oleksander Hayenko) and "Serpen' " , Yevhen Yanovych with teams "2×2" and "Women team from Faculty of Linguistics", Sergiy Bryl and "10 different ones".

Teams took part in two competitions: canvas and theatrical competition with star coach's friend. "Energetics" and Anna Hres in role of Harley Queen were the first. Her bright transformation brought the team 4 points. The next were "2×2" , who decided to confuse Yevhen Yanovych and wear costumes of linguistics' team. But the coach's love was big enough to treat both teams, and "2×2" made sure it's true- 5 points for a performance! Sergiy Bryl decided to help "10 different ones" to win and called for somebody more experienced- " Polytechnic Matadors" were on stage again and brought the team 4 points from other coaches.

"Serpen' " team misses Oleksander Hayenko, however agrees to cooperate with new coach- Vitaliy Karan. His transformation into Kolomoyskiy brought 4 points to the team. Spectacular performance of "Women team of Faculty of Linguistics" in suits of vegetables-winners confused Yevhen Yanovych, as well as champagne which makes dreams come true. But one of girls' dreams came true- they took 5 points for canvas!

Next, there was theatrical competition, where Illya Lyysenko ("Krypa" team) and "10 different ones" with new show version of "Orel&Reshka", Oleg Maslyuk (actor of "Mamahohotala" studio ) and  "Women team of Faculty of Linguistics" in updated fairy tale about Snow White and the Seven Dwarfs, Vlad Kyran ( " Veterans of space forces") and "2×2", "Energetics"  and Oleksander Stankevych (  "Odessa stories" teams), "Serpen' " and Abraham Ohanesyan ( "Nikol Kidman" team) in the role of taxi driver.

Due to the result of two competitions  both of Yevhen Yanovych teams took the same amount of points, that's why due to the rules they have battle. The tension was rising in the hall and on stage , as coaches doubted ,whom to give their voice.Voices of four coaches shared equally, that's why the crucial voice belonged to Anna Hres. Women solidarity works - girls became winners of the first season of  "League of laughter" of Igor Sikorsky Kyiv Polytechnic Institute!

Natasha Omelchenko, "Women team of Faculty of Linguistics" captain: "It is impossible to explain the emotions during the performance. When the whole hall applaud, when you feel the spectators' support- you realise that big amount of work on plot was worth it. We are very grateful to our coach, who believed in us and did everything for us to win!"

Exactly the winners will be able to represent our university on "League of laughter 2019" Odessa festival, so congratulations to girls and best wishes to their future performance!