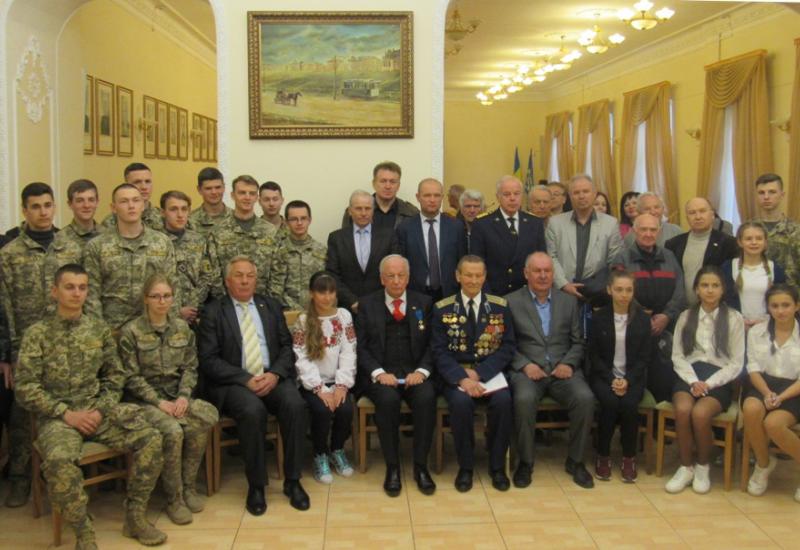 On April 12, humanity celebrates the World Aviation and Space Day and the International Day of Human Space Flight. In our country it also falls on the Day of Workers of the Rocket and Space Industry of Ukraine. Taking into account that many employees, graduates and students of the Igor Sikorsky KPI are directly involved with this branch – some throughout the working life, and someone through participation in relevant projects – today, the university always has interesting events and actions. It was no exception and the current year.

Participants of the meeting of the Round Table were vice-rector for the scientific work of Igor Sikorsky KPI, Academician of NAS of Ukraine Myhailo Ilchenko, Advisor to the Chairman of the State Space Agency of Ukraine Eduard Kuznetsov, Head of the Department of Aerospace Systems of the National Aviation University, Veteran of the Space Industry of Ukraine Valeriy Azarskov, Vice-Rector for Scientific Work of the State Ecological Academy of Postgraduate Education and Management, Honored Worker of the Space Industry Ukraine, Professor Oleg Mashkov, military pilot, graduate of the Yu.O. Gagarin, Academy of Air Force retired colonel Mykola Sergeev, veteran of the Kapustin Yar spaceport, Honored Space Testing Technician Oleg Pruss, chairman of the Interregional Union of Veterans of the Strategic Missile Forces of Ukraine, General Mykola Filatov, Head of the Department of Aviation and Astronautics of Igor Sikorsky State Polytechnic Museum, veteran of the Baikonur Cosmodrome Olexandr Boltenko, veterans of the cosmodrome Baikonur, Kapustin Yar, Plesetsk and others. And, of course, the teachers and students of the KPI, students of the Lyceum of KPI, students of secondary school No.36 named after Korolyov.

The meeting began with a speech by Valery Azarskov “Yuri Gagarin –  the first astronaut of the planet Earth”. He told about who and how he took the pilots to the squadron of astronauts, their training, about the circumstances of launching the first astronaut into orbit. For the younger part of the audience, much of what they heard was news, and for veterans of the space industry – a reminder of the first human steps in space and their youth.

Oleg Mashkov told about how humanity perceived the news of the beginning of the conquest of the universe, as Yuriy Gagarin honored, about his life after the flight and the work of the head of the astronaut squad. He also touched on the official version of the death of the first astronaut of the Earth, built on the conclusions of the government commission to investigate the circumstances of the crash of the MiG-15UTI aircraft, which resulted in the death of the Heroes of the Soviet Union on March 27, 1968, pilot astronaut Yuri Gagarin and test pilot Volodymyr Seryogin.

Mykola Sergeev substantially completed the second part of his story ; he reminded of the other most common versions of the death of Yu.O.Gagarin and V.S. Seryogin (many of them are still circulating, including quite exotic ones, for example, that the first astronaut died during the flight on the spacecraft of the Moon two weeks before the officially declared date of his death, or even that Gagarin was not dead, but was kidnapped by aliens) and posted his. Note that communication with Mykola Sergeyev happened via Skype, since he currently lives in the United States. So he recalled that 29 volumes, where the materials of the government commission's work, which studied the causes of the fall of the initial training fighter MiG-15, have not yet been made public. Moreover, many aviation experts considered and believe that the commission deliberately concealed the truth. So Colonel Sergeyev reported on his findings, which he, as a pilot with enormous experience, came after communicating with many witnesses of the tragedy, comrades and subordinates of Seryogin and Gagarin, and studying the relevant materials. In short, it reduces itself to numerous violations during the preparation of this flight: the aircraft was equipped to perform completely different tasks, pilots did not have weather data in the square where they had to perform the training task (say, the height of clouds was much lower than on the eve, which, in the end, played a key role), and so on. Because the weather was very poor, the crew requested permission to return 5 minutes after the flight began. The steep turnout was conducted in a dense cloud, the pilots did not see the earth's surface, the plane, most likely, fell into a steep spiral, and when it came out of the clouds, it was too late – it just did not have enough height to get out of the peak ...

Oleg Pruss didn’t agree with all the conclusions of Mykola Sergeyev ; he collected materials and evidence of the death of Yuri Gagarin and Volodymyr Seryogin for many years. He pointed out some things that cannot be logically explained if we proceed from existing hypotheses. Thus, humanity does not yet know the full truth about the causes and the real circumstances of the disaster.

Mykola Filatov and Eduard Kuznetsov also spoke at the meeting. They congratulated its participants on the Day of Aviation and Astronautics and on the Day of Workers of the Ukrainian Rocket and Space Industry. In addition, Eduard Kuznetzov informed about the initiative taken by the State Space Agency of Ukraine (SSAU) and a number of other organizations on renaming the Moskovska street (on which the SSAU  is located) in in honor of the first cosmonaut of independent Ukraine, Leonid Kadenyuk.

Finally, the participants of the Round Table made a joint photo on memory.