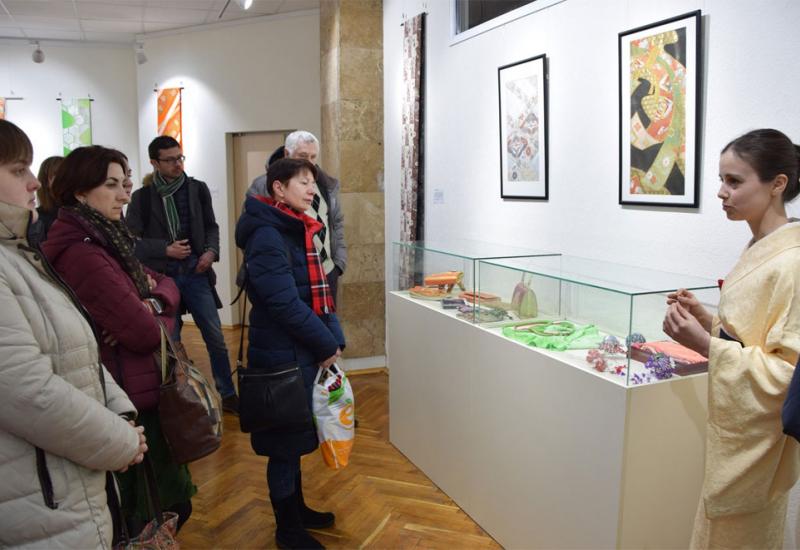 An exhibition of traditional Japanese clothing – kimono was held at the Ukrainian-Japanese Center of the Igor Sikorsky KPI. Visitors were fascinated by aesthetics and minimalism, which are the essence of the Rising Sun Country.

Patterns applied to the fabric by various techniques are filled with deep symbolism, and every smallest detail, such as the length of the sleeve, the color of the dress, or the variation of the oblique belt binding, is important, which is understandable only for the Japanese in the language of transmitting information about age, status, the social origin of a person . At the exhibition were presented not only kimonos of different types, but also accessories to them.

Archaeological findingss on the Japanese archipelago confirm that the ancient Japanese wore simple hemp clothing. At the beginning of the 1st millennium BC under the influence of the continental fashion, cotton and silk suits of the Korean-Manchu type came to Japan. In VI-VIII centuries, islanders were influenced by Chinese culture, which affected clothing, which was an exact replica of Chinese counterparts. In the days of Heian (794-1185), the Japanese first departed from the continental canon, creating a prototype of modern kimono. From the 13th to the 15th centuries, the main types of unique Japanese clothes for different social strata were formed. The evolution of the Japanese costume of the Edo period (1603-1867) affected the simplification of the design and the enrichment of the decor, which led to the emergence of modern kimono.

The revolution in Japanese clothes was caused by the Westernization of the Meiji era of the second half of the nineteenth century. The European fashion began to oust Japanese traditional costume. This process was gradual and superficial until 1945, affecting only the leading layers of society. However, democratization and “Americanization” of the lifestyle of ordinary Japanese led to the displacement of Japanese kimono from everyday life. Today, the Japanese traditional costume is used mainly only during holidays and official events.

The fabrics from which kimono are made are usually inelastic. Cloth is used for the belt. Patterns for clothes are usually rectangular and different from European analogues with complex rounded shapes. Due to this, economies of scale and practically complete utilization of the fabric are achieved.

Unlike traditional European clothing, which emphasizes the shape of the human body, the kimono allocates only shoulders and interception, concealing the disadvantages of the figure. Western clothing emphasizes relief, and Japanese - on a uniformity and plane. This is due to the traditional ideas of the Japanese about the ideal constitution – “the less the bulges and inequalities, the more beautiful”.

The belt obi performs not only a practical function – fixing kimono, but also decorative. It gives the dress of completeness and massiveness. To do this, make a special section of brocade or dense silk with a rich pattern in the front, where the belt tightly adjoins to the figure, and at the rear, where it is tied by a bow. The belt can have a length of three meters or more. There are many ways to tighten the belt. Previously, the form of the site indicated the status of the Japanese woman, and now depends only on its taste and ability.