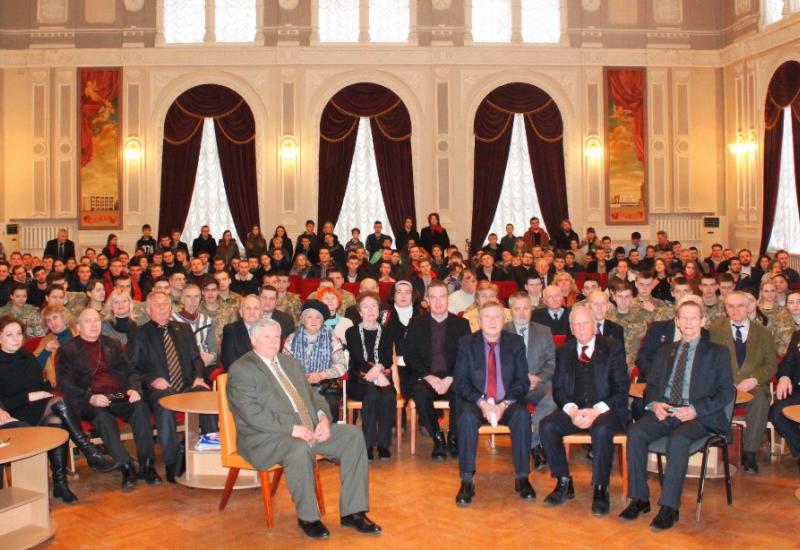 The Memorial Day of the first cosmonaut of independent Ukraine, Hero of Ukraine, Major-General of Aviation, People's Deputy of Ukraine of the 4th convocation Leonid Kadeniuk was celebrated on March 13 at Igor Sikorsky Kyiv Polytechnic Institute.

Leonid Kadeniuk suddenly passed away during his morning jogging on January 31 of the current year. At Igor Sikorsky Kyiv Polytechnic Institute he was not only deeply honored as the first cosmonaut of independent Ukraine, but was equally regarded as a colleague and friend: he was a Deputy Chairman of the University's Supervisory Board, Honorary Doctor of the Faculty of Aviation and Space Systems and adviser of the rector, he repeatedly participated in Scientific Readings at the State Polytechnic Museum. Absolutely devoid of any pride or arrogance, he sincerely communicated with the students on the events at the University held by Kyiv Small Academy of Science and the Ukrainian Youth Aerospace Association "Suzirya", he collaborated with researchers and students of faculties and institutes. Moreover, he never refused to make a photo with the participants of various events, perceiving it as a tribute to the huge popularity. So the Memory Day at the KPI turned out to be particularly warm and informal.

Participation in the memorial event was taken by the wife of the cosmonaut Vira Kadeniuk and his son Dmytro, the rector of the university, the academician of NAS of Ukraine Mykhailo Zhurovsky, the head of the State Space Agency of Ukraine Pavlo Dehtiarenko, the adviser of the head of the State Space Agency of Ukraine Eduard Kuznietsov, the director of the Main Astronomical Observatory of the National Academy of Sciences of Ukraine Yaroslav Yatskiv, the head of the Ukrainian Youth Aerospace Union "Suzirya" and a friend of Leonid Kadeniuk Oleh Petrov, an understudy of Leonid Kostiantynovych Nadiya Adamchuk-Chala, Director of the Cosmic Space Museum named after S.P. Koroliov (Zhytomyr) Iryna Diachuk, veterans of the cosmodrome Baikonur, Kapustyn Yar, Plesetsk, students and teachers of the University, members of the Small Academy of Sciences, students of the Technical Lyceum NTUU "KPI" and the secondary school №36 and others.

After watching a film about a space flight in which Leonid Kadeniuk participated as the international crew member prepared by the State Space Agency of Ukraine, the participants of the Memory Day talked about the way they remembered the first cosmonaut of independent Ukraine, how persistently he intended to realize his dream about the Space, how difficult he worked during the tests of the new aviation engineering and space systems (Leonid Kadeniuk was a cosmonaut-tester of the multiple space system "Buran" and passed engineering and flight training as the commander of the ship, he made the space flight in 1997 on the US multi-purpose transport spacecraft Columbia as a researcher), about the meaning and significance of the biological experiments that he conducted in orbit. By the way, talking about many little-known facts, several speakers also mentioned that Leonid Kadeniuk was taking "Kobzar" by Taras Shevchenko in his flight. It was the first (!) printed book in orbit - until that time there were only electronic copies of literary works in the space. In 2014, during the celebration of the 200th anniversary of Taras Shevchenko, Leonid Konstiantiyovych presented this unique volume to Taras Shevchenko Kaniv Museum.

"We know that Leonid Kostiantynovych loved life, loved his family, loved his friends, loved young people. So he will live in our memory, said the rector of the University Mykhailo Zhurovsky at the end of Leonid Kadeniuk Memorial Day. “So he will stay with us. And he will continue to educate new generations of Ukrainian engineers, designers and, I hope, new Ukrainian astronauts by the examples of his live ... ".

In the photo: participants of Leonid Kadeniuk Memorial Day in the Hall of Meetings of the Academic Council of Igor Sikorsky Kyiv Polytechnic Institute.