Not only state budget has to improve the level of science 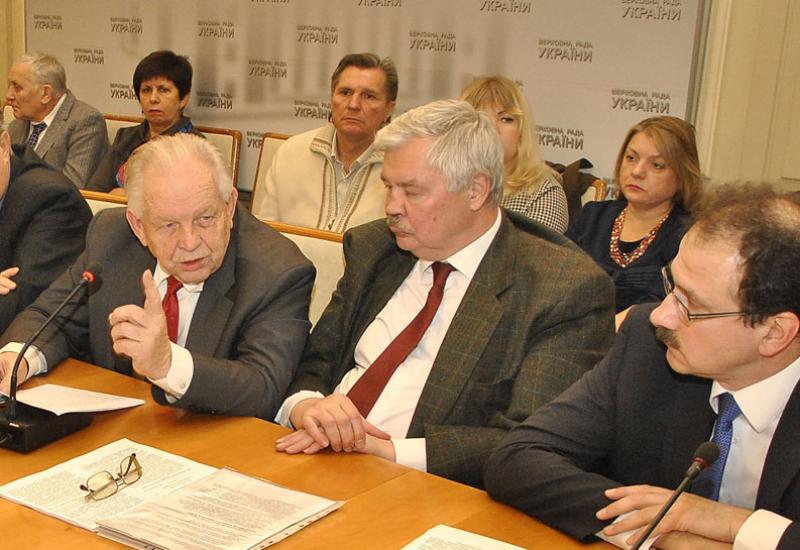 Speech of the Vice-Rector of Research Academician of the National Academy of Sciences of Ukraine M.Yu. Ilchenko at the expanded session of the Committee of the Verkhovna Rada of Ukraine on Science and Education, 15.11.2017

The expanded meeting of the Committee of the Verkhovna Rada of Ukraine on Science and Education, held on 15.11.2017, was devoted to the second anniversary of the adoption of the Law of Ukraine "On Scientific and Technical Activity" and related to the state of implementation of this normative act. Participation in the discussion on this matter was taken not only by the people's deputies and leaders of the educational sphere, but also representatives of scientific institutions and universities of Ukraine. On behalf of the scientists of the higher school of Ukraine and at the same time of KPI Igor Sikorsky took the floor the chairman of the Council of Vice-Rectors of research of the University of Ukraine, Vice-Rector for Scientific Work of our University, Academician of the National Academy of Sciences of Ukraine Myhailo Ilchenko. Here is the text of his speech.

On the 10th of November the attention of all the scientists was attracted to 2 main events.

The first one is a congratulatory message from the Minister of Education and Science of Ukraine L.M.  Grynevich on the occasion of the World Science Day for Peace and Development. In spite of the festive mood, it was emphasized on the achievement of the historical minimum in terms of science financing at the level of 0.16% of GDP, as well as on the tendency of loosing our best scholars and the background of global development of science in the world.

The second is the disclosure of the data of the Sociological Group "Rating", according to which 64% of Ukrainians surveyed said that the situation in the national science was worsening. The same sociological group reported a month ago that according to the September poll, every third Ukrainian scientist is ready to leave the country.

The results mentioned above cannot but bother. But most of all scientists are concerned about the danger of the reality of irreversible changes in science that has already come. Evidence of this is the significant drop in the number of defenders of Ph.D. theses and the number of those who wish to enroll in the postgraduate studies during 2017. In the technical sciences, this fall is up to almost 20%. Furthermore, the number of applications for the protection of intellectual property objects has been reduced. There are other signs of decline as well. A sad picture is supplemented by decisions at the state level regarding to a significant easing of the role of natural sciences in secondary schools, which will further de-intellectualisation of future generations. It seems that the next goal of the Law of Ukraine "On Higher Education" in the part of managing the activities of universities is to serve the same purpose. Ideas for reviewing the list of specialties have already been implemented. In the field of engineering training, their number is reduced by almost a third. Such actions made a significant contribution to the de-industrialization of Ukraine.

Against the background of these negative processes, significant achievements of domestic science in some universities of our country are drops in the bucket. The very universities that under the conditions of the war in the east of Ukraine were patriotically involved in the scientific support of the defense industrial complex. This work has not gone unnoticed. In July this year supreme Commander-in-Chief of the Armed Forces of Ukraine P.O. Poroshenko thanked the scientists of KPI for creating and introducing new developments in the defense sector, in particular the unmanned aeronautical complexes that were put into service in the State Border Guard Service and successfully worked on the western borders of the state, as well as in the Armed Forces of the Ministry of Defense - in the east of Ukraine. On the near-Earth space orbits, the first two Ukrainian university nano-satellites carry out research tasks successfully. These devices had been created and launched into space thanks to the financial support of innovation-oriented business. So, we already have a positive experience of attracting extrabudgetary funds to support startups. By the way, almost 250 innovations developed in thirty Ukrainian universities are presented in the information collection prepared by the Council of Vice-Rectors on Reaserch of Higher Educational Institutions of the Ministry of Education and Science of Ukraine.

For the sake of objectivity we’d like to mention that significant achievements of university science have also been achieved thanks to the introduction of a number of innovations in science management at universities in the MES system recently. These include:

- systematic multicriteria organization of competitions under the auspices of the Scientific Council of the Ministry of Education and Science, including targeted support for new state budget topics that have a military perspective;

- dissemination of best practices in the organization of science at individual universities, for example, SSU and others.

But in general we must state that positive examples of scientific achievements in universities have become a reality "not due to, but contrary to" the current state of science in Ukraine, which in its draft decision of today's meeting of the Verkhovna Rada of Ukraine is objectively characterized as unsatisfactory. Positive changes in the future are targeted by point 3 of the draft Decision, where it goes about the gradual provision of budget financing of scientific and technological activities in the amount of at least 1.7% of GDP by 2020. But, unfortunately, there is no hope that it will be realized.

We know the intention of Prime Minister of Ukraine V.B. Groisman on the substantial improvement of state-funded science financing on the condition of developing and implementing of a peculiar roadmap, i.e.  the introduction of new approaches to the organization of science in Ukraine and the achievement of its significant final results as a basis for the development of the domestic economy on the basis of innovation. In this view, we consider expending it to supplement the draft decision of today's meeting of the Verkhovna Rada of Ukraine Committee on Science and Education with specific proposals, i. e.:

1. Before the second reading of the bill on the state budget of 2018 to increase additional funds for financing science and direct them to the establishment and start of the National Research Foundation. I emphasize that it is additionally to increase, but not to remove from the existing scant competition funding of universities and academies of sciences, as suggested by the authors of the famous European audit.

Professionally organized activities of the National Research Foundation must implement the mechanisms of grant funding for scientists from academic institutions and the university environment.

2. Also, with the means of additional increase of state-funded financing of science, and also, as a matter of priority, in order to overcome the actual discriminativeness of university science, the issue of starting the basic financing of science at universities, in accordance with the scope of the new Law of Ukraine "On Scientific and Scientific-Technical Activity", should be resolved. . The model of the introduction of such basic funding at universities in the light of European experience is based on the leadership of the Ministry of Education and Science and is based on the principles of state certification of universities in terms of their research activities. After that, the universities and their leaders, who will receive the priority right for introduction of basic financing, should be determined according to specific scientific directions. In other words, it is a matter of primary support for those universities that already have significant achievements, staffing and at least 5-year plans for their further development.

3. The following is a proposal to improve the model of competitive selection of scientific and technical developments in government procurement. Improvement should relate to at least two issues. Firstly, the deadlines for the announcement and holding of the competition should be postponed to the previous year in order to allow the decisions made to start financing projects from the first, rather than from the fourth quarter, as it is today. Secondly, the definition of the winner of the competition must be one-stage - without an additional tender, as it is today.

4. To motivate university scientists to create experimental designs, methods and practical confirmation of new results of projects submitted to the MES of Ukraine, the scientific and expert findings on their evaluation should be supplemented with significant additional points: points for received patents for an invention and (or) industrial design must be five times higher than the points for patents for utility models or the copyright registration certificate.

5. To amend paragraph 14 of the Resolution of the Cabinet of Ministers of Ukraine dated from February 15, 2002 No. 153, stipulating that for projects funded by NATO it is not necessary to apply for a state registration of a project and a donor or executor certified copy of a contract concluded between a donor and the executor. The need for such changes is dictated by the fact that now for the state registration of NATO projects, the Ministry of Economic Development and Trade requires a NATO application for state registration of the project and a copy of the contract signed between NATO and the executor certified by the donor and the relevant NATO bodies do not agree to provide these materials. Therefore, no NATO project can be obtained for state registration today. This leads to the fact that the executors of such projects lose the right to receive privileges for customs payments.

To sum it up, we note that three out of five proposals to solve the urgent problems of organization of science are not related to the increase of state budget funds.

Thank you for your attention.