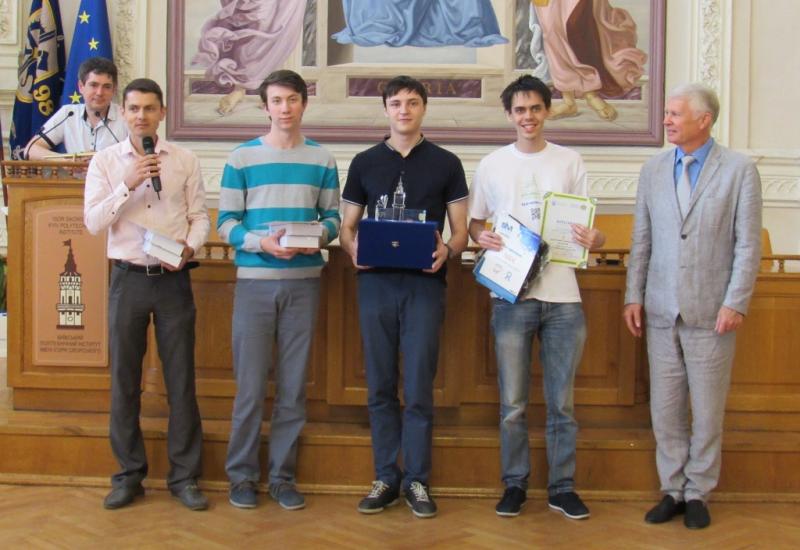 The tasks suggested by the organizers of “KPI-OPEN” contest are never easy ones. That’s why gaining the winning stage is the recognition of the highest level of the team. Above all should the team solve even the third part of the tasks set by the organizers in both stages, it’s the sign of the high quality preparation. But not everyone is usually as successful. Among those who have taken part in this year contest 20 teams didn’t succeed in solving any task not in the 1st tour, not in the 2nd thus gaining zero result. And none has solved all 14 tasks of both tours. That’s why those who have survived all the path should also be deemed as winners. But taking part in the competition is also useful even for outsiders: they have the possibility to see what they need to improve their level. And the winners had the chance to evaluate their skills and see that they move in right direction.

So according to tradition those who have occupied places form 26 to 4 i.e. those who have solved from 3 to 8 tasks in different periods, have acquired diplomas.

And the winners of Contest 2017 were the following teams:

And the main prize – a small crystal copy of a KPI tower, decorated with the symbol of the contest – was presented by the Vice Rector of the KPI Petro Kyrychok to the members of “MIPT SBS” team from MFTI, who have gained 1 place.
Thus the 12th international programming student contest n.a. S. O. Levedev and V.M. Glushkov “KPI-OPEN 2017” has finished.

More details about rules, places and score division, scores gained by each team – look at the official website http://kpi-open.org/.

On the photo – the enroller and co-founder of the Contest Ivan Plotnikov and the Vice Rector of “Igor Sikorsky Kyiv Polytechnic Institute” Petro Kyrychok with winners of “KPI-OPEN” 2017.

The Olympiad will be run for the twelfth time. It is hold by Igor Sikorsky Kyiv polytechnic institute, development group, Vanopl Development Group and under the guidance of Ministry of education and science of Ukraine and Cyber center of National academy of Ukraine. Both its rounds and official events will be regularly held in Igor Sikorsky Kyiv polytechnic institute.

«KPI-OPEN» – is one of biggest intramural competitions in the world. Over the years, Olympiad has changed into a milestone event for young programmers not only from Ukraine and Eastern Europe countries but also for many IT-companies that operate in Ukraine. Its main purpose is to provide room for defining the greatest programmers among students of participating countries, teach them how to work in a team, draw public attention to youth intellectual competitions, facilitate promotion of professional level of young specialists, provide development of Inter-university links and help students from different cities and countries build personal relationships. At the same time IT-companies acting as Olympiad partners get a great chance to find perspective fellow workers among genuinely motivated young people interested in their future profession. Besides, specialists of IT-companies will share their own experience, knowledge and vision of future field development with members of Olympiad during special presentations, seminars and lectures. Traditionally, the moderators of Olympiad offer various events in framework of its culture program: Kyiv excursion, Dniper river shipboard sail, master class on beach volleyball, kayaking and even jazz concert etc.

Increasing number of participants of this tournament, expansion of its geography and information support show the interest to "KPI-OPEN". Total statistics over the years of Olympiad is the following: 851 teams took part in the Olympiad, 3235 students from 14 countries, 69 cities and 162 higher educational establishments. It is worthy to note that as of June, 23, 107 teams from 10 countries had been already enrolled to take part in the Olympiad. According to all mentioned criteria, over the years of its existence, "KPI-OPEN" has been one of the biggest intramural Olympiads for programming students.

The Olympiad is hold in accordance with original rules correlated with international ones. Such feature as well as lack of necessity to pay registration fee makes "KPI-OPEN" look like ideal platform for gathering young programmers from Ukraine and other countries.

Sponsors of the Olympiad 2017 are a series of famous IT-companies. Information sponsors are leading relevant media and Internet resources. Thus, the winners and runners-up of the Olympiad will be granted also with sponsors prizes.

Mass media representatives and all those willing are expected at the opening ceremony and final parts of the tournament.

For more information about working hours of the Olympiad, see website: http://kpi-open.org/schedule/.