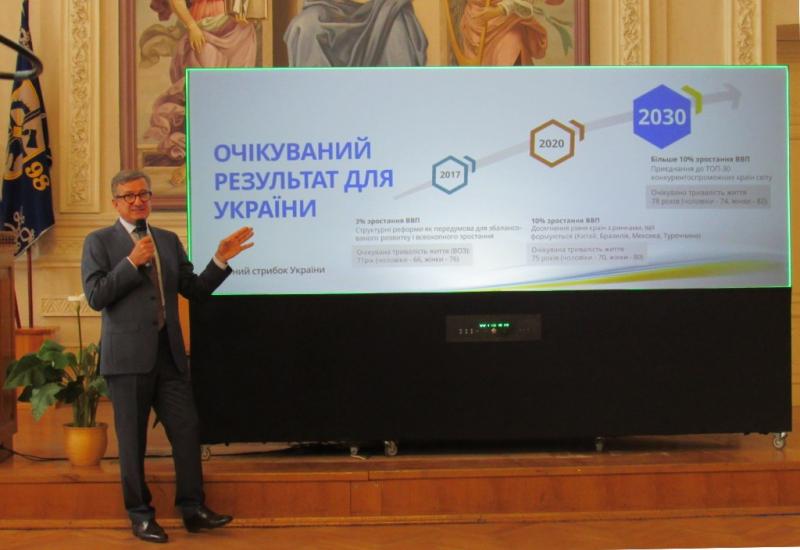 Ukraine in 2030: how it can look like? How to be one of developed countries? Which reforms are necessary for that and what is their main purpose? In a word, which development model do we have to choose?

Answers to these questions can be found in Sustainable Development Doctrine “Ukraine 2030”, presentation of which was hold in May, 25 in Meeting Room of Academic Board of Igor Sikorsky Kyiv polytechnic institute.

The purpose that was set in the document as an indicator of the development of country is the inclusion of Ukraine in thirty the most developed countries of the world. In order to get it, it is necessary to change the paradigm development, redirecting it towards stimulation of development of domestic market. Herewith, in current conditions the main factor and catalyzer of economic increase of national economy that can be only human capital asset. Thus, the main foundation for provisions of the Doctrine is a new socially-oriented model of the development, the greatest value in which is the person and its driving force – creative potential. In other words, the human is the center of suggested model of social capital and the priorities in this model are life, health and wellbeing of the human, their freedom, equality, safety and of course education, science and culture.

Relying on the results of research and system analysis that were carried out by leading scientific institutions of Ukraine, the authors of the Doctrine offered antirecession program for Ukraine that is based on elimination of 6 braking factors that hinder economical development of the country. Among the main tasks in this respect is unshadowing of the economy, decrease of energy capacity of GDP, modernization of system of pension contribution and others. They have also emphasized strong points of national economy: the presence of educated human capital asset, geographically advantageous location, diversified infrastructure, unique black soil (20% of the world black soil) etc. On the assumption of that, having compared economic model that our country uses with redirection towards economic sustainable development suggested in the doctrine, they designed new - innovative model of the country development. One of the constituents that was used in the process of creation of this model, was “Foresight of economy of Ukraine in terms of midterm (to year 2020) and long-term (to year 2030) horizon periods”, performed by scientists of World Data Center for geoinformatics and sustainable development of International Council of Science (ICS) at Igor Sikorsky Kyiv polytechnic institute and Institute of applied and system analysis of Igor Sikorsky Kyiv polytechnic institute and Ukrainian NAS under the guidance of academician of Mykhailo Zgurovsky.

The innovative development model that has been offered has to be the basis for further calculations and specification in detailed program of development of Ukraine to year 2030. Since according to Sergii Taruta, the document that has been presented – is namely the Doctrine, not the Program and one of the purposes of its authors is a creation of particular platform that any person can join and show their own vision and ideas regarding the development of the country.

Recently the Doctrine has been published as a book that was presented during the meeting as well. Thus, after it was presented to polytechnics and giving answers to questions asked by listeners there was an autograph signing session. The head of the writing team, Sergii Taruta signed books for participants of the presentation.