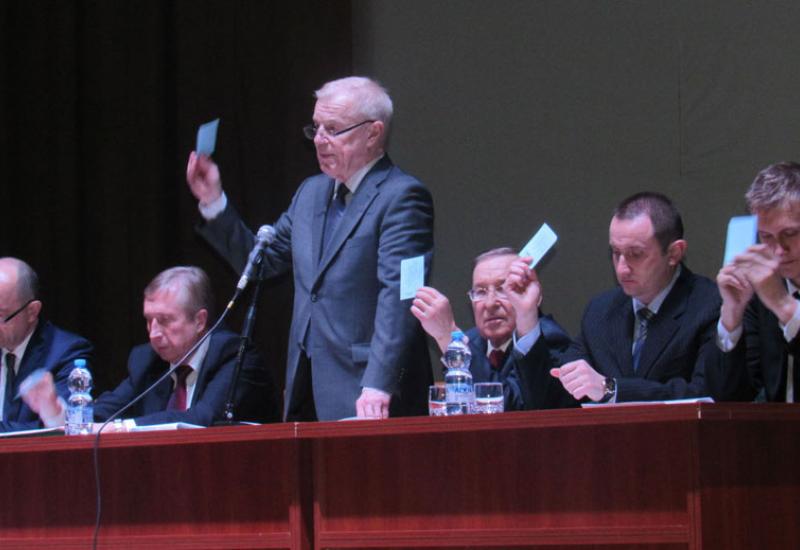 Rector Institute M.Zgyrovsky made a report on the implementation of the Collective Agreement between April 2016 and April 2017.  In his report he provided a comprehensive profile of the main University’s activities: educational work, science and innovations, future-direction project, international connection, administrative and economic work. Rector drew attention to the difficulties had occurred last year and during the early part of this year. The manner of university financing has been changed. Now the Government allocates fund according to the total number of students instead of the number of accepting students into the first year. Furthermore, from year to year the number of accepted students is lower than public procurement owing to the high standards set in the university. This academic year there was no admission for educational qualification level Specialist. That has led to a decrease in the number of students and reduced funding. Small study groups might necessitate the establishment of blended study that is face-to-face training and distance learning. Reduction in the number of students may lead to reduction in the number of academicians in time for a new educational year.

Rising energy prices, State’s inability to fund communal services have resulted in month disconnection from the heating in educational audiences and double-shift system. Administration and Trade Union was forced to disconnect heating for this winter in order to reduce costs. Reduction in the scholarship programme caused many challenges since January 2017. Rector reported on the measures adopted by administration to mitigate impact of negative external factors. Among the measures is the development of cooperation with investors and sponsors. In particular, building of new campus has intensified by continuing to attract new investors. Rector concludes the report with analysis of implementation of Collective Agreement.

The Chairman of Workers Trade Union V.Molchanov presented the Trade Union work being carried out in protection of university workers’ rights. He told, inter alia, that in the reporting period university workers received their salaries and bonuses on time. He presented the Trade Union work on staff health improvement. He pointed out that the number of diseases and thus a number of sick leaves increased owing to inadequate temperature condition indoor in winter. V.Molchanov stated a number of public demonstrations organized by Trade Unions. Many educators including Igor Sikorsky Kyiv Polytechnic Institute staff actively participated in these public demonstrations. He noted that there still is a need to hold demonstrations. In closing, the Chairman of Trade Union reported that Verification Commission of Collective Agreement ensured its implementation and found satisfactory and commented positively upon the Rector’s work during the reporting period. He also urged the Conference to approve University Collective Agreement in the Commission proposal for the next period.

The Chairman of primary student Trade Union A.Havrushkevych presented everyday work carried out to improve the living conditions of the student and to reduce external influences. In particular, the Trade Union managed to reduce registration time for freshmen from three month to one month last year. Earlier in the year, a subsidy processing in dormitories was organized. Students often held protest and picketing. More than 60 letters and appeals were addressed to the government. Student Trade Union was heavily involved in organizing mass cultural and sport activities. Union A.Havrushkevych reported, that student Trade Union commended positively upon work of the University Administration and the implementation of the University Collective Agreement.

The Chairman of the Kiev City Organization of Trade union of education and science workers. O.Yatsun reported on troubled relations between the trade unions and the public authorities, especially the Government of Ukraine. He stated that officials have seemed to respond more to those attempting to increase their income through workers than to the trade unions. He reported that trade unions are planning to hold mass protests and called upon university workers be ready for that.

On the proposal of the Chairman of Trade Union V.Korsakov, Rector’s and Chairmen of Trade union reports were adopted unanimously, Rector’s work was commended positively; Collective Agreement and Labour Protection Agreement were implemented in 2016.

Thereafter, Conference reviewed and approved all sections of collective agreement and the Collective Agreement between April 2016 and April 2017 edited by Working Committee under the chairmanship of Deputy Chairman of Trade Union Stuff Committee of Drafting Commission M.Bezugliy.