Lecture by Extraordinary and Plenipotentiary Ambassador of Republic of Korea (video) 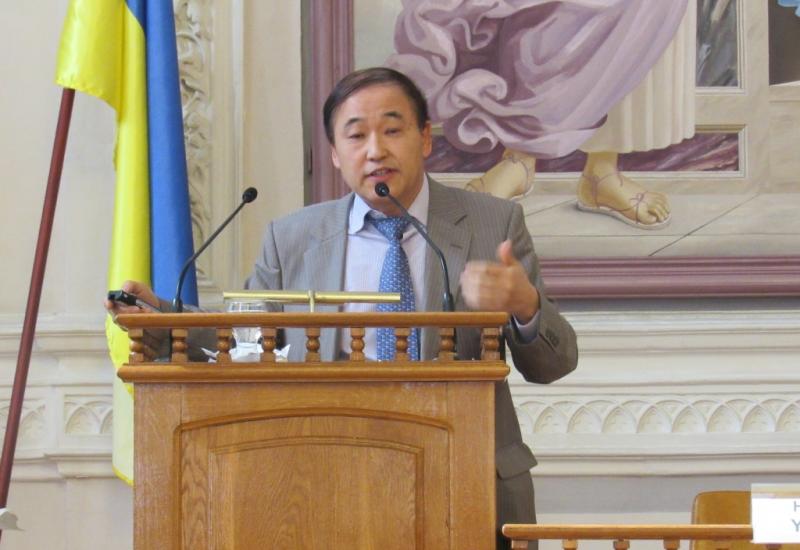 First visit of Extraordinary and Plenipotentiary Ambassador of Republic of Korea to Ukraine Lee Young-Gu to Igor Sikorsky Kyiv polytechnic institute that took place on March was extremely intensive. After familiarizing with the university itself, State museum of technical equipment at the university and discussion of cooperation issues with administration of the university, the Ambassador had a meeting with students and postgraduates, delivered a lecture devoted to Ukraine and Korean economical relations.

The lecture itself consisted of two parts: the first part related to issues of economic cooperation of our countries (it was called “Perspectives of bilateral Ukrainian and Korean relations”), and second part (“Economical miracle of Korea on the river Han) was devoted to the experience of overcoming the scourge of economical underdevelopment, South Korea has suffered for the last half of the century. It’s worthy to have some clarification about Han river: it is often associated with the capital city Seul located on its banks. Thus, it is almost the same for Korean citizens as Dnipro River for Ukrainian people.

The head of diplomatic mission of Korean Republic took his position in the end of summer 2016. He is intensifying his efforts to develop new concept of Ukrainian and Korean economical relations. New working group on large scale program – General plan of economical cooperation Ukraine-Korea, whose members on behalf of Ukraine became representatives of governmental as well as science, business and education institutions including National technical university of Ukraine “Igor Sikorsky polytechnic institute”, was created. Thus, a meeting with administration and university students is one of steps on the way to establishing contacts between scientists, representatives of high-technological business of South Korea and their Ukrainian colleagues from Kyiv polytechnics. In short-term future and as next step is to establish Ukrainian and Korean center of science, technology and innovation on the basis of Igor Sikorsky Kyiv polytechnic institute. Lee Young-Gu spoke about that at the meeting with rector of the university, academician of Ukrainian NAS, Mykhailo Zgurovsky, pro-rector of for international cooperation, correspondent member of Ukrainian NAS, Sergii Sydorenko and representatives of international department before the lecture. In general, in the course of previous discussion he outlined a series of lines with primary focus on possible cooperation; most of these lines are related to subject matter researchers of Igor Sikorsky Kyiv polytechnic institute are working on. This is a partnership in the field of aerospace technologies, new materials creation, information technology, biotechnologies etc. Guest took also interest in the work of Scientific park “Kyiv polytechnics” and the whole environment of Igor Sikorsky Kyiv polytechnic institute that have great potential for cooperation with related structures of Republic of Korea.

His lecture, Lee Young-Gu started with demonstration of short video film about dramatic and at the same time new heroic history of South Korea that was able to overcome all difficulties they faced in XX century. For many those been present it was first meeting with this Far East country. Country history of which numbers over 5 thousand years with nearly 1 thousand wars and whose population despite all those ordeals preserved their uniqueness and desire to live. Thus, the manager of diplomatic mission in Ukraine spoke in detail about the country and its experience of building new modern that for just half of the century has managed not only to climb out of poverty but to become one of the most developed countries of the modern world. He focused mainly on the fact that in the mid 50s Korea was one of the poorest countries on earth and now economy of South Korea takes 11th position among the most powerful ones on planet, 6th position in the world export of products and services and 9th in the world trade. From those being in need, it became one of those countries giving aid to those that are in need. According to growth rate, before 2025 economy of South Korea according to its Extraordinary and Plenipotentiary Ambassador has to take 9th position in the world rating and according to per capita income 3d position.

Lee Young-Gu also mentioned economical potential of Ukraine with its powerful aerospace industry and developed IT sphere, vast resources for agricultural business development and great geographical position thanks to which our country has unique logistic opportunities, etc. According to him, the most perspective cooperation lines between our countries in economic field are agricultural sector, IT sphere, power industry (including renewable one), financial sector, medical sphere and common production of high-speed vehicles.

He finished his speech accompanied by applauses with several quotes that probably hold keys to any successful business: “If you need to do something, do that now”, “If somebody needs to do that, let it be you”, and “If you must do that, do that with pleasure”.