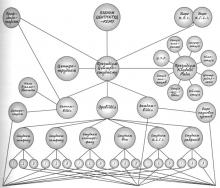 In January 1922 Civil Engineering Institute was reorganized into the Department of Transportation Engineers in the composition of the KPI. August 26, 1922 Order of the People's Commissariat under the number 1366 the institute was included among patronized universities, appointed 50 students scholarships and provide jobs for the summer practice [19, p. 7]. First, at the Faculty of Transportation Engineers it was trained technical staff to the land and waterways of Ukraine, later - specialists in operation of railways and air routes [14, p. 12]. According to the registration of students, held for the first time in winter 1922, there were 2081 in 1921/22, only 75 people graduated from the Institute [15, p. 11]. In the autumn of 1922 in high school there were enrolled 510 students, of which the workers - 138, 111 peasants, working intellectuals and employees- 261.

A group of experienced students from rabfac at the beginning of 1922/23 repaired four steam boilers which did not work since 1916. All the rooms of the Institute began to be heated and supplied with water.

1923 there were repaired premises and restored technical equipment of laboratories, workshops designed aircraft, radar laboratory, research station of agricultural production, electromechanical laboratories, workshops for the repair of precision instruments and the like. It was reactivated library, implemented inventory of books, started regular subscriptions to newspapers and magazines, including foreign ones. The educational process was gradually stabilized. Efforts were made by subject commissions to make curricula, course programs, the development of new teaching methods and, most importantly, implemented a gradual transition from the lecture training for laboratory study science, practical work at enterprises, the links between science and production [14, p. 34].

September 1, 1922 on the basis of the Faculty of Agriculture it was established the Agricultural Institute. Its rector was Vice Rector KPI, professor I.I..Kasyanenko [15, p. 10]. Two institutions - Polytechnic and Agricultural - along with their technical school, trade union committees constituted a single training center.

If in 1922/23 collective efforts of the Institute were aimed at restoring the university sector, the 1923-24 years - to improve and develop training programs to the purpose of the university - to produce engineers organizers generalist, as footage of narrow technical specialties prepared technical. In 1924-25 Institute made efforts to the further expansion of ties with industry, organization of summer work experience, etc. [18, p. 40].

We note that in June 1923 a mandatory element of the educational process in the institutes and colleges has become the industrial practice [20, p. 6] for 2-2.5 months. Students of the Institute after the first year had the practice in educational workshops and laboratories under the guidance of teachers, after the second and the third year - in the enterprises of the republic (20-25% of training time) [21, p. 67]. For the organization of industrial practice in September 1923 it was created under Ukrgolovprofosviti the central committee. The similar commissions were created in universities of Ukraine. Teaching and training institutions subject commission developed plans for practices. The introduction of mandatory work experience in the educational process was not easy, because the state-owned enterprises have failed to provide the required number of jobs to students and to provide funds for their maintenance. Subject Commissions universities did not have time time to develop plans and programs of practice, there was no proper control over its passage by the administration. Work of students, who are often not used in the specialty [2, p. 167] has a low efficiency.

In general, n 1923/24 only 30% of students undergone the industrial practice. Over time, the mechanism of its implementation improved, which contributed to a combination of direct

In 1925, there were developed new ways and methods to improve the performance, capacity discipline students, set strict deadlines learning. Attending lectures, seminars and other training became mandatory. This has contributed to positive changes in the learning process [23, 24, p. 408. 11], although the success rate remained low. This situation can be explained by both objective and subjective factors: material insecurity, the use of students on the organizational and administrative work, excessive workload of public orders, low initial level of general education [25, p. 512].

Therefore, in the following years there were taken additional measures to improve the academic performance of students: the transition to full-time education, groups and commissions created to deepen the scientific organization of labor. The educational process was gradually stabilized, performance records was established. Graduates of engineering schools, and in particular the KPI, became highly skilled specialists, known engineers, scientists, university professors.

At the Faculty of Mechanics in the 1924-1926 there studied S.P.Korolev - academic, general designer of the world's first artificial earth satellites and spaceships. "Our country and the whole world science in the person of Acad. Korolev had the scientist, whose name will always be associated with one of the major achievements of science and technology of all time - the opening of an era of development of mankind outer space "- said Academician M.V. Keldysh. "For me, Sergei Pavlovich was a sample of the great scientist and man, the ideal to which all should aspire", - stressed Acad. B.E. Paton - a graduate of the KPI. In the main building there is an audience named after S.P. Korolev. To commemorate his contributions it was installed on the building of the Institute a memorial plaque.

As a result of work carried out in 1921 - 1925 years in engineering universities it was gradually adjusted the learning process, new principles of teaching were developed, there has been a convergence of universities with industry.

It should be noted that the curricula and programs of universities at that time were not rigid, their content changed annually [26, p. 210]. There was an acute shortage of educational materials. So, 1923/24 the printing of the physico-mathematical, technical literature in Ukraine amounted to only 5% of the total circulation of books state publishing house, to the same level of scientific and methodical literature, this did not always meet the requirements of time [3, p. 119].

Drastic changes in the social composition of students in the direction of its proletarianization due to the presence of working faculties, which were intended to give for a short time the knowledge of the secondary school program. It was implemented a class approach in the selection of students admitting commissions. In the KPI it was enrolled 249 people from workers and peasants, representing about 50% of the total set [27].

One must say that the student work, introduced in 1921, has brought to the institute more than 80 thousand working hours, not counting the work of students who worked voluntarily. This practice was preserved in the KPI up to 1925. A considerable work in heavy material conditions has made it possible to prepare already in 1924-25 almost pre-war peak of engineers in all faculties Institute "120, p. 5].