Impossible is nothing: new advances in computational physics 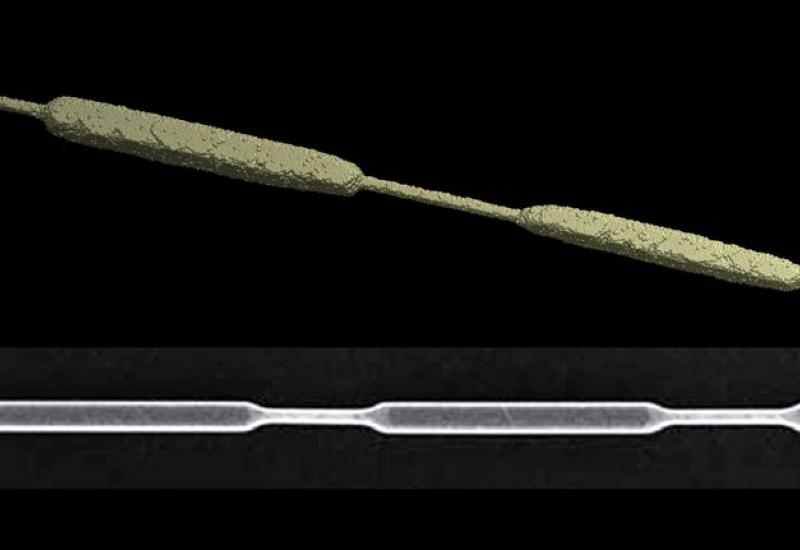 Anyone remembers the first-page considerations in textbooks on statistical physics grounding the necessity of applying statistical methods to the study of molecular phenomena. The exact description of the motion of molecules gives differential equations. But there are 1020 molecules in one cubic centimeter of gas, and for the exact description of their motion it is necessary to compile and integrate almost the same number of differential equations. It is absolutely impossible. Therefore, statistical methods have to be applied to create theories of molecular phenomena.

These considerations should now be considered obsolete. First, physicists deal with objects that consist of not 1020, but only 106 atoms in nanoelectronics. Second, with increasing power of computers, you can carry out such calculations, which were only a miracle for about twenty years ago. This made it possible to solve such problems in describing the motion of atoms in real systems, which were considered absolutely unresolvable two decades ago.

These are the very tasks that the acting Head of the Department of General Physics and Solid-State Physics of the Faculty of Physics and Mathematics, Dr. Sci. in Physics and Mathematics, Professor Vyacheslav Mykolayevich Gorshkov deals with. The previous year, our newspaper talked about some of the results of his research in the field of computer modeling of physical processes. Recently, he has told our reporter about his newly received interesting results.

The most significant challenge for the theoretical physicist, perhaps, is the problem of finding the task. It does not necessarily have to be what is called the great task of science. But it is desirable that the results were interesting to many theoretical colleagues and have practical significance. In this regard, I smiled at me. Over the past two decades, I have succeeded to find and solve very curious tasks through collaboration with researchers from leading US science centers, the Center of Excellence in Materials Science at Clarkson University (Potsdam, NY) in particular. Between 2001 to 2006 I worked there as a resident researcher, and now I continue to work as a Research Professor (without payment) and as responsible for implementing the partnership agreement between Igor Sikorsky KPI and Clarkson University.

In the summer of 2002, I developed a so-called statistical mesoscopic model for studying the growth of colloidal particles in a supersaturated solution. On its basis, the problems of controlled synthesis of nanoparticles and their sintering are successfully solved.

In 2017, the task of reverse process simulation appeared - the nanowire decay on a chain of small clusters. Such chains are used in nanoelectronics as waveguides. The production of such waveguides by obtaining individual nanoparticles and their subsequent ordered arrangement on the wafer is a very difficult to implement process and even more difficult to control. More advanced is another way - to place nanowire on the wafer. Under certain conditions it will break down into a chain of nanoclusters within 15-30 minutes itself, the periodicity and size of which determines the proper temperature regime. Here you have a ready-made waveguide.

Needless to say that the nanowire materials and their processing modes selection through trial and error is a recipe for disaster. All this should be explored on models first. Accordingly, the problem of numerical simulation of the process of nanowire decay at a certain structure and temperature regime occurred. This problem was tried to solve on the analogy of the classical liquid jet instability (amorphous substance). Such an analogy should coma as a surpsrise. After all, the properties of substances in the formation of nanoparticles significantly differ from their properties in macrobodies. For example, silver in nanoparticles melts at room temperature. Consequently, at first glance, the analogy between the liquid jet instability and "drop" decay of the nanowire seems to be justified.

However, our studies have shown (J. Appl. Phys., December 2017) that the crystalline structure of the nanowire has a significant influence on the dynamics of the near-surface layers of atoms in a number of materials. In this case, the nanowire, notionally, can be "cut" from a solid single crystal in different directions. Consequently, it is possible to control the decay rate of nanowires, the shape of nanoclusters and their size. But the last time there was a reverse problem. To form separate ordered nanoclusters in the mode of diffusion deposition of "free" atoms on its surface by withholding the nanowire from the decay.

The photo shows quite recent results of the search for controlled synthesis of nanoclusters using the above-mentioned statistical mesoscopic model. There you can see the forms of individual elements of the chain: an elongated facet cluster (Fig. 1), a pyramidal-like "drop" surrounded by six sides (Fig. 2), flat diamond-like formation (Fig. 3). Along with the theoretical results is presented for comparing the images of the same elements obtained in real experiments on a tunneling electron microscope. It is seen that the simulation results coincide well with the results of experiments.

I may note that in my models calculations are made for 700 thousand atoms. In this case, this was quite enough - the various effects are observed very well. But in models of growth of colloidal particles, calculations were made for 3 million atoms.

The simulation is performed on two 8-core computers with gigantic RAM located at Clarkson University. To get cluster images that are presented here, computers had been working for more than two months in a row.

The students of the FMF Volodymyr Tereshchuk (6th year) and Andriy Moroz (4th year) assisted me in these studies. The obtained results will help to reveal the mechanisms of influence of various physical factors on processes and allow to find desired control methods of nanoprocesses.

But our current tasks are unconditioned only be nanophysics issues. V. Tereshchuk participates in studies of acoustic metamaterials in Imperial College London, which, oddly surprising, realize the classical analogues of quantum phenomena. The simulation of biological processes stands on a front burner. We will try to determine the role of some factors in the Alzheimer's disease development together with Cornell University. If these factors are the result of the disease or the result of the defense reaction of immune system to its development is yet to be seen.

It should be noted that medicine is more closely interwoven with physics. In our 2016 study (Gorshkov V., Privman V., Libert S. Physica A: Statistical Mechanics and its Applications, November 2016, pp. 207-216) the dynamics of percolation properties of living tissue was investigated. Uncluttered, I may say that the unfolding results astouned me personally with the infinite connections of various factors in the living organism I was clueless to. For example, we did not focus on the role of so-called senescence cells (cells are incapable to devide, i.e. permanent cell). All of a sudden, a mathematical model generated an unknown result for so long. A world-famous group of biologists in real experiments with mice (Baker, D. J. et al., Nature 530, 184-189, 2016) discovered the result alongside us.

To this end, I will mention my post-graduate student between 2002 to 2004 Oleksandr Zalalov. He successfully bridged over the difficulties of plasma phenomena simulation in focused ion beams lenses with high current. He is now working in the United States for the group of mathematical simulation of the worldwide renowned company "Merck", where he investigates the chemical properties of future medication, and the peculiarities of their transport in the body and many more by methods of numerical simulation. This rewarding career is not the solitary example. Therefore, our graduates have a good chance of professional becoming. But this chance is fighting one. Programming is just a tool. One should face physics, chemistry, mathematics and goodness knows what else... All life.