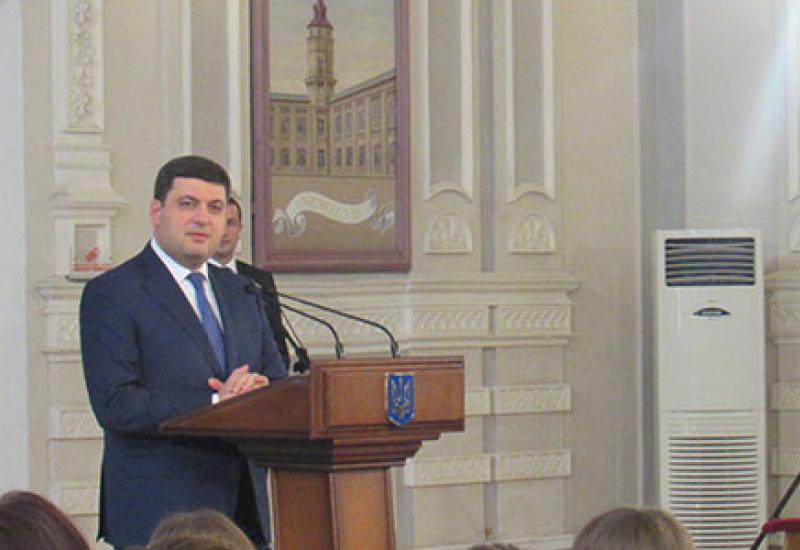 Prime-minister of Ukraine, Volodymyr Groysman spoke to students and teaching staff of Igor Sikorsky about the course of reforming of national economy, system of social protection and health care, power energy sector, infrastructure development, decentralization, work of anti corruption authorities and a lot more during the meeting that took place on 23 December.

He covered also plans of government for the next year and answered numerous questions of students.

However, prime minister started the meeting with Kyiv polytechnics not with statistics but with defining strategic plans of Ukrainian government. "Our task and task of our government is to ensure that each Ukrainian has future, stressed he at the beginning of conversation with students.

The way to achieve this goal, the government started in 2016. According to Volodymyr Groysman, it signed the beginning of complete renewal of our country.

We have some achievements on this way. For example, the government managed not only to stop the decline in economy but also stabilize the situation, ensuring at that social standards increase by 16%. "Situation started to change. We have to accelerate the pace of these changes and be successful in many important things", stressed Prime minister of Ukraine. As for the next year, according to the head of executive power, it has to become the year of steady growth.

In his speech, Volodymyr Groysman, stopped at some key fields that fundamental reforming of management system of which is of great importance for such a growth. This is first of all, transport infrastructure, the state of which has been deteriorating for the last two decades; this is power energy industry that has been absolutely dependent on imported energy resources; this is terrible over regulation of businesses etc. Public officials are currently actively solving problems that has been accumulating in these fields for years: according to Volodymyr Groysman, recently at one of governmental meetings 367 regulatory acts that interfered with business work have been abolished; in 2016 Ukraine managed to recover 816 km of Ukrainian roads and next year this number is going to be doubled; a series of means towards increase of own gas production are being implemented, their purpose is a transition to only own Ukrainian gas production and refuse from foreign purchasing.

Prime minister also mentioned in his speech the course of government decentralization that started to bring first results, fight with corruption, implementation of e-declaration and some other things important for Ukrainian citizens.
He finished his speech with the words "Ukraine will be successful!".

However, the meeting didn't finish at this - the meeting was followed by questions of students that Volodymyr Groysman paid attention to. There were many questions related to various problems - from 3G Internet access in Kyiv metropolitan and simplification of visas receiving for sportsmen for taking part in competitions to mechanisms of political responsibility and perspectives of education and science development in Ukraine. However, the most of questions related to problem that appeals directly to every student, namely change of scholarship system and principles of scholarship distribution.
Threat of dramatic decrease of a number of people that will be receiving scholarships next year; uncertainty of criteria that envisage social and academic scholarship distribution are of great concern for students and their concern they expressed to the head of government. Thus, Volodymyr Groysman promised to hold a meeting of executive officers of Ministry of Education and Science, Ministry of social policy and representatives of students’ core group to find optimal decision. "How to build wisely motivation and social protection systems in students environment depends on us, stated he. I think that this task has to be fulfilled. Actually, we will definitely reach a compromise but it will be done if there's dialogue".

On Friday, December, 23, there will be a meeting with Prime-Minister of Ukraine, Volodymyr Groysman and students of National technical university of Ukraine “Igor Sikorsky Kyiv polytechnic institute”.

The venue event will take place in the meeting room of Academic Board of the university (building № 1) at 13.00.

Head of government will be discussing with students the progress of reforms implementation in passing year and will also speak about reforms (in the field of education in particular) that government is going to implement in 2017.

University students are welcomed. Those who are interested in the event, please pre-register in dean’s offices of your faculties on 22/12/2016.