International Symposium on the project "Sentinel-2 for Agriculture" 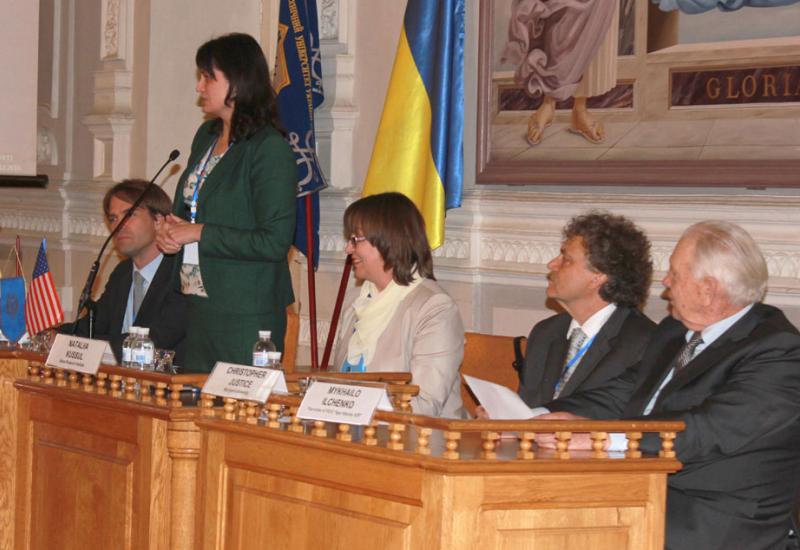 In the 10th of October, 2016 in "KPI named after Igor Sikorsky" International Symposium hosted by the European Space Agency project "Sentinel-2 for Agriculture" in the context of a global program of satellite Agromonitoring GEOGLAM.

The aim of the symposium was to discuss with the concerned departments and agencies state and prospects of innovative satellite technology in strategic sectors of Ukraine's economy, particularly in the agricultural sector. The symposium gathered in the meeting room of the Academic Council of the University of world leaders in the provision of satellite information, consumers, representatives of science and students.

At the symposium was attended by representatives of state bodies of Ukraine, organizations using satellite data in operational mode, scientists Institutes of NAS of Ukraine, higher education institutions, program manager GEOGLAM, representatives of the European Space Agency and leading experts in satellite Agromonitoring from the European Union, the United States, Canada, and leading experts in the field of satellite Agromonitoring.

Opening the symposium, Deputy Minister of Agriculture and Food Elena Kovaleva noted the important role of satellite technology for innovative development of our country and emphasized the importance of project products obtained for the whole territory of Ukraine "Maps acreage nationwide high resolution for individual fields is an important source of information that provides a transparent and impartial assessment of agriculture from space. "

Forum held in CPI them. Igor Sikorsky is no coincidence, because the university created the space program, which envisages the development of diverse space technologies and launching a series of nano-satellites. For the second year in orbit Nanosatellite functions, developed by experts and students of several faculties. The state of and future directions of the space program at the University of detail presented pro-rector "KPI them. Igor Sikorsky" NAS of Ukraine Mykhailo Ilchenko.

Recently, the rapidly growing amount of information that it regularly Earth observation satellites provide the European Union and the United States. This information is used by countries to support decision-making to build a sustainable development strategy, solving problems of food security and minimize the negative impact of climate change on the environment and other global problems.

World leader in this area is an international initiative Agromonitoring satellite GEOGLAM, the European contribution to the program which is run Copernicus satellite Sentinel. In connection with the commissioning of Sentinel satellites within the program Copernicus European Space Agency (ESA) in 2014 launched a project to create an automated system to obtain food Sentinel-2 satellite. In operating the project goes into operation in 2017, in 2016 implemented a pilot deployment and testing of the system.

In 2016 Ukraine was the only country for which the demonstration project implemented automatic generation products processing satellite Sentinel-2 for individual regions across the country. It is important that Ukrainian specialists provide a full cycle of information - from receiving satellite and ground data to form end products for consumers. Current results and prospects of Ukraine presented the project to the program manager GEOGLAM, Maryland univesytutu Professor Chris Justice, Project Manager Sen2Agri from the European Space Agency Benjamin Koets, Project Manager of the European Union, the Catholic University of Leuven Professor Pierre Deforni and project leader of Ukraine, professor "KPI them. Igor Sikorsky" Natalia Kussul. Starting next year, plans to deploy a system to regularly create products throughout the country and development project to connect data from other satellites and adapting products to the needs of users.

Ukraine is one of the largest players in the grain market and yet has a glorious history of the space industry. The lion's share of gross domestic product in Ukraine today provide agriculture and information technology. Modern innovative technologies for satellite monitoring of agricultural land, predicting crop yields and gross yield of major crops is extremely important for Ukraine. Therefore, the synergistic combination of the above competencies in satellite projects Agromonitoring based Sentinel involving world recognized scientists and students will give a powerful impetus to the innovative development of our country in the future.