Final conference of the project «UKRAINE» 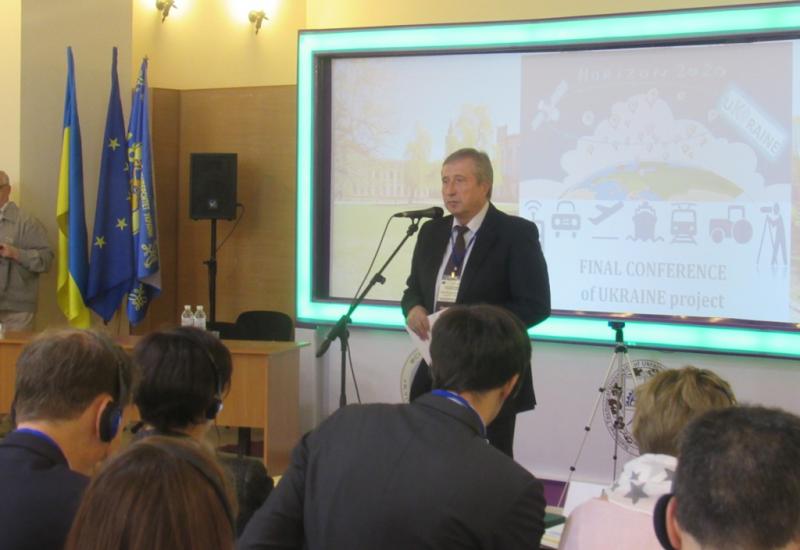 On 21st September in NTUU "Igor Sikorsky Kyiv Politechnic Institute”, the conference of “Ukraine Distribution in technology, knowledge and innovation based on the use of EGNSS system” took place. It was the final conference of the project “UKRAINE”. There was summed up the work of consortium under the project that have been started in January 2015. Consortium was consisted of nine organizations from six European countries.

The project «UKRAINE» (Ukraine Replication, Awareness and Innovation based on EGNSS) was founded by the "Horizon 2020" programm. "Horizon 2020" is the framework programm of the European Union in the field of research and innovation. The project was created for the implementation of the opportunities that have been emerged due to the signing of the agreement between Ukraine and the EU. This agreement was concerned the field of global navigation satellite systems (GNSS) and uploading Ukrainian market by applications that use GNSS systems to Galileo and EGNOS.
EGNOS (The European Geostationary Navigation Overlay Service) is a satellite system based on differential correction. It was created for increasing the reliability and accuracy of the GPS-positioning in Europe. Today EGNOS is cover most European countries. Ukraine will be joined to this system thanks to the project «UKRAINE».

So the project became a platform for the development of business relationships between organizations and companies that work in the field of satellite navigation or use such systems in their activities. Also project «UKRAINE» provided the basis for common researches and development of various applications.

At the beginning of the conference the principal of "Igor Sikorsky Kyiv Politechnic Institute” academician of the National Academy of Sciences of Ukraine Michael Zgurovsky emphasized: “For Ukraine an extremely important thing contributing to the development of the European Geostationary Navigation Overlay Service EGNOS. This is important at the point of improving the safety of our airline, land, maritime services and logistics systems and business. It is also very important at the point of integration into the European business, European communication systems, and the European Union in general. So we have paid special attention to this project. We have tried to appeal to project execution the best scientific, industrial and business structures.

Participants of the conference were welcomed by deputy minister of education and science of Ukraine Maksym Strikha. Ekaterina Strelkova is an expert on the development of the European market for GNSS, she welcomed all the participants from Prague via Skype. Also there were Egor Dubinsky, he is national coordinator of National Contact Points of framework programme of the European Union in the field of researches and innovations "Horizon 2020" and Peter de Smet who is an expert of the European commission of Galileo and EGNSS. The presentation of the main results of the project was made by Monica Pesshe. She is a coordinator of the project «UKRAINE» and managing director of «Valdani Vicari & Associati Brussels» (Belgium).

Maksym Strikha marked: “Entering Ukraine to the European program" Horizon 2020 "was important for us not because of some grants, although this fact is invaluable help considering difficult situation in which we find ourselves. Also participation in this project is important because it allows us to upgrade our scientific landscape. We can make it more dynamic, establish close links between researchers and businesses. Success stories of Ukraine in program "Horizon 2020" is now mainly connected with research projects. But it is very important that today we have an opportunity to hear about the results of a project that goes beyond the limits of research projects. There is a huge reserve for Ukraine, and there is tremendous opportunities for us. It is no coincidence that today we gathered at the National University " Igor Sikorsky Kyiv Polytechnic Institute ". Probably among all our universities and research institutions, " Igor Sikorsky Kyiv Polytechnic Institute " has now the largest and most successful experience in collaboration with businesses and the implementation of large-scale innovative projects. "

Conference plenary meeting was opened by Konstantin Volokh speech on the subject "Legal aspects of implementation and usage EGNSS in Ukraine." Konstantin Volokh is vice-chief of the National Control and Testing Center of Space Facilities of National Space Agency of Ukraine.

It should be noted that the performances in this part of the forum were devoted not only to general organizational aspects of the usage of global navigation satellite services but also research and technology questions. Themes of the performances spoke for itself: «EGNOS in aviation" (Santi Solei is the founder and CEO of "PildoLabs", Spain); "method of signals monitoring in aviation based on GNSS - the results of measurements and conclusions" (Carmen Sommer - the software developer in the company "TeleConsult Austria ', Austria); "Innovative solution based on system EGNOS for multimodal logistics in Ukraine"(Frederick Ronse – CEO in the company « Ovinto », Belgium).

In fact, performances at the plenary meeting defined directions of the two sections that run in parallel after meeting. They were "Aircraft" (the head was Vasily Kondratiuk the director of the training center 'Aerospace Center’ of National Aviation University) and "Multimodal Logistics "(its moderator was Sergei Shukayev the director of international projects of NTUU " Igor Sikorsky Kyiv Polytechnic Institute "). Major part of the reports that were delivered during work in sections was devoted to the results of research conducted within the project in Ukraine. For example, there are three testing scenarios : "hot" and "cold" start; with the use of EGNOS and without it; with the reception of signals from different systems GNSS and receiving signals only from GPS. Scientists from NTUU " Igor Sikorsky Kyiv Polytechnic Institute " researched and determined on that three testing scenarios the optimum GNSS chipset for usage in a navigation device for monitoring of multimodal transport and also technical characteristics of a low-powered (passive) gas analyzers that are detecting a gas leaks during transportation of dangerous cargos.

Ekaterina Strelkova, Peter De Smet and Monica Pesshe have performanced at the final session of the conference. They have recognized the project as an extremely successful. Professor Sergei Shukayev the director of the National Contact Point of the EU "Horizon 2020" in Ukraine in field of "Information and Communication Technologies" said : “ The consortium will submit a new project for the contest on this subject, it will be announced this year in November.