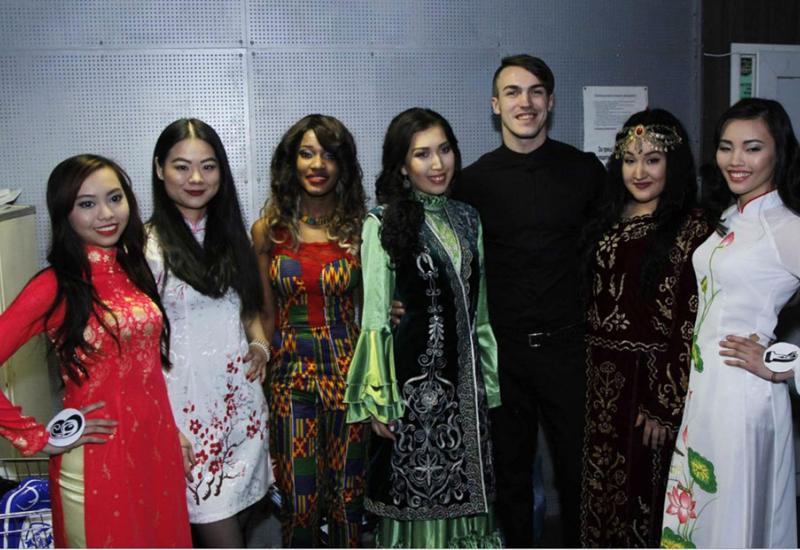 The competition International Miss KPI 2016 - the most anticipated event for all foreign students of our university was held on March, 31 in the center of consolidation of students "Intonation".

Six participants, representing China, Vietnam, Ghana, Kazakhstan and Turkey competed for the honorary title "International Miss of  KPI". This event was similar to International Mister of KPI and was made in the style of "The Great Gatsby" - smooth lines, loose silhouettes, beads, rhinestones and others. Each girl has chosen luxurious image in which she had to stride in front of the audience. Some tasks of the competition were to present their country and introduce it to the audience. Elegant Zionh Thi Thuy Oan and graceful Chiang Mai Fionh Uen are from Vietnam, charming Karhyn Merv acquainted us with Turkey, inflammatory Anuansah Rita Benuyva came from Ghana, Mirhul Sadykov familiarized us with unique culture of Kazakhstan and Nannan Zhang overmastered us with the beauty of China. One of the highlights of  International Miss KPI 2016 was a defile in traditional costumes. Then the girls made a nice surprise for the most active viewers and presented them souvenirs brought from their native countries. Girls showed their talents in various competitions. Somebody sang in the native language, someone showed unusual painting techniques, others attracted with hot dances and even with the reading of a poem in three languages. Guests were entertained by musical numbers of other foreign students.

The winner of the competition International Miss KPI 2016 has become a student of FE - inflammatory and chearful Anuansah Rita Benuyva (the third from left on photo), which overmastered not only the jury, but the audience and received the title of "Miss People's Choice." But the  title "Miss Internet" received elegant Zionh Thi Thuy Oan (pictured right) from FMM who represented Vietnam. All participants were awarded with gifts from sponsors. International Miss KPI has become the event, which was not so great as Queen of KPI, but the brightness and emotions of the audience even surpassed it.