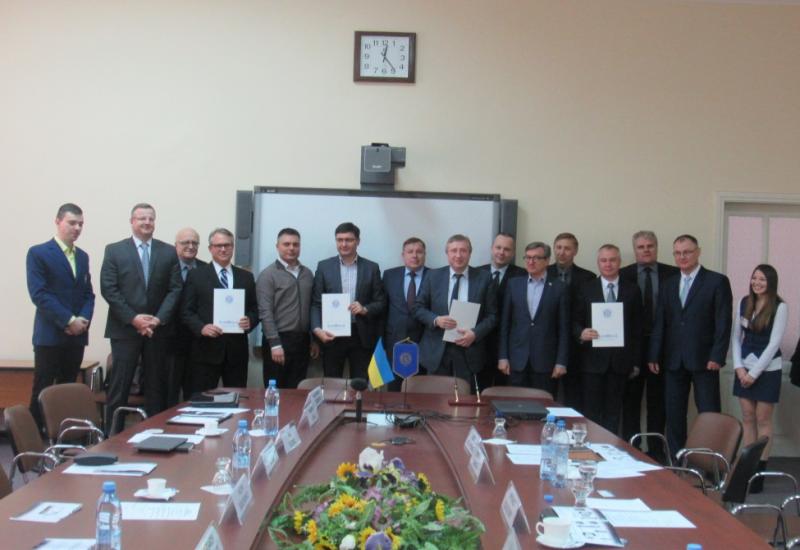 On 27, March in NTUU “KPI” there was round table session related to the “construction of demineralization drinking water plant in Mariupol”.

The manager of Donetsk regional state administration holding this position at the beginning of military actions and currently being parliament member of Ukraine on the part of Mariupol, Sergii Taruta, local chief of Mariupol city Vadym Boichenko, rector of NTUU “KPI”, academician of Ukrainian NAS Mykhailo Zgurovskyi, president of “Nature technologies” ltd Volodymyr Rysukhin, general manager of “RWL Water” (USA) Philip Laval, president of “RWL Water” affiliate branch in Israel Phil Elovic, representative of “Agency for renewal and development of Donbas region” Andrii Nikolaenko, vice-president of Scientific park “Kyiv polytechnics” Viktor Kamaiev, deputies of regional head of Mariupol city and managers of a number of structural subdivisions of executive body of local council of Mariupol city and others took part in the meeting.

It is worthy to note that the collaboration between «RWL Water» (USA), “Nature technologies” ltd and Scientific Park “Kyiv polytechnics” started last year. In September, 28, 2015 academician of Ukrainian NAS Mykhailo Zgurovskyi, general manager of «RWL Water» company Philip Laval, general director of the “Agency for renewal and development of Donbas region” Dmytro Tolstosheiev and president of “Nature technologies” company Volodymyr Rusukhin singed the memorandum on its conditions and directions. Thus, a new meeting that aimed at discussion of concept of water development in Mariupol city as well as the construction of demineralization plant is a clear illustration of the fact that the clauses of this document has become the foundation for particular work.

It stands to reason that a city for pilot project realization of this non-standard association of science and business is Mariupol. The water supply in this region is extremely relevant since the water in Mariupol city is supplied from Siverskyi-Donets channel – Donbas and Starokrymskyi water-storage reservoir. The channel was erected in 1958, so now it has a high deterioration level. Moreover, in the course of military actions in 2014, it was heavily damaged that led to water losses in water supply line leading to the city. In addition, the water supply line is 133 km long, so the water transportation requires extremely high level of energy consumption.

“We have an absolute consensus and common understanding towards this project, - noted one of the initiator of demineralization plant construction Sergii Taruta at the beginning of the round table. – It is very important for residents of Mariupol city”.

Demineralised plant construction plant for water supply in Mariupol city was presented to the participants of round table by the general director of «RWL Water» company, Philip Laval and president of “Nature technologies” company Volodymyr Rysukhin. The plant will be functioning on the water of Azov Sea with the power of 100 000 cubic meter per day with increasing power of 130 000 cubic meter per day. Water will undergo thee levels of purification: mechanical filtration, ultra filtration (extraction of high-molecular organics, suspended and colloidal particles, bacteria and viruses) and reversed osmosis (extraction of salts and moderation). Water purified in the result of such purification and demineralization methods will meet not only national but European sanitary standards as well. Herewith the water cost for consumers will not exceed set published tariffs. The construction plant cost will make up nearly 50 million dollars.

By the way, according to Volodymyr Rosukhin, reversed osmosis water purification technology is considered to be the most effective and it is increasing dramatically: increase of drinking water volumes, received with the help of such methods is up to 15 % annually. Similar enterprises operate in Singapore, Kuala Lumpur and other big cities.

One of important questions that were under discussion was the question of realization dates of the project. The answer was clear: it will be realized in terms of 18 months. Besides, the participants of the round table agreed on the fact that agreement of the documentation package between Mariupol city, “Nature technologies” company and «RWL Water» is due to start no later than April, 20.

In the end, Mykhailo Zgurovskyi informed participants of the round table that at present university scientists are working over Foresight of Donbas renewal. Thus, according to him, the clusters aimed at boosting development of economics of this region should cover the issues of water purification as well since the technologies being used at the demineralization plant in Mariupol city can be used for industrial and mine waters purification as well as that is extremely relevant for this region. And not only for this region since the problems of pure water supply are topical for many other regions of Ukraine.
In conclusion of round table meeting, its participants signed the protocol wherein agreements on further work and cooperation are stated.