The accident in Baikonur 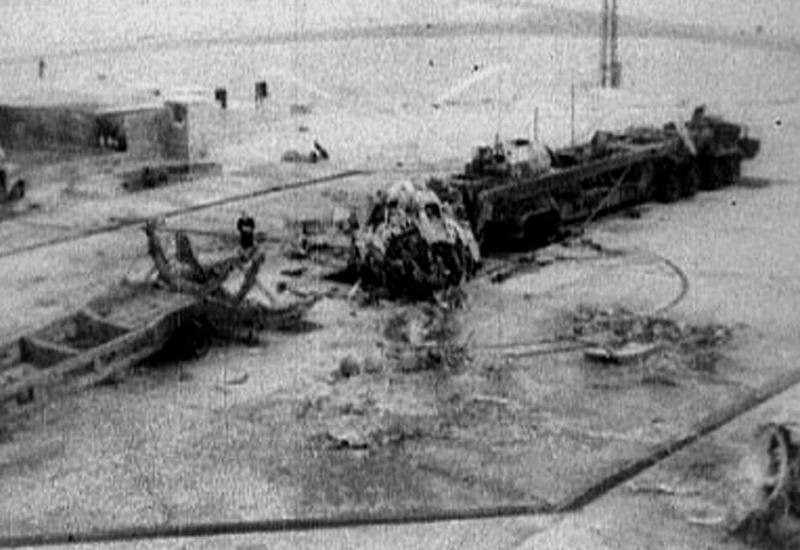 After finishing World War the Second the relations between USSR and USA are abruptly aggravated. From 1946 in the United States the nuclear plans were developed to attack USSR. In 1946 in Pentagon there was developed the plan “Pincers” which was expected to dump 50 aircraft nuclear bombs on 20 USSR towns. In 1948, in terms of "sizzle" has already been said about the use of 133 nuclear bombs on 70 Soviet cities. A year later, those numbers increased to 300 bombs and 200 cities. At the end of 1960, to have already armed with ballistic missiles, the Pentagon nuclear strike targets in 3423 in the USSR. Stationed in Britain, Turkey, Italy US missiles held at gunpoint entire European part of the USSR.

In such difficult circumstances the leadership of the Soviet Union defined the problem as soon as possible to create and deploy launches of intercontinental ballistic missiles (ICBM) that could affect the territory of the USSR strategic sites in the United States.

Intercontinental missile R-7A Korolev was complicated, expensive and easily impressionable starting system. Preparing to start it took more than 20 hours. We needed new ICBM with a high degree of readiness. These have become a missile R-16, developed in BC M.K.Yanhelya.

Flight tests first ICBM R-16 began in October 1960 at the site Baikonur by the Chairman of the State Commission M.I.Nedyelina Marshal and technical manager M.K.Yanhelya. The first missile was delivered to the assembly and testing building September 26, 1960 the morning until late at night military and civilian experts conducted tests, and at night under the supervision of factory workers performed revision. Every day Marshal M.I.Nedyelin personally reported on the preparations for the start-up of the head of state M.S.Hruschovu.

October 21, 1960 a rocket was taken to the start position pad 41. October 23, a rocket was refueled fuel components and compressed gases and started preparing it for launch, scheduled for 19.00.

October 23 at 18.00, according to the first technology schedule were to be undermined membrane first and second stages through the oxidizer as safe to fire on the component. Convinced of the tightness of the system could undermine membrane fuel line.

Doing received command responsible for engines waist got into the tail lights cover the first stage and began to listen, when will undermine membranes to confirm that the engine is ready to start. Their operation was supervised by ear, because testers did not have equipment, through which they could identify operation baromembrane, and in the tail compartment was dark. Since the first oxidizer has undermined the membrane of the second stage, attention has been directed upwards. Suddenly there was a sound in the rear compartment of the first degree, and a few seconds near the engine first stage there was a bright flash and the rear compartment was filled with the smell of burnt gunpowder. With portable lamp compartment experts inspected the tail of the first degree and found that instead of highway baromembrane second stage oxidizer worked baromembrane highway fuel first degree. And for sooty determined that there was unauthorized disruption squib valves cut off the gas generator of the first main engine block first degree. Announced hour delay start.

In the tucked position the missile R-16 would be 24 hours. Next, seal, seals, gaskets collapse could fuel components. If you cancel the launch, you need to drain the fuel to send a rocket to the factory, where engines are going through, so change all the seals. Preparing to launch a second missile lasted not less than one month.

At an emergency meeting of the committee proposed to replace the technical guide Pyrocartridges shut-off valves that worked, right at the start, without draining fuel components. The military agreed and moved the start at 19.00 on 24 October.

To continue preparing to launch rockets, it was necessary to clarify and eliminate the cause of undermining squib. And while experts at the hearing and smell operation baromembrane established fact, burnt Pyrocartridges locked electrical circuit that passed through the main distributor (GR) system of the first degree.

Late in the evening of October 23 found that the insulation of one of the strands was completely melted, and there was a short circuit. In this and the reason unauthorized operation squib shut-off valve of the gas generator of the first block of main engine first stage rocket. Dangerous operation of GH replacement management and clipping baromembrane gasifier was moved to 24 October.

The decision to replace GR management system of the rocket tucked undermined membranes was associated with greater risk. But the State Commission went on it.

On the morning of October 24 experts engaged in the removal of defects discovered before. In the afternoon, at the last meeting of the State Commission were heard reports of what violations sequences give commands, which led to inadvertent triggering membranes, was the result of design and manufacturing defects undermining panel developed OKB-692 (Kharkiv).

To prevent the occurrence of erroneous commands Commission adopted, as shown post emergency analysis fateful decision - a 30-minute readiness for launch make reinstallation stepper motors in the output management system (zero) state with a specially designed keypad. Commission members did not consider that the board has to be sealed battery on the hour readiness installed on the rocket and nominally connected. As a result, on-board tire pressure will be the second stage. Not included are and that all locks that prevent starting the engine of the second stage, were removed during previous operations.

About an hour before the accident were intruded separation baromembrane fuel tanks of the second degree. For reliability of this operation was carried out not by a defective remote undermining piromembrane and manually from separate power sources. It was checked and tightness lines connected ampoule battery.

At 18.45 the motion to its original state program current distributor issued the command to wear electro pneumatic valve pressurization tanks starting main engine of the second stage. The engine has started. The flames instantly burned through oxidizer tank first degree, then destroyed the fuel tank of the first degree, there was intense fire more than 120 tons of fuel components. Waves of flame spread with great speed, absorbing everything in its path.

The explosive burned out lasted no more than a minute and spread to dozens of meters from the start. Components of fuel that spilled from the tanks, poured testers that were underneath. People burned immediately. Those found at the sites of service, jumped right into the fire, trying to escape from the burning missiles.

A special machine with a rescue team immediately moved to the area, and rescuers began to assist flames people shoot down one fire extinguish clothing sand (nothing else was). Fire after burning fuel components continued for another two hours. Burn out everything that could burn - machines and installations, equipment and communication cables. Survived only engines first and second stages are made of special heat-resistant steels.

M.K.Yanhel a few minutes before the explosion went smoking room. Just lit a match as there was an explosion. Risking their lives, he rushed to save people from the fire of hell. Co-workers forcibly removed him from burns of hands from the start. But as soon bandaged hands, he returned to a blazing start.

It M.K. Yangel with bandaged hands, deeply traumatized sent a coded message to Moscow about the tragedy.

A few hours later flew to Baikonur members of the government commission headed by the Chairman of the Supreme Soviet of the USSR LI Brezhnev. During the night the hospital came to the site from Moscow, Leningrad, Rostov-on-Don. Victims provided first aid at the hospital at the site 10. All those who need skin grafts, was taken to the central military hospital named. Burdenko in Moscow.

Families of the victims were given the opportunity to choose his residence in any city in the Soviet Union to the provision of flats. For organizations moving families identified maintainers. By order of the Government, the families of the deceased at the time appointed good pension. All of the victims lying in the hospital, was given the opportunity to select the optional job or service in any city in the country.

Exactly three years later, on October 24, 1963, there was a another tragedy. After comprehensive tests Korolev Rocket R-9A in the mine launcher on the court 70 because of the large concentration of oxygen fire. Killed seven militaries and one civilian expert.

After the accident at the Baikonur work on rocket and space technology is not conducted on October 24. On this day, residents come Soldier with flowers in the park to mass graves to commemorate the victims of rocket.

'30 Disaster at Baikonur were classified. The first publication of which appeared in 1990 in the newspaper "Krasnaya zvezda" ( "It happened at Baikonur") and "Evening Dnepr" ( "They were the first").

I arrived at Baikonur for duty in early July 1964, and the first thing he saw in Soldiers Park - two mass graves, the victims missile 10.24.1960. And 10.24.1963 was. I was struck by the death toll since the war was not. My classmate Vadim Nicolin, held military service in 1960 at the site of 43, told me about the accident and warned me to no man spoke. Over 20 years of service at the Baikonur we never miss the traditional ceremony of laying flowers to the monument. Especially as I began service at the mine launcher, where the tragedy occurred October 24, 1963

For the first time in Kiev widely talked about the tragedy in 2005, the year of the 45th anniversary of the disaster. By decision of the Kiev office of veterans of Baikonur, October 24, 2005 at the Museum of Cosmonautics we gathered relatives of the victims, veterans of Baikonur Cosmodrome, Kapustin Yar, Plesetsk, and since then every year spend Memorial Day in the Museum of Astronautics.

And at Baikonur on October 24 every year is a funeral ceremony - first at mass graves in the Soldiers' Park, and then on the court 41 where the crash occurred. Flying time - now children and grandchildren come here to lay flowers and stand in silence over the grave of his parents and grandparents.