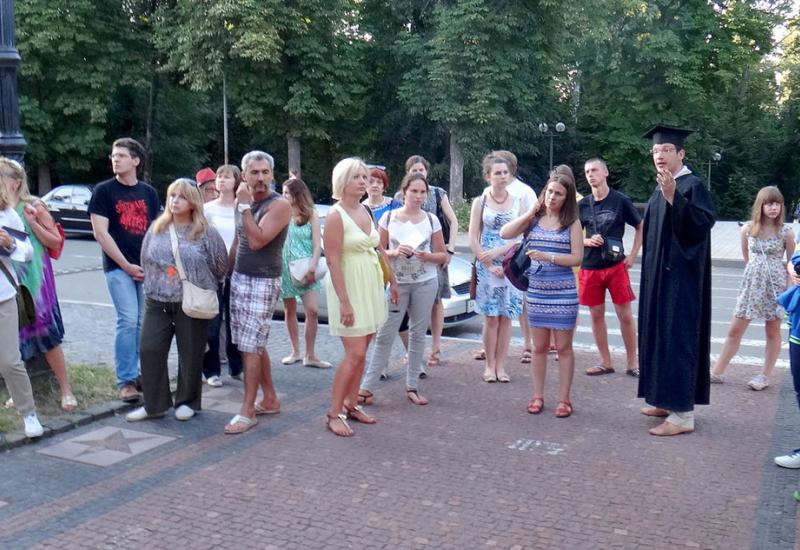 Several generations of polytechnics students and curious young people got gathered by an excursion through the territory of the KPI, which was organized by the enthusiasts of a famous Kyiv tourist company in July. The three-hour event, attended by one and all, was led by four tour guides, each leading their own stage of the tour. Particularly interesting were the facts and tales about the history and the present state of the university, famous scientists and their inventions, the architecture and flora of the KPI, prominent graduates acknowledged in many career fields. The walk was supported by a musical accompaniment, the guides were dressed in accordance with the era or themes of the story. The striking of the clock at the main building, the unexpected movement of the Foucault pendulum in the Scientific and Technical Library, the reverent silence of the Great Chemical Lecture Hall as a tribute to the well-known personalities who spoke here became the harmonious parts of the program.

Tourists not only marveled at the yet unknown stories, but also participated in the mini-quest, marking the answers in their "mark books" that they received in advance. Even some passers-by joined the game of guessing monuments at the KPI Alley of Glory by looking at the photographs of their fragments. Contestants there were trying to defend their answers rather lively and excitedly. At the sport core, contestants had to remember and perform some simple gymnastic exercises and other similar tasks. The trip customary ended at the main building: participants jointly launched colored air balloons into the sky in honor of the Republic of KPI, a country of wisdom, dreams and hope, which gave the tuition to thousands of its students and is now the leader of technical education in Ukraine.

For the record, the "Republic of KPI" excursion is the only one developed with the university in mind. Organizers promised to make it even more interesting and to pleasantly surprise us with their latest ideas: a guided tour for children and a night at the KPI Museum. Hopefully, they will be as interesting for the current, former and, most importantly, future students of the KPI.