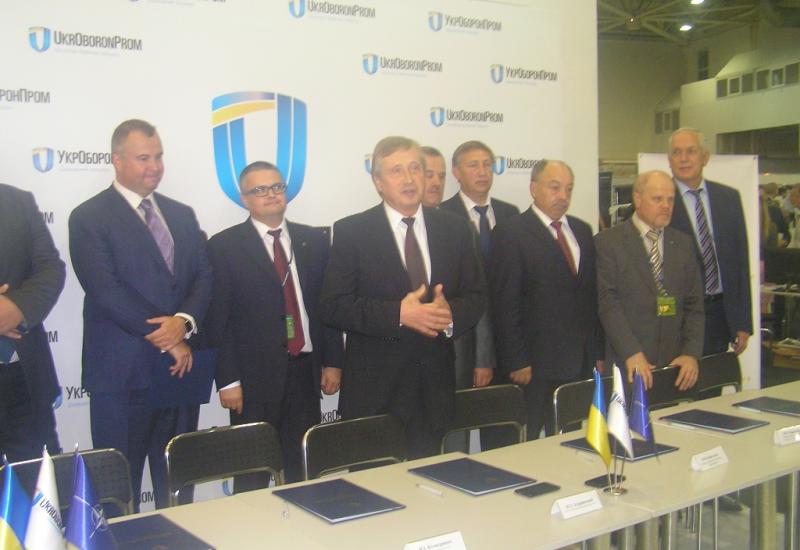 On September 24th, the General agreement on creation of Innovation-production platform - new for Ukraine model of union of scientific and innovation organizations and industrial enterprises, was signed in Kyiv.

The initiative to create it belongs to the National Technical University of Ukraine ‘Kyiv Polytechnic Institute’, State Concern ‘Ukroboronprom’ and State space agency of Ukraine.

The goal of the platform is to intensify the developments, production and implementation of scientific, competitive and highly technological production of first and foremost military and double-purpose.

The signing ceremony took place in the exhibition hall of ХІІ International specialized exhibition ‘Weapons and safety’ that is being held these days in the International Exhibition Center on Brovary Avenue in Kyiv.

The place of the agreement signing on the formation of new union was chosen for a reason: the exhibition that could be understand from the name is the base where foreign and Ukrainian companies and scientific institutions demonstrate their potential in the sphere of development and production of weapons, military and satellite equipment. SC ‘Ukroboronprom’ presented the biggest range of products that account the majority of Ukrainian weapons and military equipment manufacturers. Not far from the stand, the military exhibits engineered by KPI specialists were presented. The exhibits were listed in the state military contracts and started to be produced at the Concern.

‘That’s the first time in the history of Ukraine that the model of scientific, innovative and production union that should provide development and fulfillment of new, progressive projects and manufacture of modern production that is badly necessary for Ukraine is organized in one cycle’ – stressed Mykhailo Zhurovskyi, the rector of NTUU ‘KPI’, academician of NAS of Ukraine, while opening the ceremony of agreement signing ceremony. ‘We’re grateful to our old partners – ‘Ukroboronprom’, enterprises that are the part of the Concern and the State space agency of Ukraine. Long years of collaboration have been linking us. We’re also grateful to the Security Council for their support. However, cross-department barriers disturbed us up to this moment. Due to the creation of the union the barriers would be substantially decreased… We hope that the new model of cooperation will provide the further breakthrough in the state economy and safety as well.’

Roman Romanov, the general manager of the State Concern ‘Ukroboronprom’, was talking about the importance of direct connection between the science, education and the real sector of national economy. He highlighted that the agreement brings the collaboration between the science and production to the new level. It will allow transfer of a new product designed by Ukrainian researchers to the production as fast as possible. It is of the priority importance in the conditions of war that our country is struggling with on a daily basis. ‘We’re talking not only about the projects, products, we’re talking about the creation of goods that can protect the lives and health of our soldiers, officers in the anti-terroristic zone,’ he added.

Thus, the rector of NTUU ‘KPI’, Mykhailo Zhurovskyi signed the agreement from the university side and from the Stare Concern ‘Ukroboronprom’ and the State space agency of Ukraine - directors of governmental enterprise of special machine engineering ‘Arsenal’, ‘Elmiz’ plc., ‘Mayak Zavod’ plc, state enterprise ‘Kyiv state science and research institute of hydro devices ’, ‘Meridian named after S.P. Korolev’ plc., ‘NVO Kyiv Plant of automatics named after G.I. Petrovskyi’, state enterprise ‘VO Kyivprylad’. Besides, the National Part ‘Kyivska Politekhnika’ also joined the platform. On signing the agreement the document was confirmed by Roman Romanov, the general director of SC ‘Ukroboronprom’ and Oleksandr Golub, associate of the head of the State space agency of Ukraine.

After the ceremony the organizers answered the questions from the journalists. There was the question concerned with the opportunities to expand the composition of participants of the union. Mykhailo Zhurovskyi answered it. According to his words, the new platform is open for other enterprises and scientific organizations that are interested in creation of innovative production for military and safety purposes as well as double-purpose products.