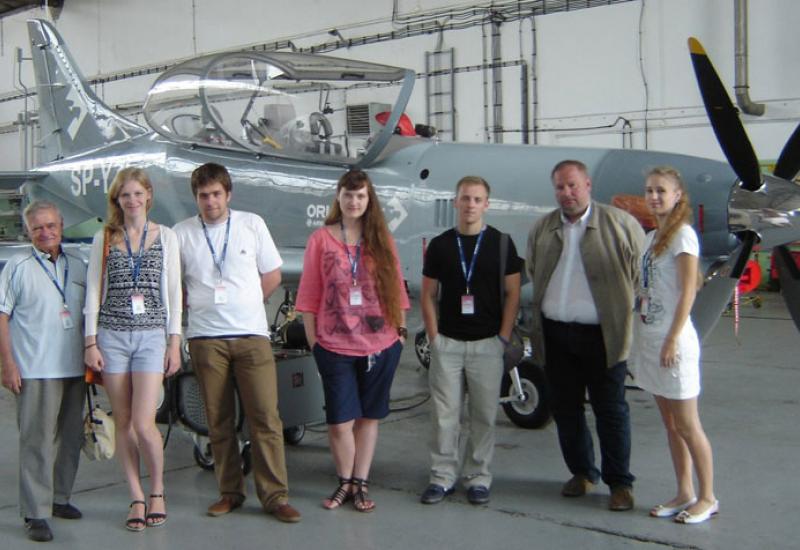 In July 2014 FASS best students, selected by indexes rating, in cooperation with the Faculty mechanic, energy and aviation Warsaw University of Technology (Warsaw Polytechnics) were on study industrial practices in Poland. It took place in several cities.

First stop in Poland was in a city of Przemysl. We were met by the student of Warsaw University of Technology Maciej Pyaskovski. With him we walked through all the town. First impression: the Poles are kind and friendly people. There are many churches and the castle of the XIV century. We made a tour there, climbed the tower and got down to the dungeon.

The first point of our program was the Gliding Centre of Rzeszow Polytechnic University and the Warsaw Polytechnic. We were warmly greeted by representatives of the Warsaw University of Technology:  Professor  R.Shvydkevych, chief organizer of  practical training V.Fronchek and local student interns. After relaxing and exploring the mountain slopes we started training together with the students of Warsaw University of Technology, attended lectures on design gliders, conducted research and calculations. At the end of practice we were allowed to fly with an instructor Bocian glider and feel all the appeal of flight.

We had only one evening to know more about the city. Walking around the central area of the city, found ourselves in one of jazz festivals that take place in many European cities. The show program "Dancing Fountains" will be remembered for a long. Also we noticed the monument revolutionaries set in the city center by the local communists. It stands as a monument of history, no one destroys it.

First we visited the Museum of Aviation. There are a lot of stands, which tells of the origin of the lifting force, given the notion of viscosity and others. Many types of aircraft are presented there. To quickly get around the whole museum, it took about 5 hours. A separate room is dedicated to aircraft engines. We liked the exposition of the aircraft  TS-11 Iskra. This description "for each cog" could be hardly found in modern sources of information.

Also, we surveyed the city, which locals call "Capital royal city of Krakow." Its architecture is fascinating; it has many historical monuments and is one of the largest scientific and economic centers in Poland.

We accompanied by the coordinator of cooperation between our faculty and faculty of mechanics, energy and aviation Warsaw University of Technology Professor V.Lutsyanek and Technical Director, Master of Engineering P.Chebulok. There were excursions to the enterprises  and to the Warsaw Polytechnic.

Institute of Aviation. The Research Specialist T.Zhbyhnevych was the organizer of the tour at the Institute of Aviation. The Institute is located in one of the airport in Warsaw. There are a lot of wind tunnels, subsonic and supersonic, large and small; training center for staff, where technicians are trained to repair and service engines in real samples. We visited the department which deals with test chassis for strength and resources, and were familiar with the process of testing.

Warsaw University of Technology. We were impressed by the main building, built in 1899-1901 years by the architect S.Shyller. The courtyard of the four-arched galleries covered with a glass roof. On the territory of the building there is a monument of Maria Sklodowska-Curie.

The faculty of mechanics, energy and aviation, we visited the laboratory with several wind tunnel for purging various models. Laboratories are equipped with diagnostic devices for aerodynamic research. We looked into the hangar where gliders are developed, visited the oldest audience-amphitheater. In one of the laboratories practical classes in a helicopter simulator are conducted. After completing instructing each of us had a chance to "fly". Emotions overwhelmed us.

Walking Warsaw. We visited the Copernicus Science Centre, where all the experiments one can see and make them by ourselves. We guessed the puzzles,  marveled natural phenomena, visited the planetarium. Through the work of Japanese robot Kawasaki each painted his own portrait. The Museum of Technology presented a large exhibition of models of equipment: bicycles, cars, clock mechanisms, music boxes, typewriters, the first aircraft, radios, phones, cameras, home appliances, firearms, artificial satellites, rockets, and other early computers.

We have walked the city, visited the park, located on the roof of the library of Warsaw University of Technology, Vilyanov park and palace Vilyanuvskyy, Lazienki Park and Palace Lazenkovsky. We admired monument of famous Polish composer Chopin. After Rzeszow show program with fountains we could not miss such a show in Warsaw. The fountain was moving to the music, and in water showed scattered 3D animation. When viewing performances start thinking, and how does it work? And in general, all seen is pushing to further productive work.