Publishing the first T.Shevchenko’ “Kobzar” collection was published on 18th of April, was the memorable event not only in ukrainian literature history but in the Ukrainian people consciousness history too. Instantly the collection emergence its poetic works appear and on pages of literary and art almanacs and collections, strengthening that great impression which made on the "Kobzar" Ukrainian society.

Almanacs are acyclic collections the broad sense, the ordered parts on a certain subject, genre or a style sign are start playing more and more a constructive role in formation of public consciousness during new Ukrainian literature formation . Structurally almanacs contained works of different authors, at first poetry, stories, sketches, and subsequently and articles of scientific, publicist and literary critical character. Such almanacs represented separate issues of the magazines published at a time, annually or from time to time. Their emergence and wide circulation in the Ukrainian literature were caused by almost total absence of periodicals. Some of them on popularity to Stew and extent of distribution to certain periods advance newspapers and magazines, are on leading positions both in journalistic, and in literary process.

It "The Ukrainian almanac" which is the first such collection and was published in 1831 Ismail Sreznevsky and Ivan Rozkovshenko in Kharkiv, "The Ukrainian collection" (book 1 - 2, 1838-1841), based also Ismail Sreznevsky, the "Mermaid Dnestrovaya", published 1837 in Budapest by participants of "The Russian Trinity" Markiyan Shashkevich, Ivan Vagilevich, Yakov Golovatsky, "Sheaf", is published by Alexander Korsun's diligence in Kharkiv 1841 etc. 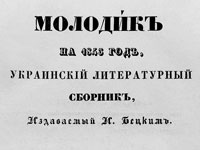 Those Ukrainian almanacs containing Taras Shevchenko’s works were extremely noticeable and draw considerable attention of literary critics , were published with his support. Their emergence were no system character, and it was generally caused ​​ by subjective factors, an initiative and certain cultural figuresenergy. During the author lifetime of his work left in almanacs "Swallow", "New moon", "House".

“Swallow” is one of the most interesting almanac in the first half of XIX cent. It creating history belongs to Gregory Kvitka-Osnovyanenko. It was ordered by Evgen Grebinka. In the beginning collected materials were planned as the annex to the Domestic Notes magazine. However initial intentions of the Ukrainian figures weren't fated to be carried out. Instead of planned, but the forbidden regular Ukrainian annexes to this magazine they managed to issue in St. Petersburg the almanac "Swallow"(1841). Work on its preparation began in 1838. Taras Shevchenko who then gave the first works to Evgen Grebinka for the publication in the almanac participated in editing of the almanac also. Not enough what modern press organ made such success at readers.

In “Swallow” his new five works were published: “Hysterical”( The mighty Dnieper roars and bellows..) "Kotlyarevsky's eternal memory" ​​ ("The sun heats, the wind blows... ")"Flowing water in the sea" (mistakenly - as elegy continuation to "Kotlyarevsky's eternal memory" ​​), "a wind violent" ("a wind violent, a wind violent") flows and undressed from the poem "Gaydamaki" ("Yarema! Gersh-tu! Boors son! "), entered the final text under "Galayd's" heading. Taras Shevchenko gave to the almanac and a fragment from the poem "Taras' Night", removed by censorship. Emergence of these works in the almanac and year earlier in "Kobzar" objectively laid the foundation of a new era in the history of the Ukrainian literature, showed he poet arrival to its ranks of big talent.

Evgen Grebinka, thanks to whom there was Taras Shevchenko's acquaintance to the Ukrainian poetry and discovering that it maybe Ukrainian the hand-written and printing word, in the note to placed in the almanac of the section "Gaydamaky expressed admiration of its new works: "pleased us last year with Shevchenko's" Kobzar", and now stillthe poem "Gaydamaky" were written. good piece, very beautiful, such tasty supposedly in hot day after a dinner a good water-melon! also you eat, and still wish, you eat, and still wish - both you read, and you won't come off".

In total in "Swallow" the best literary forces were recruited. In it it was placed fragments from Ivan Kotlyarevsky's play "Russian wizard", Grigory Kvitki-Osnovyanenko's story "Poor Oksana", a fragment from Panteleymon Kulish's fairy tale of "Gipsy", Petro Pisarevsky's fairy tale "A dog and the thief", Lev Borovikovsky's fables "the doctor and health" ("Time the doctor to the city set of... ") ", the uncle and the aunt" ("My uncle sometimes will beat me and will scold... ) ", "The Russian and Motrya" ("The Russian stole goose in Motrya ... "), Victor Zabila's lyrical verses "blew softly winds violent", Evgenia Grebinka's"The Ukrainian melody" ("Isn't present, mother, love can't be ordered... "), Aleksandr Afanasev-Chuzhbinsky "Farewell" ("Farewell, cheerful party! ") and etc., poetic processings of national riddles, a selection of the national songs collected by Stepan Pisarevsky, and also other models of national creativity.

As the “Swallow” almanac, the Ukrainian literary and art and historical and scientific almanac "New moon" was the example of the best achievements of the Ukrainian literature, formation and development of critical thought round problems of further development of the Ukrainian literature, which was published by Ivan Betsky with Gregory Kvitki-Osnovyanenko's and Mylola Kostomarov's helps in 1843-1844. Three books were published in Kharkiv and one in St. Petersburg. Gregory Kvitka-Osnovyanenko in the letter on 22th of December , 1841 reported to Taras Shevchenko about almanac preparation under the name "New moon" and asked him to send some poems for future edition. The poet soon responded to the offer. . In "New moon" for 1843 (p.2) Taras Shevchenko's works were published: In "New moon" for 1843 (p.2) Taras Shevchenko's works were published: the ballad "Drowned woman" ("The wind doesn't walk in a grove... "), verses "Thought" ("It is heavy to live on light. . ")", to N. Markevich" (" Bandura player, the gray eagle ... "). Together with these verses he sent to "New moons" a fragment from the drama "Bride" - "The song guard in prisons" (then it wasn't published). These works took the central place in the almanac. For the period of its publication Taras Shevchenko already gained recognition as the author of "Kobzar", "Gaydamaki", the works placed in "Swallow". The poet talent was sung in Alexander Afanasyev-Chuzhbinsky's poem dedication "​​ Shevchenko" ("Well yours kobza plays... "), placed among other verses of the almanac. It is known that Taras Shevchenko became interested in the newspaper.

He received one " New moons" books from Stepan Burachek and in the letter between 29th and 31th of March , 1844 asked him other releases. Many Ukrainian writers works - Evgeny Grebenki's poetry "Wood" ("Who loves the girl, loves also the wood... ") ", the Song" ("Oh in the field on Rozdol... "), Mikhail Petrenko "evening" (" Having inclined on a hand, I look... ")", the Parental grave" (" He Abandoned us and our mother... "), Yakov Shchegolev "Bondage" (" Give me my horse... "), Gregory Kvitki-Osnovyanenko's stories "Tumbleweed", "Pidbrekhach", Nikolay Kostomarov's fairy tales "Feed bag", "Catch", the collection "National Songs", historical and historico-literary materials also were published in the almanac.

The literary and art almanac "House" was published in St. Petersburg in 1860. Overcoming considerable acceptable obstacles, Panteleymon Kulish managed to ipublish the magazine. Taras Shevchenko took the most active participation in the almanac organizations . Having returned from exile, it completely plunges into whirlpool of literary and public life. The paramount place in "House " is taken by the section "Kobzar's Gift".In it for the first time a selection of of Taras Shevchenko's verses were published under editorial names: " A guilder-rose ("That you go on a grave? ") ", Emptiness" ("Early in the morning recruits") ", For Christmas" ("Not home going at night. . ")", the Kozak destiny" (" Why to me to marry? ")", To Ukraine" (" Isn't present worse as in bondage... ")", the Hut" (" I didn't pray for me... ") ", to a star. (From the poem)" (the introduction to the poem "Princess") ", the Song" ("Oh on the mountain the novel blossoms... "), under author's names - "Scarf" ("that on that God's will... ")", Destiny" (" You didn't dissemble with me... "). The main subject of these works were painful experiences of loneliness, grief, separation, death. On 17th of January 1859 Taras Shevchenko invited Yakov Kukharenko to take part in "House " in the letter and already on 25th of March , 1860 he sent to him an almanac copy.

These publications, as well as those that were published later, after Taras Shevchenko's death("Moon", 1881), contributed to the creative forces consolidation of Ukrainian writers, determined style trends literature, summarized its achievements, outline future. They contain not only material of this literary process of folk art, but also historical documents that were the basis for further studies of literary criticism and research work of different writers of the outstanding achievements. They became the evidence of the Ukrainian literature development and progress. Almanacs popularity largely contributed Taras Shevchenko's works which contained to it .He had to play a prominent role in the history of Ukrainian literature.