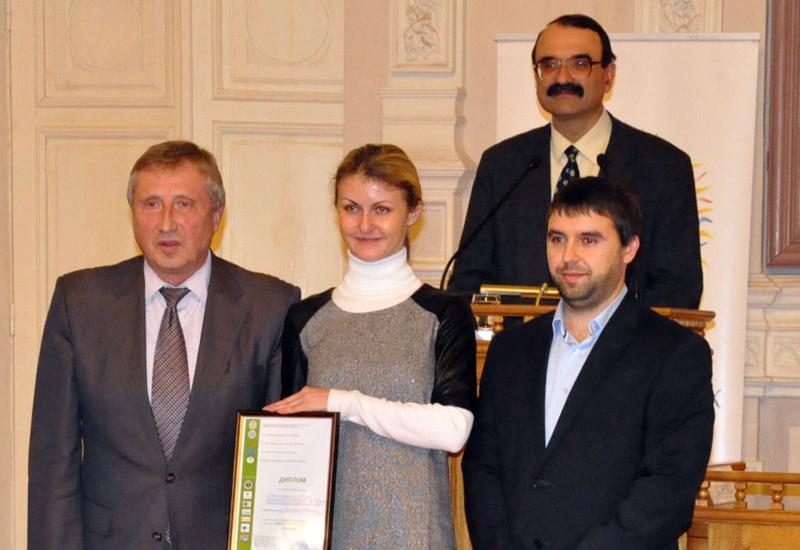 On October, 17 in the Hall of the Academic Council of NTUU "KPI" the results were drawn up, the winners were awarded and closing ceremony of the Second All-Ukrainian festival of innovation projects "Sikorsky Challenge 2013" was presided .

However, before everything was summarized, 15 projects were presented and they were included in the "short list" of the festival, which means they were selected by the Expert Committee to participate in the finals and, in case of winning , they would get funds for the development of start-ups for the purpose of its further implementation.

The festival was traditionally held under the patronage of Leonid Kuchma's President's Fund "Ukraine" in collaboration with the Independent Association of Ukrainian Banks, Ukrainian Science and Technology Center in Ukraine (STCU), the U.S. Embassy in Ukraine, the European Commission and innovative companies and funds of Ukraine, the European Union and the United States of America. Science Park "Kyiv Polytechnica" appeared to be its immediate organisator.

In the final part of the ceremonial events participated the following members: the deputy chairman of The State Agency on Science, Innovations and Informatization of Ukraine, the chairman of the Supervisory Board of the Science Park "Kyiv Polytechnica" Viktor Ivchenko, executive supervisor of the Independent Bankers Association of Ukraine Sergey Mamedov, vice president of the Higher School of Ukrainian Academy of Sciences Maxim Strikha (chairman of the International jury of the festival), president of the Youth Academy of Sciences, Corresponding Member of NAS of Ukraine Stanislav Dovhyi, director of the Institute for Strategic assessments affiliated with Leonid Kuchma's Presidential Fund "Ukraine" Pavlo Haidutsky, executive director of the Ukrainian Scientific-Technological Center (the USA) Michael Aynik, representatives of innovation funds and organizations in the USA, Russia, Kazakhstan, Belarus and Ukraine, scientists, teachers and graduate students from NTUU "KPI" and others.

It is the second time when «Sikorsky Challenge» was held in NTUU "KPI", and had its preparatory stage - presentation of projects for participation in the competition, which began on April,15 and continues till the end of August, showed that it has become one of the biggest annual events in the country in the field of technical assistance to innovative activity.

"There are different approaches to the role of universities in education and research activities. At KPI we believe that ... the focal point of innovation activities is a big Technical University, which, to some extent, assumes the functions of large companies and creates the centers to develop new ideas that allow these companies successful competion on the market , - stated Rector of NTUU "KPI " Michael Zgurovsky at the opening of the final day of the festival, - The authorities provide political support to universities and promote cooperation between business and universities, as well as the University provides scientific, inventive, and educational components, and staffing support of various innovations in collaboration with certain hi-tech companies. The work of our Science Park "Kyiv Polytechnica" is based on this model and this festival is one of the places where all participants of this innovation process can meet together."

By the way, at this meeting the Venture Fund was presented, it is called «Sikorsky Challenge», same as the name of the whole festival, and will be able to provide investment and financial support for start-ups created based on the results of the competition. The Fund organization will be provided by the "National Reserve" company which is a partner of the Science Park. As for the finalists, they represent groups of NTUU "KPI", Institute of Mechanical Engineering named after A.N. Podgorny of NAS of Ukraine , Volyn Institute of Materials and Energy Conservation, Institute of Cybernetics named after V.M. Glushkov of NAS and SAS of Ukraine. An important criteria for the selection of projects was not only their innovative component (which is an obligatory requirement for participation in the festival!) – the preference was given to business-oriented projects - those that have scientific and practical value, that can be introduced into manufacture, applied in practice and provide an economic and social effect. That was about development aimed at solving problems that occur in our country. So the subject of works that reached the final dealt with fairly wide range of issues - from the development of new technologies in water purification and energy saving heating elements for general purposes to specialized medical devices and equipment.

And the winners of the All-Ukrainian festival of innovation projects «Sikorsky Challenge 2013 are: 1 place - the project "Intelligent Sensor technology for instant diagnosis of agricultural cultivation" (by Eugene Sarahan (Institute of Cybernetics named after V.M. Hlushkov)

The team of contributors of three winning projects received from the Independent Association of Ukrainian banks the funds for financing the start-ups , i.e. for implementing their ideas in the environment of the Science Park "Kyiv Polytechnica" (first place – 80.000 hrn; 2 – 56.000 hrn; 3 -24.000 hrn).

For the Awards of Presidential Foundation of Leonid Kuchma “Ukraine” (8.000 hrn. each) the International jury recommended the projects "Television and radio multiservice access system «UMDS» (by Alexander Masurenko, NTUU "KPI"), "Self-fluxing alloys powder for spraying mixed- use (wear-resistant, corrosion-resistant, renewable etc.) thermal methods and equipment for their production" (author Anatolii Stepanchuk , NTUU "KPI"), "Control of fatigue ferromagnetic materials by nondestructive magnetic method" (by Karen Vakulenko , Institute of Mechanical Engineering named after A.M.Pidhornyi of NAS of Ukraine ), "Adaptive turbine" (by Alexander Malyarko, SAS of Ukraine ) and "Device to protect downhole pump from"dry run" (by Mykola Krivoruchko, SAS of Ukraine). These prizes will be awarded to winners later – in a festive atmosphere in the building of Presidential Foundation of Leonid Kuchma "Ukraine".

During the meeting the International Jury thought of another prize for young researchers – the prize of International Fund for investment. It was awarded to the projects "Wheelchair - terrain vehicle" (by Timur Abbasov and Oleksiy Yama, SAN of Ukraine ), "New devices for obtaining carbon nanostructures by electrical method" (by Yaroslav Borovyi, SAS of Ukraine) and "Remote Monitoring of patients in rehabilitation period through the use of wireless technology sensor networks" (by Sergei Volvach, SAS of Ukraine). They were awarded with 5.000 hrn.

Congratulations to the winners!