Visit of the representatives of the educational sector of Kazakhstan 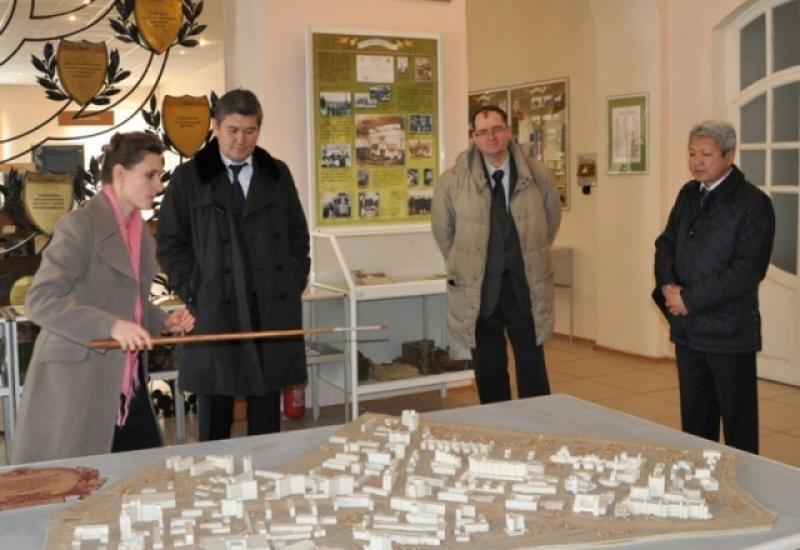 On April, 3 in the course of preparation for the official visit of Prime Minister of the Republic of Kazakhstan Serik Akhmetov to Ukraine NTUU "KPI" was visited by the Vice Minister of Education and Science of Kazakhstan Sayat Shayahmetova and vice-rector of Semipalatinsk State Pedagogical Institute Abzal Taltenov .

Opening the meeting, Sergei Sidorenko said that enterprises and research organizations of the Republic of Kazakhstan are among the key partners of NTUU "KPI " and that relationships with them are based on the tradition which was built for decades , and today it is the development of new impulses .

In his turn Sayat Shayahmetova noticed that one of the principles on which the concept of modernization of the education system of the Republic of Kazakhstan, is to maintain and develop relationships with academic institutions of the CIS countries and the former Soviet Union and Ukraine in their number is high . At the same time, he said , the state policy of the Republic of Kazakhstan was aimed at creating a national model of education , integrated into the global educational community and able to provide the highest standards of training. Today, universities are the main subject of scientific activity. The country introduced a three-tier system of professional training - Bachelor - Master - Doctorate (PhD), established a national system of education quality evaluation . A number of measures to strengthen and increase the prestige of scientific and educational activities, allowing for a significant increase in the percentage of doctors (PhD), who after the thesis defense are working in higher education. Now it is 95 %, whereas a few years ago barely reached 20%. Today leadership of Kazakhstan pays great attention to the development of national science. Evidence of this is the fact that over the last two years of funding field , according to Sayat Shayahmetova increased threefold. And in 2011 in the Republic of Kazakhstan adopted a new law on science, which regulates the issue of competence of public authorities in the field of scientific and technological activities, the order of these activities and defined the fundamental principles of management and financing .

Discussion of Development and Financing of Education in both countries has caused great interest of the audience. The Vice-Rector Michael Il'chenko told the guests about the new draft Law of Ukraine on higher education and the basic ideas laid they their developers. Have been raised about the problem of financing science and relevance of research results, particularly those that are applied in nature , from the state. One way to overcome the difficulty is to work on the orders of domestic and foreign enterprises and businesses interested in innovative products. In this context, a very interesting experience Science Park "Kyiv Polytechnic" , which described in detail his guests CEO Victor Kamayev and its Director of International Andrei Shisholin . Such projects implemented by specialists Chemical Engineering Department to order and together with partners from Kazakhstan informed his guests Dean Igor Astrelin .

After meeting the representatives of the University of the Republic of Kazakhstan visited the State Polytechnic Museum of NTUU "KPI", Cultural Arts Center and the research library of the university.