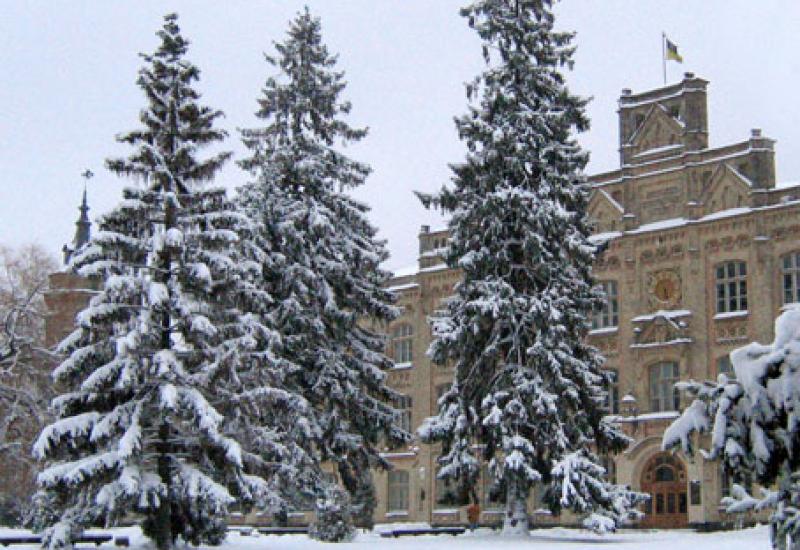 For many years, on the front page of the New Year issue of our newspaper next to the Rector's congratulation it is published the winter photo of the first building, made in a week or a month before the release. Photos are not repeated - pictures are taken from different angles at different times of day. But they have to include the first building and one or more fir-trees growing in front of it.

It's clear why: New Year's holiday requires a certain symbolism, and first building of old architecture with huge fir trees growing in front of it, has long been a symbol of the KPI. In addition, in the winter, when the trees are bare, when dominated by black and gray colors, images of green fir trees on a background of yellow bricks have a festive look.

Years go by, but the building and fir trees seem to be timeless. Today, they look almost the same as ten, twenty, or even seventy years ago - judging by the photos of main entrance to the building, made in 1938.

It may seem that they have always been. But it is not. Everything in the territory of our university - buildings, paths, trees, bushes, came here not by chance.

As you know, for the construction of the Kiev Polytechnic Institute the land was allotted, were previously there was a military training ground (demining field). There was no not only trees or shrubs, even the grass was not growing - sandy desert with pits and trenches. In addition, as recalled in 1913 the first rector of KPI V.L.Kirpichov during bookmarks KPI, which was held August 30, 1898, it was the heat, the wind carried clouds of sand and dust, which further enhances the similarity with the desert.

But construction began, academic buildings, workshops, homes were constructed, trees and shrubs were planted. Decades have passed, trees have grown, and today we can enjoy the summer coolness in the park.

It is interesting to trace through the old photographs, as the fir trees were growing in front of the first building. In December of 2008 our newspaper published a picture of a group of students on the background of the first building, dated June 22, 1903 It shows a small tree - up to the belt of the man. Photo of the First building in 1908, where fir trees have reached up to the second floor (see. Page. 4). On the photo 1938 the tops of the trees reached the windows of the third floor.

Then there was the Great Patriotic War. The invaders cut down trees in the park, but fir trees survived. KPI buildings were damaged, but after the war they were repaired.

And if today we can enjoy the beauty of the first building and its surroundings - it is only thanks to the work of many generations of Kyiv Polytechnics.

Say, and a bee is working. Maybe so. But the bee acts instinctively, without being aware of what it does. But the man in his work embodies his plan - the idea, the concept, the project. The first building is the way it is, because it was built by the architect I.S. Kitner. The relevant committee recognized the project as the best of all submitted to the contest. The Polytechnic Institute in Kiev itself is appeared because a group of enterprising residents put forward the idea of its creation, has repeatedly appealed to the state institutions, collected the funds.

And then the KPI grew, developed, built according to specific designs, for the execution of the relevant decisions of certain institutions and leaders. To perform some specific tasks certain departments were transformed into individual institutions, to perform other - new departments were created. The of new buildings, dormitories, and recreation centers were constructed.

In the early 70-ies of the last century, the country's leadership has decided to expand the KPI. Under the direction of architect V.I.Lihovodov it was created promising Master Plan KPI, according to which in 70-80th there were built more than 20 objects, including educational and laboratory buildings, Scientific and Technical Library, Cultural Arts Center, Sports Complex, dormitories №№18-20.

In recent years, the KPI also changes - on a smaller scale, but noticeable. And it's not only the construction of new buildings and new equipment, but also the new face of the KPI. This is a pedestrian zone in the street Polytechnique, and reconstruction of the park, and construction of the historic part of the campus KPI and State Polytechnic Museum at the NTUU "KPI", which was opened in 1998, and an art gallery. Modern students are perhaps hard to imagine that the current Museum Square and the alley where there are monuments, thirty years ago there was a kind of "backyard" KPI, through which it was necessary to quickly run across on business. The desire to walk there did not appear.Today, a visit to the alley and the museum is an indispensable component of the program to receive all the honored guests of the University.

I do not know if all the polytechnics are aware that the visible changes in recent years that occur in our university - is the realization of ideas of the current leadership headed by M.Z.Zgurovsky. From time to time it can be hear the words that for someone may seem as a stamp "conversion KPI university on European model." But if you look around, the meaning of these words becomes clear.

And you cannot say that the KPI changes only in appearance. Introduction appraisals, surveys of employers, monitoring the quality of knowledge, the program "The future of Ukraine," Science Park "Kyiv Polytechnic", numerous centers of world-renowned companies in the field of high technology, Ukrainian, Japanese and other international centers KPI - only the last 10 years much has been done in order to improve education and create conditions for the development of science in our university.

I do not know as well, are all aware of how important was the role of the Rector in the change of our university? Will Park KPI with more than a century of history exist or in its place a shopping and entertainment complex will be built? If in the place of Glade the high-rise building will be built? The answers of the rector are known. And what are the answers given to someone else? And in general, in the present circumstances, when science and education in our country are not priorities through a variety of objective and subjective reasons, change for the better in our university is very heavily dependent on the personal qualities of the rector, on his vision of the future and purpose of the KPI.

Two years ago, between the old fir trees before the first building very young trees were planted. When you see them, and remember that fir trees live to two hundred years, you know – these fir trees will be there in future. And the fact that they were planted - the result of the decision of those who thought about the distant future KPI.

The last four months I often think the question: whose decision the collective of the University will implement the new year and in the next few years? It this decision will not be those who are not accustomed to think about the future or the fate of many thousands of employees?