Harbinger of our will. History of the anthem “Ukraine has not perished” 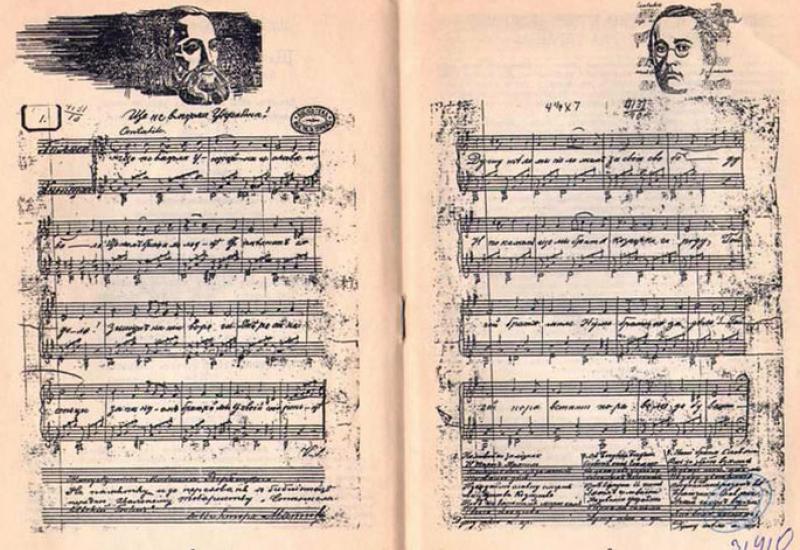 The national anthem belongs to the biggest shrines of any nation. It is highest expression of its freedom loving, spiritual and patriotic aspirations. The words and music of the anthem make us to stand up at the first its chord. For the Ukrainians this is the anthem “Ukraine has not perished”.

The first music symbolic of our people goes back to the Kiev Rus times. Then the anthem role – in our today understanding - was played by combat calls and songs, which made the patriotic mood before the battle. According to “The Lay of Igor”, songs appealed to the soldiers’ courage, to get the glory, to revenge the enemy for the Russian land, for the wounds. Before the decisive battle on the river Kalka 1223 against Tatar-Mongols Russian squads sang “The God with us, understand it, pagans”. Before the Grunewald battle 1410, between the Teutonic army from one side and united Poland-Lithuanian-Ukrainian army from another, there was as a anthem the song “Bohorodzitsa Dzyevitsa."

At the Cossacks times it was very popular the song “Hey, guys, to arms”:
Oh, were gathered to rescue the seagull,
To get the glory.
Oh, master, or lost, nobody dies twice,
Hey, guys, to arm!

Later the patriotic songs, such as “Song about Baida”, “Oh, on the hill the reapers reap”, ”Early Cossacks woke up” were broadly spread.

Having lost its statehood, Ukraine during several centuries did not have its own anthem. It was replaced by some patriotic songs, often the religious ones, which however did not cover the fate of all people.

The French revolution in February 1848 immediately stirred up Europe and was responded very quickly in Austria-Hungary. The move of Ukrainians in Galicia to secede had accelerated. May 2, 1848, in Lviv it was founded The Main Ruska Rada, which adopted as the national anthem the song on the verses of Ivan Gutalevich father “Peace to you, brothers”.

We give you peace, brothers,
Peace - this is sign of our fathers,
Asks the sky for the peace all day long,
Whether rich or needy.

At the same time in Transcarpathia Olexander Duhnevich wrote the anthem “I am and will be rusin”:

I am and will be rusin,
My honest family I will not forget,
My father and mother were rusins too,
All my family was rusin.

Duhnevich is the author of the verses “Podcarpathian rusins”, which became the official anthem of the territory up to 1939.

“Testament” Shevchenko, “Eternal revolutionary” Franko, “God is great, the only save Ukraine” of Kosinsky, all of them were kind of anthem. However they did not have such great and tragic fame as “Ukraine has not perished”.

In the early 60-ies of the XIX century. among patriotic Kyiv "Old Society", which included such prominent figures as Thaddeus Rylsky, Volodymyr Antonovich, Alexander Rusov, Pavlo Chubynsky and others, the idea arose to create highly patriotic poem that inspired the Ukrainian to the struggle for freedom, has become a national anthem. The famous Ukrainian poet, ethnographer, folklorist, member of the Russian Geographical Society (1873), winner of the gold medal of the International Geographical Congress in Paris in 1875 and Uvarov Award Petersburg Academy of Sciences in 1879 Pavlo Chubynsky has succeeded in implementing this plan.

Life and scientific career of the author “Ukraine has not perished” was difficult ant thorny. Pavlo Platonovich Chubynsky was born January 27, 1839, in Borispol, near Kyiv. In 1861 he got law degree in Petersburg.

There is no exact date of verse writing, but according some sources it may be 1862 year. The poem of Chubynsky started its illegal existence in Tsarist Russia as a political-patriotic poem, as well as a song. In 1863, the poem thanks to the participant of the Polish revolt Pavlin Sventsitsky illegally got to Galicia and was published in Lviv journal “Meta” №4. The poem text was differed from the others by its clear understanding of historical fame of Ukrainian people. Here we find the call to the fight, believe in immortality of Ukraine and national liberation and cultural rise, confidence in immensity of talented people, hope for a brighter future.

The most important role was played by the music, written by the west Ukrainian composer and conductor, one of the organizers cultural and spiritual life in West Ukraine Michael Verbitsky (1815-1870). Musical arrangement was saturated by the peculiarities of Ukrainian songs, had a clear marching sound. All this in organic unity created unrivaled patriotism, by which the song deeply rooted in the minds of Ukrainians.

Ukraine has not perished, and fame, and freedom,
And to us, young brothers, fate will smile,
Our enemies will vanish like the dew on the sun,
And, brothers, we will rule in our own.

First time the people heard this poem, probably in 1864 in the context of “Comedy-opera” Karol Geinch in Lviv.

The newspaper “Slovo” informed, that the choir sang “Zaporozhye has not perished” on the music Verbitsky first time during the show. The song was liked by public, it had to be repeated. The fact, that the words of this song were written in the East, and the music – in the West, show the unity of Ukrainian people. Combining the words and the music, the song inspired generations of fighters for freedom of Ukraine.

Starting from 60s of XIX century the song “Ukraine has not perished” begun to extend from Carpathians to Siberia. It was first on the west of the Ukraine (Drogobych, Lviv, Peremyshl), later – on the Dnieper and in areas where Ukrainians lived (Canada, USA, Brasilia and others).

New impetus was given to the anthem at the time of Ukrainian People Republic and Transcarpathian Ukrainian People Republic. The words and the music of the anthem started to be published in many journals: in Lviv, Kiev, Viden, Berlin- in Ukrainian, English, German and other languages. It was played by many choirs and brass bands. Practically the song was used as an anthem of Ukrainian state. However, there was no any special decree, monopolizing the song as an anthem. The national status the song got only in March 15, 1939, as an official anthem of Carpathian Ukraine. However Carpathian Ukraine did not exist for a long, Hungarian occupational regime banned the anthem.

At the time the song was banned in Ukraine by Russian autocracy and, as a result, Pavlo Chubynsky had an “opportunity” to familiarize with Arkhangelsk province.

Later it was destroyed by Whites. In an autumn of 1919 Denikin’s soldiers have thrown in fire 60 copies of the poem, which was printed in 1917 by publishing house of Ukrainian Union.

However, the Bolshevik regime had a most hatred for the song. It was declared a bourgeois-nationalist, banned, severely persecuted. Its performance could be dangerous . The main reason for the ban was a text that did not give the people forget that they are Ukrainian, which Ukraine is not dead, we are of the Cossack.

In the late 80's - early 90-ies of the last century, the song began to gain wide publicity among Ukrainian. In July 1991, after a solemn meeting devoted to the first anniversary of the Declaration of State Sovereignty of Ukraine, in the Palace "Ukraine" there was a concert, and the final chord on it was the song "Ukraine has not perished." So after decades of silence, this work got almost official recognition.