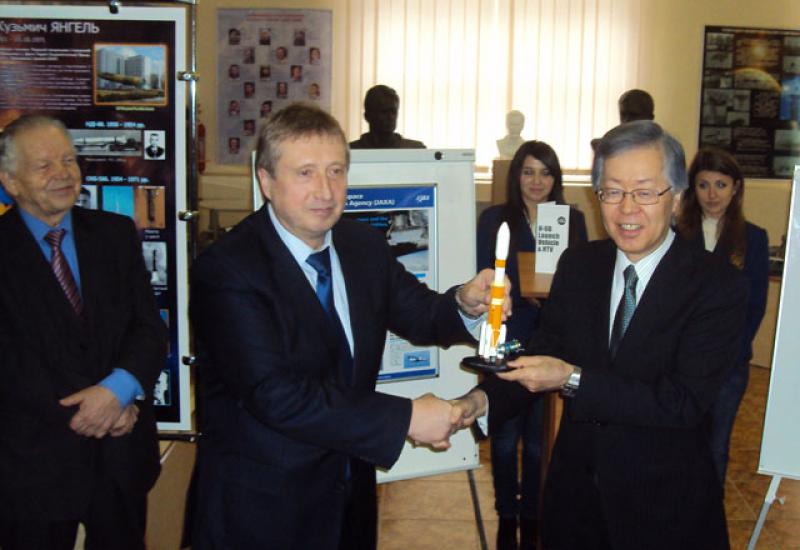 December 14 Ambassador of Japan Toichi Sakata donated to the State Polytechnic Museum at "KPI" Japanese model of space rocket "H-IIB". This spacecraft belongs to the third generation designed and built in Japanese carriers that is one of the most successful in recent years, with its twenty launches only one was unsuccessful. Model and plane-table with its description, characteristic and general information about the space program of Japan established in the Department of Aviation and Cosmonautics n.a. I.Sikorskoho. Nowadays they are available for public eye.

This gift is very valuable for the Department of Aviation and Cosmonautics at "KPI" the State Polytechnic Museum, because before this time there were no exhibits that have told about the Japanese space program. The program is extremely powerful. Today Japan is one of the few countries in the world that have their own satellites and their carriers that are able to deliver these satellites into orbit.

Japanese space exploration history extends back 40 years. The first twenty years of Japanese experts collaborated with specialists of the USA space industry and the recent two decades they develop their own programs and projects. In view of the technological development of the Countries of the Rising Sun, these projects are extremely interesting and also effective. As evidence a vast total number of successful launches of all types rocket - 86%! One may state that today Japan gives for other states the object lesson of how effectively use public funds for space exploration, because it spends on similar projects around ten times less than the budget of a leading American department of space exploration NASA. However, seven of its representatives visited the space. By the way, one of them – Takao Doi - in 1997, flew in a crew of the first astronaut of independent Ukraine Leonid Kadeniuk.

- I am honored to give over the KPI museum, which contains information about the history of space exploration and exhibits from around the world, this dummy rocket, created in Japan - said Toichi Sakata. - I hope that cooperation between "KPI" and Japanese organizations that working in the field of space research, will develop and become stronger. 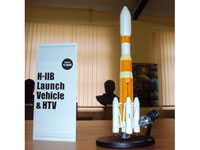 The ceremony of passing the dummy rocket preceded by extensive and interesting conversation in which, except of the Ambassador of Japan Toichi Sakata and representatives of the Embassy of Japan in Ukraine, also take part the rector of "KPI" NAS of Ukraine Mykhailo Zghurovskyi, director of Department of scientific and licensing of the Ministry of Education, Youth and Sports of Ukraine Oleksandr Yakimenko, head of International Cooperation Department of the same Ministry Andrii Bozhkov, director of the Far East Fourth Territorial Department of the Ministry of Foreign Affairs of Ukraine Valerii Aleksandruk, rector of "KPI" Serhii Sydorenko, representatives of the Ukrainian-Japanese Center "KPI" and research and teaching departments of the university.

- We appreciate the friendly ties with your country, - said Mykhailo Zghurovskyi, opening the meeting with Japanese guests, - We have much in common: of course, first of all, is a nuclear tragedy that our people endured, and huge efforts to overcome their consequences. Therefore, we understand the need for mutual support to survival and development. Our scientific cooperation, which is actively realized through the Ukrainian-Japanese Center at "KPI", is important for us.
- Today, Ukrainian-Japanese cooperation is developing on a large range of areas - said during the meeting Olexandr Yakymenko - and this event is evidence that in the scientific field these ties are particularly strong. Significantly, it is in the KPI, which is the leading educational and scientific institution of our country in many areas, including in the field of training specialists for space research.

Ambassador of Japan, whose previous activity was associated with work in different fields of science, technology, education and culture, assured the participants that he is intended to serve for the further development of friendly relations between our countries and try to use the most of all their skills and experience.
One of the interesting direction of deepening such relationships can become realization of the idea, which was expressed during the meeting vice-rector of International Relations KPI Serhii Sydorenko, about the cooperation between the Museum of scientific achievements and innovations of Japan "Miraikan" with the State Polytechnic Museum at "KPI "and Exhibition of innovative projects of Scientific park" Kyiv Polytechnic ".

We should say about "Miraikan" with a special mention. The name of the museum is translated from Japanese and means "receptacle of future" and fully reads in conformity with content. It is based in Tokyo 2001. The exhibition is dedicated to the latest technologies and developments that, of course, changed our lives relatively soon. Here are prototypes of tomorrow's computers, samples of the latest medical technology, a variety of intelligent devices and operating robots, goods made of ultramodern materials and other great deal. On each of the exhibits you can learn more from nearby monitor, which displays information at the request of a huge digital library of the museum. Most of all is on display in the museum is not only possible but necessary to touch by hands. Visitors can even try on the role of researchers as on the second floor are situated the laboratories, where you have the opportunity to become a member of various experiments. In "Miraikan" almost every day there are seminars, lectures or tutorial with famous scientists (even Nobel laureates), which can visit everyone who is interested. Much of the Tokyo museum`s area occupied by exhibits on space subjects - from elements to show space technology systems that allow getting acquainted with modern concepts about the universe.
For that reason it is hoped that the dummy of space rocket, that is presented by the Ambassador of Japan, will be the "first swallow" not only in the further deepening of KPI partnerships with Japanese universities and research organizations, but also in the way of establishing relationships with the Land of the Rising Sun museum workers. And that this cooperation will be useful and interesting for both of our sides.