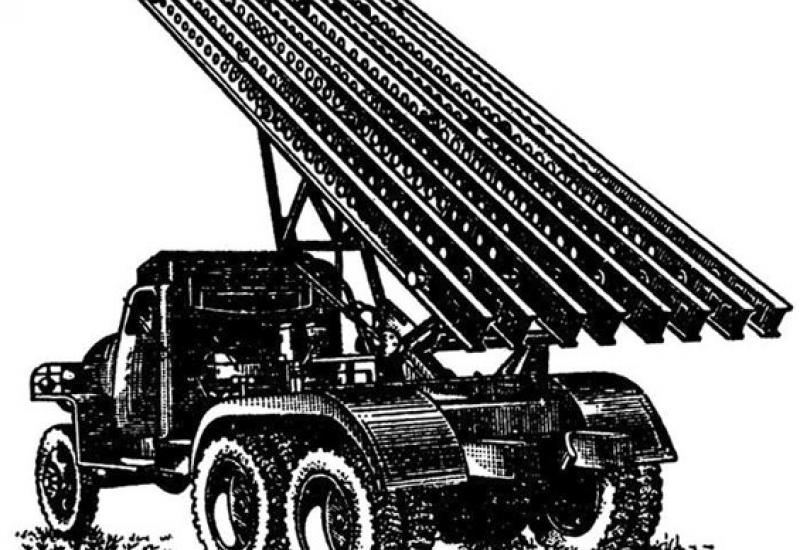 One of the most famous symbols of the Great Patriotic War of 1941-1945 is famous "Katyusha" – the fighting vehicle of rocket artillery.

There are many versions of the name of this formidable weapon. On one of them, it is associated with the symbol "K" on the body mortar – they were produced at Voronezh factory named after Comintern (Komintern in Russian), the other - with popular during WWII song. There are other assumptions. In any event, veterans loved to give nicknames weapons.

... Following the adoption of aircraft armament 82-mm rockets class "air-air" MS-82 (1937) and 132-mm rockets class "air-land" RS-132 (1938), as well as their successful use during the Spanish Civil War (1936-1939) in the fight against the fascist rebels and the Italo-Germanic invaders, Chief Artillery Administration has set the developer shells - jet Research Institute - the task of creating reactive systems of salvo fire projectiles through RS-132 .

Under this task the summer of 1939 the Institute has developed a new 132-mm high-explosive shell, which later received the official name of M-13 and compared with aircraft’s RS-132 had greater flight range and more powerful combat unit.

It was also developed a self-propelled launcher. The first version was established on the basis of two-axle truck ZIS-5 (Plant named after Stalin, the fifth model) and had the designation MU-1 (Mechanized unit, first sample). The launcher was 24 guides mounted on a special frame across the longitudinal axis of the vehicle. Tests settings have shown that it does not fully meet the requirements because its design made it possible to launch rockets do just across the car. Thus there was a danger while driving the cab car fire on the action of hot gases, which also harmed jet elements of unit and rocked it, that worsened the accuracy of fire. In addition, it was assumed that the charge launcher should be done from the front of the guide, which was extremely uncomfortable and require a lot of time. The car ZIS-5 had very limited permeability.

Considering the results of the tests, Jet Research Institute has developed a new launcher MU-2, which in September 1939 was adopted by the main artillery directorate for site trials.

The unit, which was established on the basis of triaxial terrain truck ZIS-6 had 16 guides along the axis of the vehicle. Every two guides were connected to form a single structure. As in the first installation option for greater stability during firing were provided jacks, but due to its location along the chassis rails cars, forces that rocked launcher, passed along the axis of the machine on two central jacks, located near the center of mass of the car, so that rocking was minimal. Charging of the unit was carried out from the rear end of the guide, which was much easier and made it possible to significantly increase firing rate. To protect the crew from hot gases rockets glass cockpit was covered with armored folding shields.

Range of the projectile M-13 weighing 42 kg reaches 8470 m. Time transfer launcher to the firing position was 2-3 minutes, the vertical angle of attack was in the range from 4 ° to 45 °, and the angle of the horizontal fire was 20 °. All 16 shells could be released just in 7-10 s. This launcher was mobile enough, because it allowed movement in the charged state at a speed of 40 km / h.

During the test the important feature of volley firing rockets was established, shock waves resulted the simultaneous rupture of several shells in a limited area from different directions added to each other thus much increasing ravages of each shell. 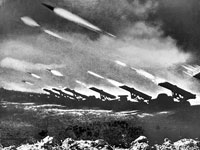 The firing tests were completed in November 1939. The institute was ordered to produce five launchers for military trials. Another unit was ordered by the Navy Artillery Department for use as a coastal defense system.

Despite the apparent effectiveness of rocket artillery, work on its implementation carried out very slowly. And just before World War II, June 21, 1941, the unit was represented to the leaders of the CPSU (B) and the Soviet government. On the same day, a few hours before the beginning of World War II, it was decided to urgently deploy serial production of rockets and M-13 launcher, which received the official name BM-13 (Battle Machine -13).

The first experimental rocket artillery field battery in the number seven units were sent to the front on the night of 1 to 2 July 1941 under the command of Captain Ivan A. Florov (1905-1941). His first salvo in 15 hours 15 minutes 14 July 1941 battery completely destroyed Orsha railway junction with German trains, which were on it.

Exceptional effectiveness of the Battery Captain I. Florova and formed followed by seven more such batteries contributed to the rapid increase in production of missile weapons. With the receipt of equipment from industry, rocket artillery regiments began forming. One volley each of which was 576 shells. This manpower and military equipment enemy was destroyed an area of over one square kilometer! These regiments were officially called the Guards mortar regiments of artillery reserve of the Supreme Command.

It should be note that normally the high rank of "Guards" during WWII military was given to military formations for heroism, courage and high military skills, manifested directly in the fighting. At the same time the regiments of the rocket artillery since the fall of 1941 got this title at once after their formation. This way it was emphasized great importance as a powerful rocket artillery weapons and special responsibility of personnel for combat missions.

It should be noted also that the units were so secret that it was even forbidden to use familiar to traditional artillery armament command "Fire", "volley". Instead of it, the teams used the word "sing" or "play" (which may also have been associated with the song "Katyusha"). And for our infantry the volley "Katyusha" was the most pleasant music, as opposed to the enemy, who is also a music system called them "Stalin's organs" (due to strong terrific roar that arose during the launch projectiles).

Due to the fact that the production of launchers BM-13 urgently deployed at several companies that have different production facilities, design installations made some changes caused accepted these companies manufacture process. In addition, in the mass production stage deployment launcher designers have made a number of design changes. The most important of these was the replacement guides like "Sparky" for a better guide of "beam".

Thus, during the first two years of the war it was used ten varieties of the launcher BM-13, making it difficult to train the personnel of Guards mortar regiments and adversely affected the operation of equipment. As a result it was developed and adopted in April 1943 the unified (normalized) launcher BM-13N. The structure has reduced complexity, time and cost of manufacturing launchers. The mass of the artillery unit was reduced by 250 kg, and the cost - more than 20%.

The fighting and performance capabilities were increased significantly. By introducing the armored fuel tank, fuel pipe, side and rear walls cab driver it has been enhanced survivability launchers in combat. And increased arc of fire, increased stability launcher in stowed position, improved lifting and turning mechanisms.

As BM-13 fighting machine BM-13N could fire M-13 and M-20 rockets, which entered service in June 1942. The rocket shell M-20 was the only explosive shell of caliber 132 mm. The mass of the explosive in its warhead was increased to 18.4 kg compared with 4.9 kg projectile M-13, making the shells of M-20 successfully used for destroying enemy field fortifications. The disadvantages are the decreasing of a new missile firing range (less than 5 km) and the fact that because of the great length they can be run only from the upper rails combat vehicles, twice reduced mass volley. Therefore, after the development of more powerful explosive rockets M-30 and M-31, M-20 shell was removed from production.

The missile M-13-CC (improved accuracy) adopted in April 1944 for for combat vehicles BM-13 and BM-13N was more successful. Researches, conducted in 30s, have shown that the accuracy of feathered rocket could be improved by its slow rotation during the flight. To do this in front of the projectile M-13 was performed 12 tangentially located openings through which during the rocket motor propellant gases out of what was provided by the rotation of the projectile. Although the range of flight of the projectile with decreased slightly (7.9 km), improving accuracy boosted the density of fire three times compared with shells of M-13.

Also significant factor that increased mobility of tactical rocket artillery units armed units BM-13N, was that as the chassis for the launcher was used powerful American truck "Studebekker US 6x6", which was delivered in the USSR under Lend-Lease. This car had increased permeability, which ensured a powerful engine, three driven axles (wheel formula 6x6), splitter, winch for self-pull and a high position of all parts and mechanisms that are sensitive to water.

Creating launcher BM-13N was finally completed testing of serial combat vehicle BM-13. As such, she fought up to the end of the war. In May 1, 1945, the army had 3081 units of armored rocket artillery of various models.

... In the postwar years, taking into account the vast experience of combat employment of the first examples of rocket artillery domestic industry developed more powerful descendants of the famous "Katyusha", "Grad", "Hurricane," "Smerch," "Prima", which is one of the most compelling deterrence of some hot heads. After all, everyone knows: the one who comes to us with a sword, he will get such a "slap", including followers of "Katyusha", which he did not recover for a long time.