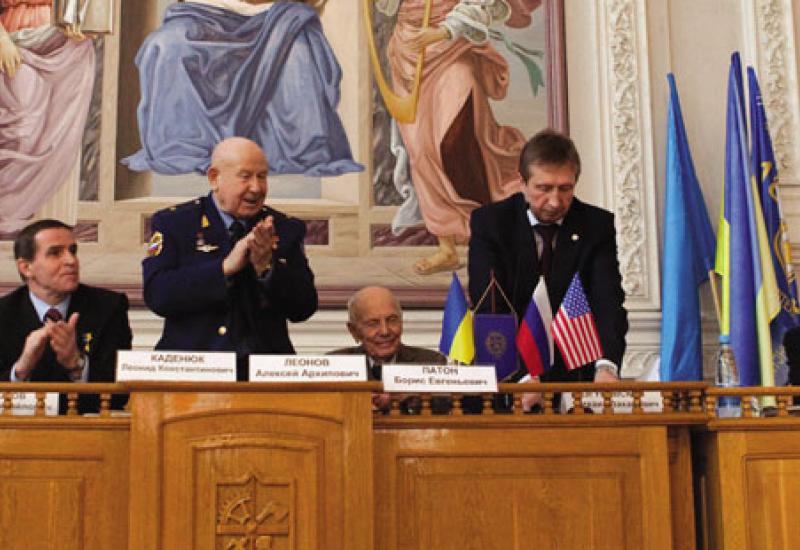 Celebrations to mark the 45th anniversary of the exit of the first man in the open space, and the 35th anniversary of the joint flight program "Soyuz-Apollo" took place in NTUU "KPI" on March 30. Among the guests there were  A.A. Leonov - Soviet cosmonaut, twice Hero of the Soviet Union; V.M. Zholobov - Soviet cosmonaut, Hero of the Soviet Union, Chairman of the Aeronautical Society of Ukraine; L.K. Kadeniuk - Ukrainian cosmonaut, Hero of Ukraine; Academician Boris Paton - President of the National Academy of Sciences of Ukraine; Academician of the National Academy of Sciences of Ukraine V.P. Gorbulin, a graduate of the KPI; Academician Ya.S.Yatskiv - Director of the Main Astronomical Observatory of the National Academy of Sciences of Ukraine; A.V. Petrov - Chairman UMACO "Constellation"; E.I. Kuznetsov - Deputy General Director of NSAU; representatives of the US Embassy in Ukraine and the Russian Embassy in Ukraine, veterans of Baikonur, Kapustin Yar, Plesetsk and others. In the hall of the Academic Council there was the meeting of  teachers and students of Kyiv Polytechnic Institute, members of MAS"researcher", members of the public and the media. 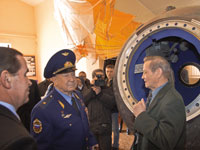 Air Force Major General of reserve Alexei Leonov was born in 1934 in the Kemerovo region. He was in the cosmonautics from 1960 to 1982. He made two space flights: 18-19 March 1965 as a co-pilot of the spaceship "Voskhod-2" with P.I.Belyaev, in which for the first time in the world came out in open space (the event lasted 12 minutes 9 seconds); 15-21 July 1975 as commander of the "Soyuz-19", together with the Soviet cosmonaut V.M.Kubasov on the experimental international program "Soyuz-Apollo".

At the end of 1960 with a group of cosmonauts, he was preparing to fly to the moon. From 1970 to 1982 he was the Deputy Chief of Cosmonaut Training Centre of Yuri Gagarin, from 1982 to 1991 - First Deputy Head of the Center for Space and flight training. In 1968 Leonov graduated from the Air Force Engineering Academy of M.E. Zhukovsky. In 1981 he defended his thesis for the degree of candidate of technical sciences. He is the author of "Features of psychological activity of astronauts", "solar wind" et al., Laureate of the State Prize of the USSR, Lenin Komsomol Prize.

First there was a press conference for the media. Questions were addressed mainly A.A.Leonov and touched his ties with Ukraine; dangerous moments that occur when spacewalk and landing "Voskhod-2"; prestige of the cosmonaut’s profession, his memories of S.P. Korolev and the like.

The second part of the meeting has started with the demonstration of a documentary film about the 1965 exit into space. Phrase said A.A. Leonov after returning to the ship "report: one can live and work in the space" caused by loud applause in the hall. Then A.A.Leonov has shared his memories of those events and told about the features of the flight program "Soyuz-Apollo". There was also a documentary about the flight.

At the meeting there were speeches of  Academician B.E. Paton, cosmonaut L.K.Kadenyuk, Counselor of the Embassy of Russia in Ukraine S.S.Kuznetsov, employee the Economic Department of the US Embassy in Ukraine for International Cooperation Ladislav Beranek, Rector of NTUU "KPI" M. Z.Zgurovsky and others. Here are some highlights from the performances. 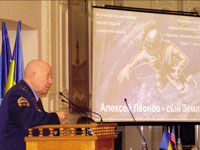 AA Leonov: I have many links with Ukraine. In the early '50s on the assignment of the Young Communist League I went to Kremenchug, and then Chuguyivske flight schools, then served in Kremenchug, met my future wife. We live together already 50 years. We visited annually our Ukrainian relatives.

How was the spacewalk? The trapdoor was opened over Africa. The speed was 8 km / s. Over Turkey I began to look at – there was in front of me a view of the 2750 km from the Black Sea to the Baltic Sea, the Urals and the Caucasus. One could  hear how the heart beats, there was  a voice from the Earth in headphones: "And here we are see how you roll over, go home "(later I have realized that it was the General Secretary of the CPSU). During the preparation to the flight  we worked out three thousands samples of  emergencies. However one cannot to oversee everything. Therefore, when the suit was inflated (and to return one needed to pull up a 5-meter tether - put on 20-mm locking rings, located each 40 cm) without the agreement with the Mission Control Center I had to reduce the pressure in the suit (being aware of the danger of saturation with nitrogen) and run all actions. The remaining time was only 5 minutes of daylight, then the ship was hiding in the shadows. In airlock I has swam  headfirst, there turned (against any regulations) and in came down to the ship. And the adventure did not end there, because the lander had to put in manual mode in the taiga, two days we were waiting for rescuers (Overboard - 25 ° C) and then we had to ski to get a search helicopter.

One of the interesting points of the joint flight "Soyuz-Apollo" - as we were treated  the Americans. We offered them tuba with the words "Stolichnaya", "Vodka" (these was clearly seen in the film. - Ed.), Guests have refused at first, we insisted on the Russian tradition. What was surprising the astronauts, when all the tubes were filled with ... the Ukrainian borsch. By the way, one of the members of the flight - Thomas Stafford wished to have in their family Russian line and adopted two Russian boys, one of them is already flying. By the way, the flight of "Soyuz-Apollo" was of great political significance - the millions of earthlings demonstrate that mutual understanding between peoples is possible and necessary. Under the program fateful handshake was going to happen, when the ships were flying over Moscow, but on own initiative we opened the hatches over the Elbe, showing that the children of those soldiers who fraternized in World on earth are capable fraternize and in space.

The general requirements for admission to the cosmonaut are: the appropriate level of intelligence, good physical fitness, hearing, sight, teeth, cardiovascular system, highly stable nervous system. If the school you can still afford to work without straining, the dawdle in higher education is an unacceptable luxury. Success comes to those who work. 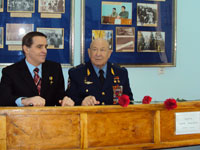 BE Paton: O.A.Leonov - a real hero of all mankind,  his name will be remembered for the ages. He participated in historical events that influenced the development of civilization. Alexei Arkhipovich not only the hero of space, but also a wonderful artist and a consummate storyteller, so we are waiting for his new book. We loved, love and will love you, dear Alexey Arkhipovich.

LK Kadeniuk: It was a difficult task - to pave the way into space. The first cosmonauts can rightly be called the sons of the Earth. The probability of success sometimes was less than failure. I also really wanted to go into space. There the space is perceived as other geometric entity – it is multidimensional. The current space technology is virtually exhausted. Today's students will design devices that will fly fast and far. The future engines will work with natural forces and energies that exist in the universe. Learning how to create a multi-dimensional space, we can move from one time to another. Science Fiction? But it can become a reality.

S.S. Kuznetsov: When watching movies I have had a lump in my throat  - so vividly remembered the space odyssey 1965 and 1975. There are in the history many memorable events, however not all of them are such iconic as those. And this event, which involved O.A.Leonov - the first spacewalk and the first international handshake in orbit – were significant for our planet. We have nothing to share in this world, the Earth is too small to shred it.

L. Beranek: Flight, in which participated A.A.Leonov in 1975, has marked the beginning of peaceful cooperation in space. And today it continues on the International Space Station. The Braves, who now exit into space and work there for 8 hours in a row, try to achieve the impossible and a little more, but the first in this galaxy there was  Russian A.A.Leonov. Current students should preserve and multiply the traditions of their compatriots.

M.Z. Zgurovsky: "KPI" is a platform for cooperation between Ukraine, Russia and the United States. A year ago, with the participation of former New York Mayor Rudolph Giuliani on campus it was installed a monument to pioneer helicopter Sikorsky, who studied in the KPI. He worked in Russia, his most famous projects carried out in the United States. And now the space theme brought together representatives of the three countries. Let continue to multiply our contacts, and the results will not keep you waiting. I am sure that this meeting will leave the mark in the hearts of the present students.

The teleconference with the Mission Control Center in Houston (USA) was the last event at the program of the celebrations. The astronaut Heidemarie Marta Stefanyshyn-Piper - US Navy captain, of Ukrainian origin, who became the eighth female astronaut who made a spacewalk, answered to the questions of the audience. In 2007 M.Stefanishin-Piper visited his relatives in the Lviv region, where her father was born, and met with the President of Ukraine, which awarded her the Order of Princess Olga of III degree (for courage and bravery shown in the exploration of space, strengthening the friendship between the Ukrainian and American people).

March Stefanyshyn-Piper said that the dream of becoming an astronaut was born during the Russian-American flight in 1975. "I know Ukrainian, so I can learn Russian, and in the future, too, work in space as part of the US-Russian crew" - thought then a girl. Since then, she has successfully completed Massachusetts Institute of Technology, was admitted to the astronaut team, made two space flights. Addressing the students, she said: "The most important thing - to learn and work. It is necessary to choose what interests you. If I did not like math, I would not be an engineer. I would not be happy in my life, it would be difficult to work with. Years, the university were hard, but it was the happiest time, because I was doing what I was wondering. "

In conclusion A.A.Leonov gave Kyiv Polytechnic author's copies of his paintings on the space theme. 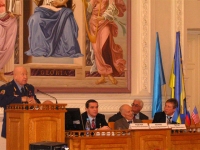 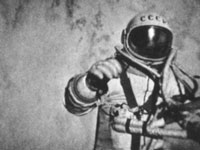