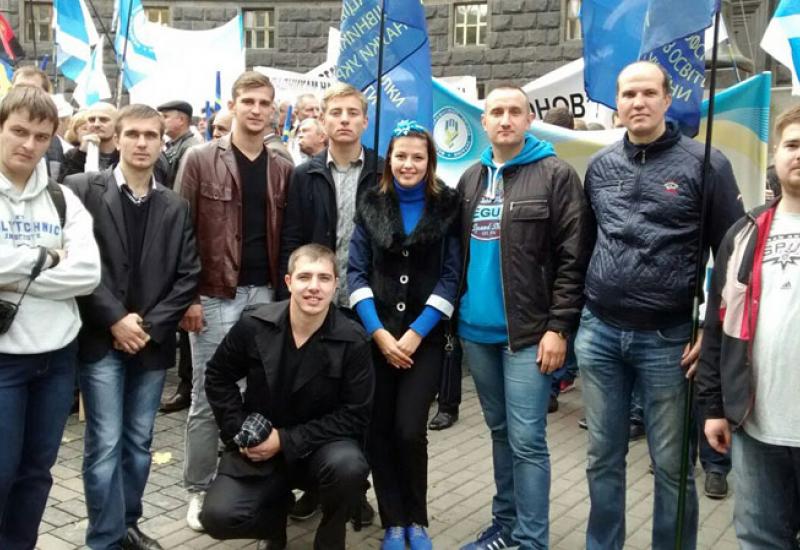 The Agreement defines the relationship of administration and trade union organization, as well as the responsibilities of each of the parties as at the state level as well as the level of university, and regulate the relationship between the administration of universities and the trade union committee of students. Under these agreements, it is secured the participation of the trade union committee of students representatives and representation of the interests of students in the various committees of the University (scholarships, settlement, crime prevention, and other), handling issues affecting the interests of the students and coordinate all documents relating to the socio-economic problems of the students.

Social protection is the primary statutory objectives of the union.

One thousand seven hundred thirty-one students received material assistance during the reporting period totaling 946,880 UAH. Assistance was given to the persons with disabilities, orphans, and half orphans due to the death of a parent, treatment, surgery, rehabilitation, and students from large families, student families with children, single mothers, and students with a difficult financial situation. According to the "Regulation on the provision of financial assistance," decisions are made not by the trade union committee, but at the level of the Union Bureau. The trade union maintains records of assistance provided to students.

In some special cases when significant funds were needed, Kyiv City Organization of trade union gave the financial assistance. D.Y.Andrievsky and R.P.Kisil are the members of this organization.

The trade union through the Kiev Student union association gives preferential student tickets for travel in the metro for 50% of the total cost (for the period - 248 564 tickets). Students’ international tickets ISIC were issued (1480 tc).

Students- orphans can be treated at a free health center university and get a free ticket to rest. It was issued 180 tickets for these students through Kiev trade union organization.

Student Union Committee actively defenses the interests of students, speaking with applications to the administration and public bodies. During 5 last years, it was sent about 100 letters-applications concerning the most important issues. The trade union took part in their solutions.

Let us name the basic among them:

2. Applied to the Kiev City Administration and Ministry of Education and made the abolition of CRD requirements raise pay for the accommodation of 3 times.

3. Achieved the limitation by establishing pay the accommodation at different universities no more than 40% of 730 UAH (the minimum academic scholarships, 2011).

4. Initiated order rector of the procedure for issuing certificates of training students in the faculties / institutes in "KPI", which set term of the next day after the application.

5. Applied to the Anti-Corruption Commission with proposals for opacity evaluation for admission to graduate school. Included. (2012).

6. Initiated continuing further shortened session after the semester due to Euro 2012.

7. Proposed abandon student tickets, combined with a payment card (2012), which created many problems for students.

9. Participated in the working group for development of the Law of Ukraine “On Higher Education”. Initiated the process of bringing scholarship to the subsistence level, the real industrial practice, free use of social infrastructure.

10. Together with Trade Union of the educational and scientific workers of Ukraine achieved the cancellation of the Presidential Decree n.39.2, which envisaged reduction of teachers and increasing of training groups (2012).

11. Together with the trade union of Kiev Universities and Kiev organization of trade unions forced the Treasury to eliminate the delay of payment for utility services totaling 1.5 million UAH, which led to non-payment of salaries and scholarships (2013).

12. Adoption of 01/03/2014 by Cabinet of Ministers of Ukraine Resolution № 65 "On saving public money and prevent loss budget," threatened summer recreation for the students and workers of NTUU "KPI". Trade union of students and staff have achieved a withdrawal of some clauses of the decision. The recreation season was carried out.

13. Achieved providing students the possibility to retake exams during the session to improve the rate.

14. Annually conduct online surveys and monitoring of temperature conditions in all buildings to determine the urgency start of heating.

15. Each year, the Social Insurance Fund tries to cut funding resort dispensary. We are working to withhold funding at the same level. Currently we are working to keep sanatorium in 2015.

16. Repeatedly appealed to the leadership of the police against the violation of the rights of students. According to trade union of students appeals in the last 5 years 5 police officers were dismissed.

17. In September and October of this year, it appears that several thousand students were absent in a State Electronic Data Base of Education, because of it they could not get discounted tickets for travel. Trade union appealed to the administration, informed students, every day controlled the situation to fix the problem at MSE.

18. On the level of KSCA and other state agencies in cooperation with Campus Administration, the work to get grants by nonresident students was carried out.

Organizational commission of the trade union attracts 60-80 activists to help admission committees, agitate applicants to admit KPI. Sponsored by Deputy D.Y.Andrievsky, freshman student diaries are printed, which contain all the information they need. In addition, the students are sent internal regulations, notes on settlement, KPI maps.

Sports and Cultural Commission. It takes part in organization of inter-universities, national and international culture and sports events. This commission helps also the Faculties and Dormitories both organizationally and financially to carry out different sports and cultural events.

We took part in organization of such events as: Freshman Day, tug of war, Super League on mini sport kernel, Labyrinth, Health Relay, sports days of KPI and others. During last two years we started new mass events, such as: Festival of Extreme Sports X-Games, Paintball Championships, inviting well-known youth rock band performance in the Square of Knowledge (Boombox, Otorvald, FLIT, Anna Maria Bend 5th dimension, Antibodies and others). There were 510 of such events.

We distribute free and discounted tickets for football games involving “Dynamo” Kiev, youth and national teams, basketball and hockey games. There were tickets for sports events – 13000, for theater – 1100. We support our national teams on football, basketball, sports aerobics, sports orientation, rugby and others; we were initiators of creation mini-football team “Polytechnic”, which take part in the competition for the Cup of Ukraine.

With D.Y.Andrievsky support, the ballroom was opened in the dorm. № 20. We took part in reconstruction of playgrounds near 3th and 15th dormitories. We helped to buy sports tools for sports complex of 15th dormitory.

The excursions to the landmarks of Ukraine are organized.

Housing commission. The commission works closely with the University and Campus Administrations to solve the problem of accommodation and living conditions of students. It organizes New Year and St. Nicolay events, as well as carries out the International Children’s Day. In 2010, the children’s playground was mounted near the 22th dormitory.

Recreation. The most important in this direction is the work of the health resort preventive NTUU “KPI”, where each student could improve his health for 136 UAH, which is 10% of the full ticket price. For the reporting period, 13244 students improve their health in this resort. The trade union regularly carries out checks in the health preventive resort, swiftly reacts to the students complains. We want once again draw attention to the university administration on the technical condition of the kitchen and treatment base since overhaul not conducted for 30 years

The last two years students trade union recruits for the base "Mayak" waiters, dishwashers from the students, giving them the opportunity both earn, and rest on the sea.

In order to improve the base "Polytechnic" Students’ Union Committee organized massive subbotniks. It Also helped in acquiring the necessary equipment - electrical and chainsaw, trimmer for cutting grass and others.

In the past year, due to the initiative of trade union activists and instructors, the number of tourists in the camp "Globe” was increased dramatically.

In addition, during the summer vacation the trade union organized students recreation on the bases of partner universities and trade unions through the Kyiv organization in Bulgaria under the program "with union cheaper." In winter, we organized students’ trips to rest on base "Verhovyna", "Krasiya", "Pylypec", "Marilia" and others. 1996 students took advantage of this opportunity with a compensation from trade union of students.

Public Control Commission monitors the quality and price policy of buffets and canteens of KPI, collects suggestions from students to improve feeding conditions, servicing, generalizes and transfers offers to the rental and catering commissions. Although today there are still many questions about catering, last year there has been a positive trend. This is an expansion of the buffet in the 1st building, and the balance quality-price, which led to a rapid increase in demand. It was adopted a clear strategy for the development of student nutrition and, accordingly, a phased plan of reorganization and optimization.

Information Department promptly informs students and receives information from students about any problems and supports the trade union website and VKontakte group.

There is on the site an active topic "question and answer" where the majority of applications require a specific solution to the problem of the student. For five years, it was received over 20 thousand questions, complaints from students, the vast majority - of the problems that were in the sphere of Commission social protection (do not give the bypass list, have not received duplicate of student ID, cold in the audience, no hot water , the doctor issues a certificate, etc.).

For all faculties it was made uniform information booths. There are also displays of our information in hostels. Most of the adopted strategic decisions were taken considering the opinion of students through online surveys.

In 2011 the trade union took part in the defense of recreation "Polytechnic", which prosecutors of Vyshorod district illegally tried to take away from KP. They collected 16,000 students’ signatures, conducted protests, and participated in the trials.

For many years KPI struggled with raiders, who seized the land illegally and erected buildings and gas refills 10 meters from the 18th building. Students’ trade union and trade union co-workers prepared letters, appeals, collected thousands of signatures. We defended the land.

In 2011-2012, in conjunction with the trade union staff, student council and student council of the University campus students’ trade union fought with MES for the election of the rector. We held 5000 participants meeting on the Square of Knowledge, campaign under Ministry of Education, gathered 12,753 signatures of students and teachers to support requests for ad contest. Competition was announced – Rector was selected.

In 2013 there was an attempt of illegal construction works on the Glade. We have asked the Chairman of the KSCA, deputy D.Y.Andriyevsky, met with investors. As a result of our applications, the irregularities in obtaining permits investors were found. Construction was stopped.

When the Euromaydan started, many students took active part in it and the student’s trade union was in the first row of columns at mass actions. On the application from the trade union to the Administration, the decision was taken to give access to the winter session to all students regardless the results of attestations. The corresponding order in NTUU “KPI” was issued.

The center to collect warm clothes, medicines and transfer them to Maydan was created in the trade union. After the bloody events on the Grushevska Street we performed the volunteer work in five hospitals with wounded there, helped with medicines, food, clothes. Our trade union organizes the help to the ATO soldiers.

The primary trade union of students NTUU “KPI” is a powerful collective, which can solve the most difficult problems to defense the students’ interests on the all level of power. The last 5 years of our activity in critical situations persuasively proved it.