To the 70th Anniversary of National Academic Choir 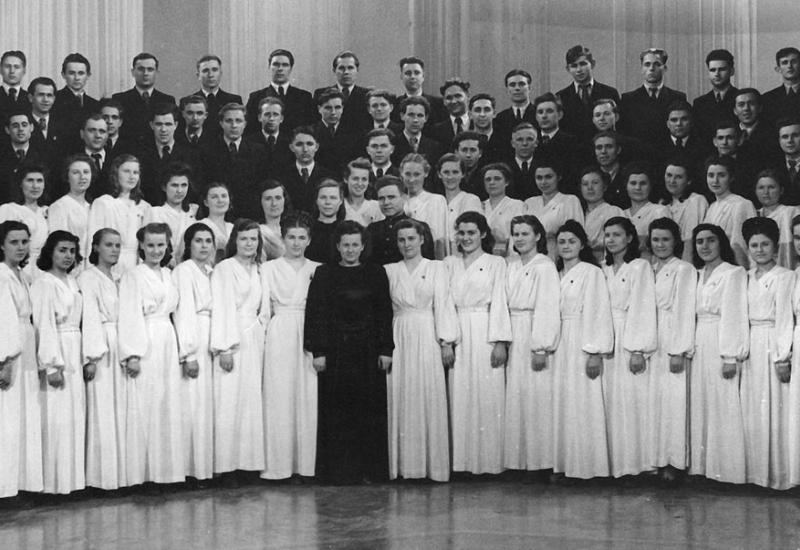 “National academic choir of KPI”. For the hundreds of former and present students of KPI these words really mean a lot: high art, funny pranks of energetic youngsters, friendship and the spring of life.

The history of National academic choir of KPI began in autumn 1947 when the 2nd year student of Kyiv Conservatory Padalko Lidiya Oleksandrivna became a concertmaster for KPI choir of 12 people. In a month she led them and suggested each bringing 3 people. That’s how it was created. Soon he started singing а cappella.

A year later, KPI choir took second place at the city review of choral ensembles in Kyiv, in 1949 it was the first on the city olympiad of higher educational institutions and the second on a republican survey of amateur groups. In 1954, on a republican review devoted to the 300th anniversary of the reunification of Ukraine with Russia, the choir took first place, it was awarded the Honorary Diploma of the Presidium of the Supreme Soviet of the Ukrainian SSR, and Lidiya Padalko was awarded the title of Honored Artist of the USSR.

In those years, the participant of the band Vladimir Chubinsky wrote the words and the melody to "March of KPI", which for more than half a century is a musical symbol of this place, and the piece of melody of which sounds every hour at the first building of our university. As time went by various rituals and customs have appeared in the choir, thanks to which it became a spiritual center for its members and unites many of those who have long before said goodbye to their student’s life.

In 1956 KPI choir was invited to sign Gaudeamus on the 1st Student Festival in Tartu (Estonia). Since then, it has repeatedly become a party to these holidays - in Riga, Vilnius, Tallinn, as well as choral contests "Juventus" held in Kaunas (Lithuania), in 1960 it became the winner of the All-Union Contest, which was held within the framework of the Decade of Ukraine in Moscow. For the great contribution to the development of choral art, the choir received the title of folk, and its leader Lidiya Padalko was awarded the Order of Honor.

Since 1964 the choir was headed by a graduate of the Kyiv Conservatory Mary Tiberiyivna Palffi. From 1966 to 1968, the choir was headed by the outstanding figure of Ukrainian choral art Viktor Mikhailovich Ikonnyk. Under his leadership, the team substantially updated the repertoire, improved its performance technique, achieved new heights in sound.

In 1968-1970, the artistic director of the choir was the descendant of the classics of Ukrainian music Vitaliy Romanovich Lysenko. He introduced new colors into the palette of the collective, contributed to the growth of the vocal culture of the choir.

Since 1970, Lidiya Padalko was once again in charge of the choir. In 1974, she focused on work at Kyiv Music College named after R. Glier, and the team was headed by Galyna Lukivna Gorbatenko, who worked here as a choirmaster since 1972.

Under the direction of Galina Gorbatenko (1974-1989), the National Academic Choir of KPI reached new levels of performance, entered the choir elite of the USSR. The collective became the laureate of the 1st and 2nd All-Union Festival of Folk Art (1977 and 1988), received the first degree diploma for the victory in the Republican competition devoted to the 1500th anniversary of Kiev (1982) and elected the title of the best youth collective at the festival of choral art in Saratov (1990 ) The choir became the winner of the "Solar Clarinetti" TV-contests, took part in the opening of the Kyiv folk choral philharmonic society. In 1989, it won the Grand Prix of the First All-Ukrainian Choir Contest named after Nikolai Leontovych, who gathered the best amateur choirs from all over Ukraine, and its artistic director received the Grand Prix as the best conductor. In different years, along with Galina Gorbatenko, chorus players Mykola Ammosov, Lidiya Bondarets, Sergiy Malovanov, Alexander Polischuk, Victoria Skopenko, Lyudmyla Bayda, Yuriy and Volodymyr Kurachi, Yuri Galatenko, Vyacheslav Rubel worked. Subsequently, they became recognizable specialists, leaders of famous art groups.

Since 1989, Yuriy Galatenko, Olena Sedykh and Tetyana Lutsenko have headed KPI choir. In autumn 1992 the choir performed a tour to Spain, where it demonstrated high performing skills.

The difficult period in the history of the state affected the choir as well. The 50th anniversary of the choir's foundation (1997) was celebrated only by veterans ... The renaissance of the chorus began in 1999 by two friends 4th year students of the National Musical Academy of Ukraine named after P. I. Tchaikovsky. Viktor Rud, who became an artistic director and conductor, and Ruslan Bondar, who became the choirmaster. The work of an amateur student choir was immediately turned to a professional path, classes on the elementary theory of music were conducted as well as solfeggio and the foundations of harmony. In two months of hard work the choir gave a first small concert at the Center for Culture and Arts of NTUU "KPI".

In 1999-2000 academic year the choir performed 7 times, twice went to a creative meeting, took part in the Holiday of the Choral Art on the Day of Kyiv, recorded their first works in the studio. Since 2001, the chapel has been headed by Ruslan Bondar. The choirmasters were Elena Ponomarenko (Dyachenko), Yuliya Aksent (Dunaeva), Victoria Vitrenko, Maksim Kovalchuk, Oleksandra Politsa, Maria Mazur and Julia Neduzhko.

All these years the choir confidently, step by step, moves through the development and improvement. So I’d like to draw your attention to the list of their achievements.

2003. Participant in the international art festival in Ankara, Turkey; Laureate of the second prize at the X International Contest-Festival of Choral Art "Yuzhnyaya Palmira" in Odessa.

Participation in the 56th International Choir Contest "European Music Festival for Young People", Nerpelt (Belgium). Contestants from 92 countries of the world fought for victory in six groups. The National Academic Choir of the KPI took the 2nd place in its category (2008).

Laureate of the Second Prize of the XV All-Ukrainian Orthodox Festival of Spiritual Chants "From Christmas to Christmas" in Dnipropetrovsk (Dnipro); Gold Diploma at the Choir Contest in Slovakia (2009).

2010. The second place at the International Choir Festival-Contest, held in Preveza, Greece, in which 25 choirs from the European Union, Russia, Argentina, Canada, China, Japan participated. The final gala concert of the laureates of the competition was held at the amphitheater of ancient Necropolis.

2011. Laureate of the first prize of the XVII All-Ukrainian Orthodox Festival of theological chants "From Christmas to Christmas" in Dnipropetrovsk (Dnipro); Best director diploma and best soloist of the festival. Solo concerts in Kristiansand, Flekkenfjord and Stavanger Norway.

2013. University of Coimbra invited the choir to join German and Brazil choirs to take part in festival together. Moreover they took the first place in choir competition in Kaunas, Lithuania.

Six concerts in Franch city Gerzat as a part of the choral music festival (2014).

2016. They took the first place in IV International contest of choral music named after Gavriil Musicescu that was held in Yassy, Romania. Also they gave Christmas concerts in ancient German churches in Dresden and Weimar and joint performance with Neuer Chor Dresden, tour to Baltic countries with concerts in Riga, Waltma and in the capital of Finland Helsinki.

National academic choir of KPI is often invited to be shot in well-known programs such as Liga Smihy, Ukraine’s got talent and Master-Chef, etc.

The modern repertoire of the choir is extremely wide: classical choral works, spiritual music, Ukrainian folk songs and various modern songs. Every year thy test something new, trying not to dwell on the successes they’ve reached, since they ambitious plans including trips to other countries, the recording of new albums, and participation in international contests and much more.