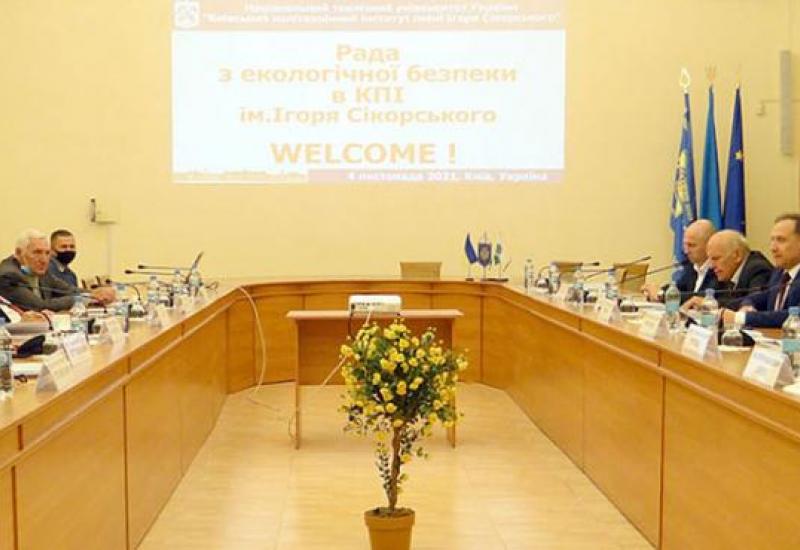 At Igor Sikorsky Kyiv Polytechnic Institute on November 4, a memorandum of cooperation was signed with the International Non-Governmental Organization "Environmental Safety Council".

The document was signed during a visit to the university by a delegation of representatives of the governing bodies of the Council, which included its chairman Sergii Orehov, his first deputy Valerii Tsybuh, secretary of the council Eduard Riabyi, member of its board Mykhailo Kornienko and others.
The meeting with the partners began with a tour of the university, which was conducted for them by the Rector of Igor Sikorsky Kyiv Polytechnic Institute, Academician of the NAS of Ukraine Michael Zgurovsky. A certain prologue to this tour was a tour of the room in the historic building №1, where the first cosmonaut of independent Ukraine Leonid Kadenyuk worked, and the laying of flowers to its bas-relief. And it is no accident - Leonid Konstantinovych was, and by decision of the Council, forever remained its Honorary President. The guests also walked through the alley of outstanding engineers and scientists, whose lives and activities were connected with Igor Sikorsky Kyiv Polytechnic Institute, got acquainted with the expositions of the State Polytechnic Museum of Igor Sikorsky Kyiv Polytechnic Institute and its department of aviation and cosmonautics named after Igor Sikorsky. This preliminary acquaintance became the preamble of further conversation, during which the directions and prospects of cooperation between the university and the Environmental Safety Council were discussed. The main ones, of course, were identified areas directly related to environmental protection and implementation of relevant projects and technologies.

"Signing an agreement with the Environmental Security Council is an important strategic issue for Igor Sikorsky Kyiv Polytechnic Institute. We would like to offer our contribution to the activities in this direction through scientific research, innovative developments and all the achievements of our scientific schools, - said, opening the meeting, Michael Zgurovsky. - We propose to sign today's agreement with, so to speak, a separate wing of our environment - innovation, which is represented by the Innovation Ecosystem "Sikorsky Challenge Ukraine".

In order to fully reveal the potential of Igor Sikorsky Kyiv Polytechnic Institute in the field of environmental issues and inform about its capabilities in the implementation of the latest innovative developments, the rector made a detailed presentation of the All-Ukrainian innovation ecosystem "Sikorsky Challenge Ukraine", created on the basis of the university. projects. And the head of this ecosystem Inna Malyukova informed the representatives of the Environmental Security Council about the real prospects for further cooperation and presented the program of joint work for 2022. Among the planned events are holding a local competition of start-up projects and scientific and technical developments in February-March next year, as well as a panel discussion "Environmental safety of Donetsk and Luhansk regions" in Kramatorsk, holding a similar competition in May-June, as well as a forum “Decarbonization of the Carpathian industry “ in Ivano-Frankivsk, joint participation in the preparation and holding of the Festival of innovative projects" Sikorsky Challenge 2022 ", etc. It is proposed that the Council participate in the formation of an expert commission that will select finalist projects in the field of "Green Energy, Ecology", and in the formation of the International Jury, as well as in the Forum "Sikorsky Challenge: environmental safety ", which will be held as part of the festival program, and attracting investors, foundations and sponsors. And, of course, in the organization of interaction between investors, enterprises, customers and winning teams of the festival.

It should be noted that the proposals place special emphasis on working with the eastern and western regions of our country as having significant, but not yet fully revealed potential for strong economic growth due to the intensification of innovation and, at the same time, serious environmental problems. need an immediate solution. Serhiy Orekhov also focused on these aspects. "I really like your position on the need to" pull out hidden "professionals, smart and talented people, including students, who could take part in such projects, and help them implement their ideas," he said. - So we are ready to support this program both financially and resourcefully. There are people, there is support in those territories, and it is a sin not to use it. “

After the talks, the memorandum was signed by Oleksii Strutsynskyi, director of the Sikorsky Challenge Innovation Holding, and Serhii Orekhov, chairman of the Environmental Safety Council. The document identifies the main areas of cooperation agreed upon by the participants of the discussion and its forms.

"Today it is of great importance to unite the efforts of all those who care about the development of our country. In different directions, - Valerii Tsybukh summed up the meeting. - The combination in specifics is very important. And the memorandum that was signed today set out very specifically the priorities in our work and provided for all the ways and steps that both the Sikorsky Challenge Holding and the Environmental Safety Council should take.

… According to Art. 50 of the Law of Ukraine "On Environmental Protection" ecological safety is a state of the environment in which "the prevention of deterioration of the ecological situation and the emergence of danger to human health" is ensured. At the same time, according to the same law, environmental safety "is guaranteed to the citizens of Ukraine by the implementation of a wide range of interrelated political, economic, technical, organizational, state and legal and other measures.” In fact, the implementation of this rule is still far away. Therefore, combining the efforts of the University and the Environmental Safety Council is one of the steps to its implementation.