The meeting with the representatives of the company «Anadolu Plazma» 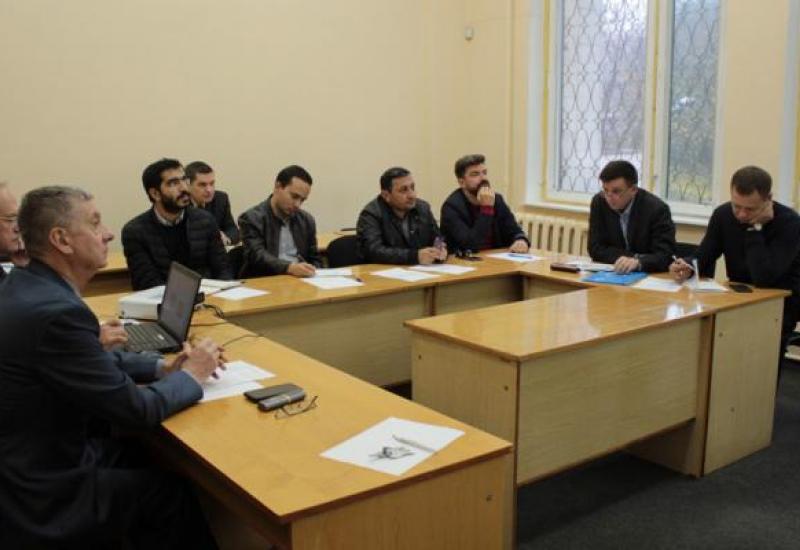 The delegation of the scientific and research and industrial and commercial company «Anadolu Plazma» at presence of Technopark of Gazi University in the city of Ankara (Turkey) visited Igor Sikorsky Kiev Polytechnic Institute on the 24th and 25th of October. The company consisted of the board member Tofik Nagiev, its CEO Ibrahim Ibrahimoglu, the Deputy of CEO Tuna Aktash and the engineer Husein Awnie Wurala.

The purpose of the visit was the acknowledgement with the university activity and its Institute of aerospace technologies, and also the discussion of the directions of possible scientific and technical and academic cooperation.

Next day, the representatives of the company «Anadolu Plazma» visited the Institute of aerospace technologies and learnt more about its work during the second visit. The principal and professor Ivan Korobko gave the general characteristics of this educational and scientific department of the university. Besides, he also told about the preparation in this institute for specialists for other countries. «This Institute has different opportunities for preparation, retraining, and also the certification training for the citizens of other countries, - he emphasized. – Moreover, the preparation has all the educational levels – from bachelor till PhD. Apart from it, we have an opportunity to implement common scientific and technical projects in relevant specific fields».

Oleksandr Zbrutskiy, the head and the professor of the department, gave the presentation about the activities of the department of aircraft control systems. In particular, he stopped on the educational opportunities and scientific developments of the department in the directions of avionics, unmanned aerial vehicles, informational and measuring and control systems and sensors which are used in instrumentation and robotics. Oleksandr Marynoshenko represented the department of aviation and rocket science. His presentation was also dedicated to the questions of specialists' preparation and scientific and technical achievements of the unit in the fields of aerospace engineering, the creation of unmanned aerial vehicles, robotics for various needs, etc.

The last presentation, which was represented by the senior lecturer of the department of aircraft control systems Mykola Cherniak, considered the problems of exploitative characteristics of inclinometers. It is the devices which measure the angle of inclination of an instrument during the well drilling for various purposes and their primary sensors. The guests were especially interested about the opportunities of solving the problems by the specialists of the Institute of aerospace technologies when they were deciding about the negotiations in Igor Sikorsky Kiev Polytechnic Institute. So Mykola Cherniak made a well-grounded presentation considering the reasons of errors' occurrence in the work of such devices and systems, the ways and methods of their elimination, compensation and consideration during the designing, the production and installation of inclinometers' sensors during the creation of appropriate units and putting them into operation, and also about the results of the experience of the department while solving these issues. He did not develop the methods of achieving desirable results, but accurately described the results of the specialists' activity of the department from appropriate directions.

«We see amazing perspectives of cooperation in at least two directions. The first direction is the organization of the students' curriculum and certification training for Turkish students in our university. The second one is improving the characteristics of our devices we use in our works for mining industry», - Ibrahim Ibrahimoglu commented the results of the negotiations.

At last, the participants of the meeting decided to prepare their proposition of signing the framework agreement in scientific and technical and educational aspects in the nearest future. One more idea is to prepare the agreements in appropriate directions and the realization of separate scientific and technical projects. And Ibrahim Ibrahimoglu invited the colleagues from Kiev to visit Gazi University in Ankara and its scientific park.