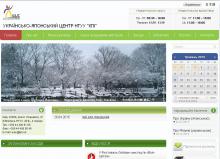 According to the Agreement between the Government of Ukraine and The Government of Japan on technical cooperation and grant assistance dated 10.06.2004 (Tokyo), the Agreement between the Ministry of Economy of Ukraine and Foreign Affairs Ministry of Japan dated 15.07.2005, and the Protocol on technical cooperation between Japanese International Cooperation Agency (JICA) and National Technical University of Ukraine ‘Igor Sikorsky Kyiv Polytechnic Institute’ dated 22.05.2006 the project of technical assistance " Ukrainian-Japanese Center" was started (Project UJC)

The aim of the Center activity is the fulfillment of the functions as the receiving organization (recepient) in realization of the project of technical assistance " Ukrainian-Japanese Center", the development of cooperation between University, its subdivisions and JICA (Japan) in educational, scientific and technical, cultural, economic and other spheres, the assistance for Ukrainian partners in their cooperation with Japanese partners.

Jointly with the “UJC” project UJC of Igor Sikorsky Kyiv Polytechnic Institute performs its activity in such directions as:

Courses of the Japanese language.

With the deepening of relations between our countries the necessity in learning Japanese increases from year to year. By this time, Japanese has been taught only in a few institutions. The courses are oriented on the wide audience who are interested in Japan, have the necessity to master the Japanese language for professional purposes.

The studies are fulfilled with an attraction of Japanese and local teachers. Four-level curriculum is developed by Japanese experts.

The children group has also lessons of Japanese.

There are lessons of ancient arts for those who are willing to know about the Japanese culture and national traditions.

One of the Center’s tasks is the assistance to strengthen the mutual understanding between Japanese and Ukrainian people by giving the informational service, realization of cultural events, giving representatives of both nations an opportunity to communicate. Center’s services include: library, video and audio rental clubs, journalistic stand and an internet-corner.

Books, journals and newspapers (with an exception of recent periodicals), as well as videotapes, audiotapes and CD-disks can be given for home usage. There are computers with the available Japanese language for Japanese sites viewing in the internet-corner.

Among the noticeable events in the organization of which UJC of Igor Sikorsky Kyiv Polytechnic Institute participated are: