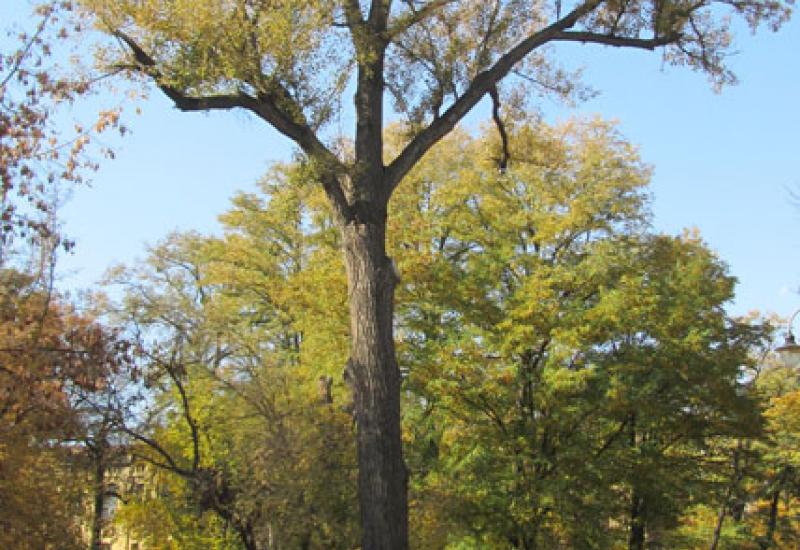 It stands along the sidewalk where hundreds, if not thousands of people pass by every day during an academic year. Hard to say, if a dozen of them pay any attention to it. And we did not pay, although for several years in our newspaper write about trees and shrubs that grow in the territory of the KPI. We talked about ginkgo biloba, Lapin the box elder, bunduchi Canadian, Carey ... We wanted to present first of all, something exotic, the existence of which close to academic buildings is known by a few people, or whose bright and beautiful picture will adorn the last page of the newspaper. And the grandeur of this giant tree is difficult to explore. For this it is necessary to move away from him thirty to forty meters, and even to find a place where it all can seen - because almost everywhere it obscured by the lower crown neighbors.

The accident helped. In May, the wind broke the branch. It fell and blocked the road running along the first and fourth buildings. When workers cut it and loaded into dump truck, it took all the truck body. One branch. And people near the tree looked like Lilliputians near Gulliver. More precisely, as children of Lilliputian. Because the Lilliputians in Swift's novel "Gulliver's Travels" is 12 times lower than people, and that the tree has a height of about thirty meters - that is above every 15-17 people.

Tree in question, - black cottonwood (poplar, Populus nigra), growing near a residential home №1 at the turn to the area of Knowledge. It has more than 100 years. It was planted by employees KPI when they created the park. At that time in the KPI there was an agricultural department, where specialists in landscape architecture were teaching.

They say that the ancient Greeks knew that poplar has beneficial effects on human health and mood. Therefore, these trees grew in every home. They were planted around the place where there were people's congresses, and therefore it was assigned them the scientific name of poplar - Populus (folk). This name was given to the tree by Carl Linnaeus.
Some observers write about a bioenergy, bearing in mind not the energy that is measured in joules, but the other - "thin", the presence or lack of which can only be felt. They argue that the black poplar charges of human with a bioenergy, adds optimism, gives clarity of thought, increases the sense of perspective, intuition. We can say that those who planted this tree on the territory of our institute, were intended just that.

And maybe more. The poplar - a well-known champion of the absorption of carbon dioxide from our streets: Up to 40 kg over the summer! It also cleans the air from dust and harmful emissions. Besides – this is a tree-pharmacy. In medicine the bark and leaves are used, and even buds are rich in biologically active substances, which have antibacterial, anti-inflammatory, anti-allergic, diuretic, analgesic and antiseptic properties.

The life time of the tree is up to 300 years. Therefore, more than one generation polytechnics admire this poplar - if they will look around and not at the next trendy gadget.