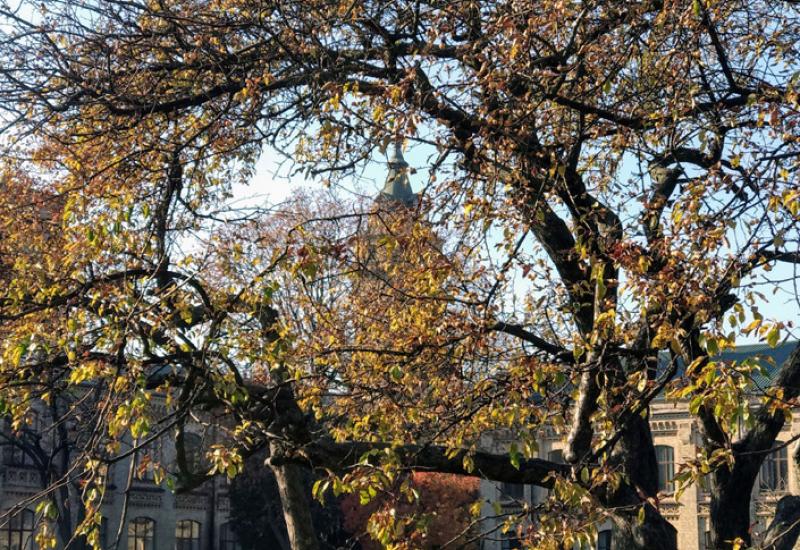 Polytechnicians are already accustomed to the fact that the apple tree, among other trees, is the roundabout of the first building. Another tree of the same beauty grows behind the seventh building. As if in a fairy tale, they please the eye from early spring to late autumn. In the spring they struck by an explosion of blossoming – from white to pink to dark cherry, and in autumn they are dressed in abundant petals of small fruit: one is yellow-orange, the other is pinkish-red. To taste, they are vague, but royal jam made of paradise apples will supersede berry one, both in appearance and taste.

Valuable product. Apples are the most affordable and very valuable food product needed by the body for normal functioning. Since ancient times in Ukraine they are valued for beauty, taste and healing properties. People say: an apple a day keeps the doctor away. Paradise apples contain chlorogenic acid, which promotes the excretion of oxalic acid from the body and normalizes the activity of the liver. Paradise apples lower blood cholesterol levels, reducing the risk of blockage of vessels, the emergence of heart attacks, and the like.

Stories and facts. Apple trees were growing in ancient Greece and ancient Rome, on the territories of Egypt and Palestine. For Yaroslav the Wise, apple orchards were first laid down in Kyiv on the territory of the Kyiv-Pechersk Lavra.

When in Europe another awesome “fruit” appeared, it was compared to an apple. Tomato was called “golden apple” (italian “pomo d'oro”), oranges – “Chinese apple” (the Dutch – “appelsien”). By the way, when the Russian Empire introduced the cultivation of potatoes, its berries were called “devilized apples” – they were poisonous, and in the word “potato” the German “Teufel” – “devil” was heard.

The word “lipstick” is also associated with an apple. It comes from the French “pomade” (“pomme” means apple) and initially meant a medical ointment that was prepared from the zest of certain varieties of apples.

The largest apple registered in the Guinness Book of Records was 1.67 kilograms.

Myths and legends. In Christian mythology, the history of mankind begins with an apple: according to the Bible, it was the apple tree which was the paradise tree of the knowledge of good and evil, the fruits of which Adam and Eve tasted, for which they were expelled from paradise.

From the Greek mythology, we know about the “apple of discord”, a golden apple bearing the inscription “The most beautiful”, which the goddess of discord and enmity ripped over to the banquet, where she was not invited. The goddess Gera, Athena and Aphrodite quarreled because of this apple, and subsequently began the Trojan War. Golden apples appear in the myth of the twelfth feat of Hercules. They grew up in a garden that was looked after by the daughters of Atlas, Hesperydes, and were guarded by the multyheaded dragon that never slept.

One of the greatest scientific discoveries, according to legend, is also associated with an apple. It is said that Isaac Newton was thinking about the force under which the planets move, paying attention to the apple that fell from the branch. After that he began calculations, which eventually ended with the discovery of the law of universal gravitation.

The Slavs have myths about juvenile apples. For thirty-nine lands, in the thirty kingdom there is a garden with young apples and a well with living water. If the old man eats this apple, he gets younger, and should the blind man wash his eyes with water from the well,  he will see.

In the Ukrainian tradition. Our ancestors considered apples to be the symbol of integrity, fertility, immortality and eternal youth. The apple is one of the attributes of the religious holiday of the Savior, or the Transfiguration of the Lord, which is celebrated on August, 19th.

In poetry, the symbolic meanings of an apple are maiden beauty, abundance, purity, goodness. For example, in the folk songs "the girl was boasting”:

I have a face like an apple
I have black eyebrows
At all, I'm a hard-working girl.

Conclusion. Often, children tell a fairy tale about the poor passer-by, in which the Almighty is dressed, to find out how people live on earth. He came to the wonderful apple garden and asked the fruit. Beauty-apple trees rejected him. Only paradise apple tree generously gave her apples. The old man went on, he treated others the crimson fruits of the meeting and told: these are the paradise apples. And they did not end in a bag.

So let our Polytechnic become a paradise where good deeds and glorious deeds do not end.