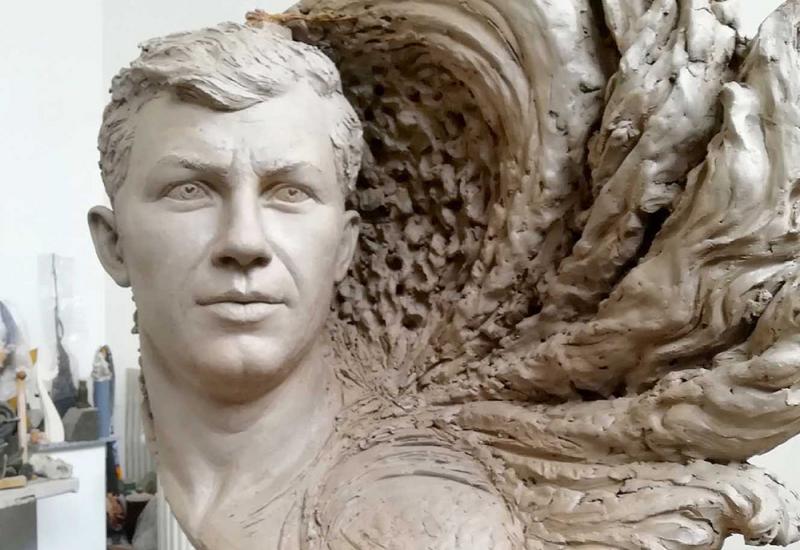 One of the most significant events of this year's сommemoration of the anniversary of the Chernobyl disaster was to be the grand opening in Igor Sikorsky Kyiv Polytechnic Institute monument to one of the first liquidators of its consequences, the Hero of Ukraine, a graduate of Igor Sikorsky Kyiv Polytechnic Institute Olexander Grygorovych Lelechenko. Unfortunately, due to quarantine, its grand opening had to be postponed…

In the first hours after the explosion of the fourth power unit, Oleksandr Lelechenko fought against the nuclear disaster and at the cost of his own health and life saved humanity from another - much more powerful explosion, which could have occurred due to a hydrogen leak in the emergency zone. he took individual measures to disconnect the water mixing equipment of the electrolysis station of the fourth power unit. He knew exactly what doses of radiation he had already received there, but despite his deteriorating health, he continued to work. He was soon sent to the Pripyat hospital, but after the drip, feeling some improvement in his condition, he simply fled from it to the station and returned to the emergency power unit. Then there was a hospital in Kyiv, where they could not save him from radiation sickness. He died on May 7, 1986, at the age of 47.

Representatives of several large Ukrainian energy companies took the initiative to install the monument to Oleksandr Lelechenko on the territory of Igor Sikorsky Kyiv Polytechnic Institute because in 1966 he graduated from the Faculty of Power Engineering of our university.Power engineers also became sponsors of the monument. Among those involved and devote funds for this case are members of the Trade Union of Atomic Energy and Industry Workers of Ukraine (Atomprofspilka), the Chornobyl NPP Administration, Energoatom, several individuals and others. The initiative was supported by the rector of the university Michael Zgurovsky and the Academic Council of Igor Sikorsky Kyiv Polytechnic Institute. It was decided to install the monument to the hero in front of the entrance to faculty he studied at (now the Faculty of Electrical Engineering and Automation, located in the building №20 of the university).

As Vitaliy Kotovskyi, Assistant Rector for History and Architecture and Head of the Department of General Physics, the head of the project told "Kyiv Polytechnic", that the famous sculptor, Honored Artist of Ukraine Anatoliy Valiyev won the competition to participate in the construction of the monument. Several works of this master, by the way, already adorn our university - a monument to students of Igor Sikorsky Kyiv Polytechnic Institute who died for Ukraine, which is installed near the church of St. Nicholas the Wonderworker, a monument "Evolution of Cognition" at the entrance to the university campus from the Yangel street, a bust of Leon Foucault in the Scientific and Technical Library and some others. The architect of the project is the chief architect of the university Stanislav Snezhkin.

Preparation of the territory to the left of the entrance to the building №20, arrangement of the square near it, and preparation of the site for the monument was provided by the staff of the Department of Economic Work of the University. They also significantly updated the entrance to the building. The pedestal of the monument is made of black labradorite mined in the Dnipropetrovsk region. A sculptural portrait of Oleksandr Lelechenko with elements of artistic and decorative framing, modeled by Anatoliy Valiyev (which, by the way, was approved not only by colleagues but also by family members of the hero), was cast in bronze by founders of our university with the support and assistance of the National Art Factory of Union of Artists of Ukraine.

Unfortunately, the quarantine measures prevented the grand opening of the monument to the Igor Sikorsky Kyiv Polytechnic Institute graduate, who at the cost of his life protected the world from an even more terrible catastrophe than the accident at the 4th power unit of the Chornobyl nuclear power plant. The liquidators of the Chernobyl accident, representatives of energy companies, the Star of Hope charity foundation from Sweden and other people were invited to the opening. It was to take place on April 23 - on the eve of the International Day of Remembrance of the Chernobyl disaster. But despite the quarantine and difficulties with timely funding, those who worked on the creation of this monument did a brilliant job, and the bust of the Chernobyl hero will appear in a few days in front of the building, which houses his home faculty. And the grand opening of the monument will definitely take place, but later! ..