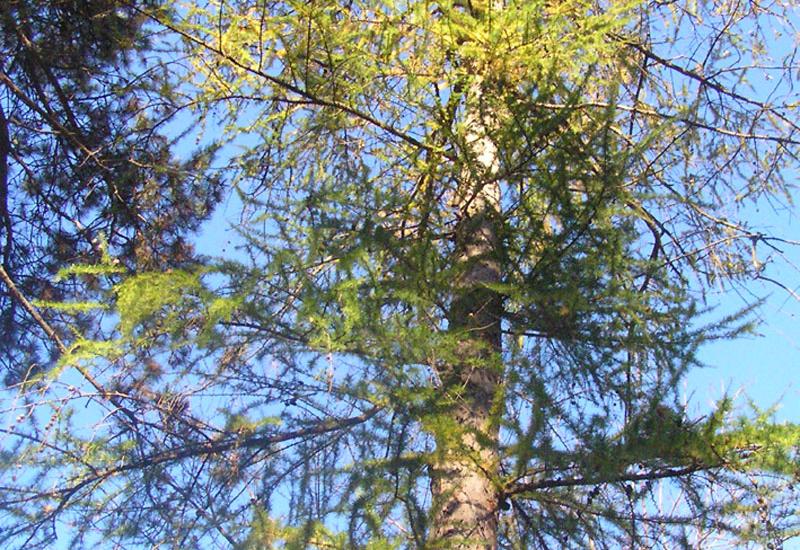 It is called exotic plant among conifers. With all the features of the needle, the tree overthrows needles in the winter and in spring it is covered with young greens. Its Russian name originates from this - "lystvennytsa" and Ukrainian one - modryna. Botanists call it Larix. Some people believe that this is the name of Gallic origin, others - that it comes from the Celtic Lar (abundant, very resinous). Polytechnics can admire these giants (as the highest in the park) opposite the fourth campus building.

Larch (lystvennytsa) belongs to the conifers, and it appeared much later than a pine tree, spruce and cedar, it appeared in the late Mesozoic era along with the oak. It is reckoned that it is species of this tree, which are spread in the northern hemisphere. Trees can reach 50 m in height and can live 300-400 years. Obviously, its ancestors were pine trees, and the need to throw the leaves emerged while the process of adapting to the harsh climate. After the retreat of the glacier larch was the first to move to the North. It is possible to observe it by Arctic Circle (approaches 70 ° east. lat.) and in mountains (up to 2400 m above sea level). It is listed in the Guinness Book of Records as the most frost-resistant tree. It is believed that larch can withstand temperatures up to -65 ° C. However, it loves heat, light and rich soil. For the light preference it takes the first place and cannot tolerate even side shading. For example, lime tree is nine-fold shadow-resistant than larch. Sunlight dependence of larch is so great that tree growth even stops at night, unlike the pine tree, which grows up during the whole day and night. For the first three years it has a meter height, and when it is three or four years old it gives a meter increase each year. It lasts for 30-40 years. Larch has an extensive deep root system, it is resistant to air pollution, and also it is a valuable soil improving breed. Leafage is delicate and holds very little sunlight.

And not only because of that, had it come into history. As it is known, Venice is situated on 118 islands. The city began to be built in V century. Palaces and temples stand on 400 thousand piles of larch, which show still no sign of damage. City of Arkhangelsk, the Winter Palace and St. Isaac's Cathedral in St. Petersburg also stand on larch piles, and now they are as strong as iron. The tree was so rigid that either saw or ax cannot cut it. Floor and window frames made of larch in the Winter Palace are perfectly preserved to this day and, obviously, will serve more than one hundred years.

The longevity of larch can be explained by special chemical composition of resin, which is a long-term preservative. By 1858 in Russia larch was not sold to private individuals, and it was only used in state building, mainly in ship-building.

In the places where larch grows, people use it to make the lower part of the wooden buildings, which will serve for centuries. With time, larch wood becomes rigid and gain strength, moreover, gradually changing its color - it gets even nicer. Kiev estate agents love to tell the story about the nut guy who worked up all the internal surfaces of a country house with planks of larch. In several years they have become like a stone: no picture could be taken away or communication lines could be invented here. This mansion was being sold for a very long time.

Larch wood has exceptional strength and longevity. It is not afraid of wood fretters, has great flexibility and elasticity. Ties are made of larch can serve for decades, while pine ties – only for 4 years. Valuable properties of larch wood are related to its extreme density and high specific gravity, and to the fact that it is impregnated with tannin. Due to the high proportion of water it sinks that is why it cannot be floated like a pine tree.

Due to its medicinal properties larch oleoresin has always been famous, it usually appears between cracked wood. Oleoresin is the raw material for the production of turpentine and rosin; essential oils (16%) can be extracted from it. The needles of larch stand on the first place among other conifers for vitamin C, it also contains essential oil (about 20%), its bark has tannins (8-10%), its seeds - fatty oil. In the Siberian larch wood unique natural antioxidant was found. Its ability to neutralize free radicals tenfold exceeds the previously known natural counterparts - vitamins B, C, beta carotene, tocopherol.

Despite the huge spreading and unique properties, larch has no luck. No songs are sang about it, while viburnum, birch or oak are very often heard in folk music, no cafes, shops, restaurants and ensembles are named by it. But yet this breed deserves deep respect.