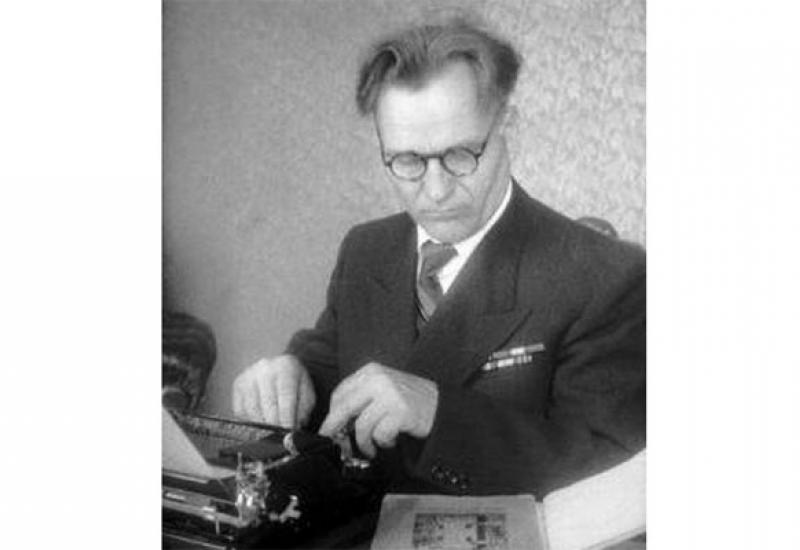 A great role in the final formation of modern Ukrainian literary language was played by Ukrainian writers of the Soviet Ukrainization era, in the first third of the XX Century. This was first put forward in the “History of Ukrainian Literary Language” by the world-famous scientist, a recognized authority in Ukrainistics and religious leader, Ivan Ohienko (Metropolitan Illarion), who spent most of his life in exile and had no sympathy for the Soviet government.

So, in this fact, serious Western linguists agreed even with their Soviet colleagues, whose views on other processes in Ukrainian national culture they usually could not stand.

One should probably add that the modern Ukrainian journalism tradition also began at that time.

One of the prominent places among the throng of people who took part in those processes belongs to Ivan Le, whom the National Technical University of Ukraine “Kyiv Polytechnic Institute” remembers as its alumnus and the first editor of the Kyiv Polytechnician newspaper.

Ivan Leontiyovych Moysya (the surname Le, unusual for a Ukrainian, was the writer's pen name) became a student of the Kyiv Polytechnic in the early 1920s. By that time, he had had serious experience in life (as he was born in 1895 as a son of a landless migrant worker in the village of Moysentsy in Cherkassy region) – years of hard labor, war and revolution. In fact, he just began his higher education at the age most people become mature experts in their chosen field. Even then he was beginning to be somewhat famous as a prospective young writer. But what captivated him the most was the engineer's profession, long dreamed of by generations of peasants and workers. Even more, he began to work by building roads, diligently and persistently mastering the finer points of the profession, and was soon appointed as a work gang leader, and then – a station technician. All the difficulties of the engineer's profession he knew first-hand.

Ivan Le fought in the First World War and the Civil War; conscripted in 1915 as a private, at the start of the revolutions he was a non-commissioned officer – a chief chemist-instructor in the newly-formed Chemical Protection Special Purpose team of the then-Russian Army.

As Ivan Le later wrote in the autobiographic “Through Furrows of Age”, military service was a kind of a “college” to him – especially when he was posted to the newly-created Chemical Protection unit. Chemists' teams were usually formed from educated, intellectual people – teachers, lab assistants, recent students, agronomistst, technicians, even artists. The training took place in Petrograd, the imperial capital, and every leave turned into a visit to a theatre, a charity concert in the People's House and new acquaintances. Afterwards, the posting to the front slightly corrected the “theory” received in the training camp, and the experiences with the fighting army were, in the end, an invaluable asset for his creative personality to form.

It's worth noting that Ivan Le began writing even before the war. His first publications appeared in 1913 in the Cherkassy's Pridneprovye newspaper. In fact, he owed his pen name to the newspaper's editorial, as they couldn't make out the signature under the manuscript and put the first letters of the next word after the author's name in place of a surname. After returning from the front, he published his articles, stories and even poems in Russian and Ukrainian in the Zolotonosha Herald newspaper.

However, Ivan Le considered the true beginning of his professional writing career to be on February 15th, 1925, when his story, “The Link”, was published in the Bilshovyk newspaper. At the time, he was already a student of the Railway Engineers' Department of the Kyiv Polytechnic Institute, where he was enrolled in 1922. However, he was not interested solely in studying. He was behind the creation of a “KPI Group of Young Writers”, which brought together literature fans from the whole institute. In fact, one of the group's members was Yuriy Yanovskyi, a future famous writer, Ivan Le's lifelong friend.

1927 turned out to be particularly eventful for Ivan Le. That year, his first poem collection, “Yukhym Kudrya”, was published. Also, in 1927, he initiated the creation of the Kyiv office of the All-Ukrainian Proletarian Writers' Union (VUSPP). In March the first issue of the Literature Paper, the union's organ, was published, edited, again, by the same Ivan Le. The paper was in for a long and eventful career – it is still the main organ of the Ukrainian Writers' Union, known to modern readers as the Literary Ukraine. A month later came the first issue of the Kyiv Polytechnician, with Ivan Le as the chief editor.

This was how a techinical student and a beginning writer became the father of two printed publications – one of literary critique, and another for the future engineers and scientists, who, at first glance, were far removed from the arts.

Finishing his education, Ivan Le became complete as a writer and journalist. However, his education at the Kyiv Polytechnic also turned out to be of use.

...In the first decades of the XX Century, much like, in fact, today, one of the main problems in Kyiv was housing. Most Kyivites huddled in communals, cellars, or rented corners in private houses. To solve the housing problem, housebuilding cooperatives (housecoops or buildcoops) were formed in the cities. By a 1924's decree of the People's Commissars such associations had numerous benefits. So, in 1929, the Kyiv writers likewise decided to organize into a similar cooperative, proudly, but nonsensically, called “Rolit”, short for “Robitnyky Literatury” (Literary Workers). The space for the building was allocated in the top part of today's Bohdana Khmelnytskogo Street. However, due to several organizational and financial difficulties, the construction started only in 1931. And despite several dozens of writers who joined the 92nd housecoop, the task of building their future housing fell to Ivan Le. The rest of the writers were used for manual labor, and even then only on subbotniks (Working Saturdays) – which, however, took place not only on Saturdays. Le was, in practice, the foreman of the construction and finished it, at last, in 1934, receiving an apartment number 13 in it (in several years, another seven-floor building was built next to it, with its walls covered in memorial boards).

However, Ivan Le's engineering education helped him in the purely literary matters. If, for example, he didn't spend a year building irrigation structures in Fergan, the readers wouldn't have gotten the onetime-popular “Novel of the Chasms”. This sizable novel began as a story of a successfully married young Russian woman, a local – one of the first Uzbek engineers, and their love. But this situation, difficult for the time, soon grew out of the love triangle of a woman, her husband and her lover. The protagonist, Saїd-Ail Mukhtarov, his character, biography and profession, as well as the socio-historical backdrop of the events, dictated new storylines and led the text outside of its boundaries. A confilct of national and religious traditions and family responsibilities moved aside to make way for wider social motives. More and more pages were taken up by descriptions of construction, where the protagonist worked – as demanded both by his profession and by logic of life. In the end, the drama turned into a novel on irrigating the Mirzacho'l Steppes, one of the forerunners of the Soviet workman's literature. The book had, of course, many deficiencies typical of the Soviet prose of the time, dictated by the mainstream literature as put forward by the Party. The novel was about progress and its battle with the yesterday's traditions, the conflict between heroes' personal needs and social demands, and, in the end, even the destruction of the Soviet government's enemies in the East. But even so, the best parts of the “Novel of the Chasms” carried the signs of author's unquestionable talents, his observations of the world and his life experience. In addition, it greatly broadened the horizons of Ukrainian prose, then derided for its ethnocentrism and thematic limitedness.

The “Novel of the Chasms” was immensely popular, going through more than forty reprints and translated into more than ten languages. It immediately made its author widely known and popular.

...In 1940 Ivan Le published his first historical novel, “Nalyvayiko”, dedicated to the people and the circumstances of the late XVI Century's Cossack rebellions. Those events, at the time, weren't particularly covered in the historiography, even if they left a mark in the national memory, so the novel was received with interest. It was the first book of the author's planned epic cycle of historic novels, to be named “Ukraine”, which would contain other novels - “Khmelnytskiy”, “Mazepa”, “Zaliznyak”, “Karmalyuk”, “Shevchenko” and “The People”. However, the second novel, “Bohdan Khmelnytskiy”, started in 1939, would be written over the course of 20 years.

The parts of the novel already written were lost during the Great Patriotic War, where Ivan Le was a war correspondent from Day 1. Literary work was of a second or even third priority for the writer at the time. Le worked not only as a radio instructor on the front, but also as a correspondent for the Izvestiya. He also took part in the fighting, first in a bitter fighting retreat to the Volga, and then – back towards Austria and Yugoslavia. His numerous correspondence, articles, sketches and nouvelles were printed on the pages of frontline and central press, published as short collections. Ivan Leontiyovych would later write of his experiences at the front in his book - “Trial by Fire. Notes of a War Correspondent”.

he writer's first postwar works were largely dedicated to his contemporaries. But soon Ivan Le returned to his life's work; the first book of “Bohdan Khmelnytskiy” was finished in 1957, the second – in 1963, and the third – in 1965. Along with his protagonist's state and political activities and his young years, the author also reconstructs the historical context of the era, and not only in Ukraine. Another protagonist of the epic are the people, personified not only by the Cossack chiefs, but also by the common folk. Another important plotline of the novel is the unfolding rebellion and liberation war against the people's enslavement by the Polish szlachta. Of course, the historical concept of the young Ukrainian state's willful dissolution in the Moscow Tsardom was fully in line with the historical ideologems the Soviet Union inherited from the Russian Empire. But where the author steps away from the ideologically correct pathethism, we can see living people in real historical circumstances.

It is a fact, of course, that Ivan Le was generally a very Soviet person, which couldn't possibly have not left a mark on his creative work. But even so, even today Le's prose (he died thirty years ago, in 1978) is read and loved. In fact, recently, on a forum on the Internet, I suddenly found a confession from a user from Kharkiv: “Once …I read a book, Ivan Le's “Nalyvayiko”, in a day. This was how my Ukrainianhood began”...