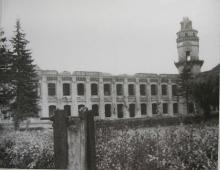 In the June days of 1941 Kiev Industrial Institute completed the 43rd academic year. There are 3,000 students in the Institute, more than 300 faculty members, the total number of the institute's staff was 5,000 [1, p. 2]. As in other universities, graduates defended diploma projects and got assignments to the work, undergraduates had practical training in different cities of the country, younger students had an examination session.

Since the beginning of the Great Patriotic War, all were united by one thing - to protect the homeland. Already in the first weeks of the war 650 students, faculty and staff of the Institute were mobilized and voluntarily joined the Red Army and Navy. About 300 fifth-year students after a brief military training were sent to the front as commanders of units, 300 - seconded to the military-political courses for accelerated training of military political workers [2, p. 15].

With thee approaching front to Kiev a youth group of volunteers, the defenders of the city, was formed in the Institute. Staff and students were enrolled in a people's militia and civil air defense, participated in the construction of fortifications on the outskirts of the capital of Ukraine. In late June 1941 The Institute has received an order to prepare for evacuation. It was started dismantling of valuable laboratory equipment, preparing it for transportation by rail and river transport. In early July, the government decided the evacuation of the Institute in Tashkent. This process was headed by Acting Director of M.V. Kolbasnikov. Since the relocation was carried out under difficult conditions, it was delayed until mid-August. 48 professors and associate professors, 36 lecturers and graduate students, 19 employees, more than 500 students were evacuated [11, p. 38]. Part of laboratory equipment, transported by river transport has not arrived at their destination, other tangible assets were lost.

Many faculty and staff were sent to universities and defense enterprises of the Urals and other eastern regions of the country. Professor M.A. Kondak worked in the Ural factories tank industry, the head of one of the technical departments M.M. Leach - the chief engineer of the aircraft manufacturing plant, the graduates S.A.Kartavov and M.L. Orlikov worked as the engineers of defense plant (later S.A.Kartavov became chief engineer Alapaevsk’s plant, which was producing machines for the aircraft industry). Some faculty professors for health reasons could not be evacuated and remained in occupied by fascist invaders Kiev.

In a difficult situation were those faculty and staff of the Institute, who for health reasons had to stay in the Nazi-occupied Kiev.

First occupation authorities tried to "revive" KPI with its four faculties, but this attempt failed. The Institute was closed, some of the equipment was transferred to Kyivenergo and other city services. According to the documents, the plan of the German civil and military authorities to use the workshop of the Institute for the repair of military equipment is also failed [12, p. 340-341].

Since 1942 the main building of the institute was taken by a military hospital. In addition, for some time on the basis of the institute it was operated created by the occupation authorities Research Institute Metallotehnika. Some individual scientists and staff KPI were involved in the work in its three laboratories and radio workshop.

According to prof. B.S. Lisin occasionally laboratories and classrooms of the Institute were attended by professors from Germany, sought to remove remnants of valuable equipment and scientific staff. Professor of the Department of welding production of P.P. Bushtedt, Head of the Department of Physics GM Gubarev, Dr. chem. Sciences V.A. Plotnikov, scientist E.P. Babich went to work in Germany.