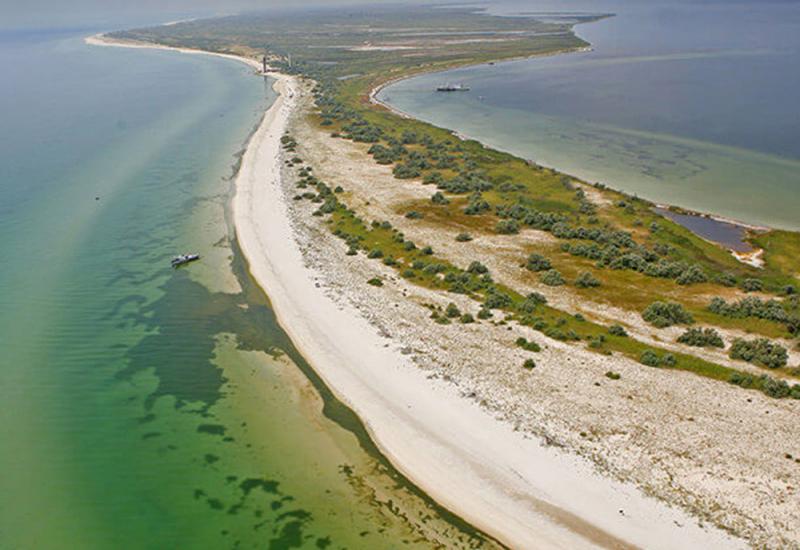 Every district, especially beautiful one, has its secrets and legends, it's favourite heros and mythes about them, which now are called as "fictional" truth.  There is unusual and awesome  Dzharylgach island in Kherson region. It has beautiful nature, clear sea, flora, fauna, views, beaches. It is unusual for its history and meaning.

Like any honorable geographic object, Dzharylgach has appeared for a good reason. There are islands, created by giants, some of them, according to local stories, are backs of great fish, some are washed by powerful rivers , which brought sand to new place. With Dzharylgach everything is simple and tastefully: it was created by goddess (this is one of the versions for tourists).

Wonderful Iphygenia, not willing to be a wife of legendary hero Achille, ran to the seaside to dive into waves forever. But goddess Artemis, willing to save her loyal priestess, began to straw sand in front of her. And the longer she was running, the longer that sand path was  becoming. So,this way Dzharylgach was created and some more hundred kilometres of sandy beaches , which reached Tenderiv Spit. Island is divided from land with a narrow marine duct, which helps to create and save unique atmosphere.

Dzharylgach is an island of love and sea, stars and songs with guitar, dolphins and lighthouses, mouflons and does,sand , seashells, relax and dreams. Everyone imagines it in his own way. But he looks like nothing else. Charismatic, strong, quiet. Incredibly beautiful. A bit distant. but very generous. It gives tranquillity, energy, beauty and happiness out for nothing. Very tactful, without asking any extra questions. Your arrival means you need it. By the way, to each his own.

And Dzharylgach doesn't fail. Nobody lefts without a gift or attention. This is the island of energy and tranquility, force and tenderness, knowledge and acceptance. Honestly, this isn't an equal exchange- because we leave him our sadness and fears, distresses and tiredness. But the life is wise. It knows the island will deal with all we can't.

For the record:  Dzharylgach has the biggest  square and the second longest inhabited island in Ukraine and Black sea. It belongs to national natural park " Dzharylgach". It was mentioned in compositions by  ancient historians Pliniy and Herodotus, geographer Ptolemy. Grazing large cattle and sheep turned the district into desert in the middle of previous century. Nowadays main terrain elements- sandy dunes (with trees in some areas), coastal marsh low-lying lands, estuaries, sandy spits. About 7 km of Dzharylgach Bay separate it from Skadovsk town, where you can commute by ship, yacht, catamaran. The length of island from West to East is about 42 km, from North to South- 4,6 km. Considerable part of an area is located lower the sea level. Average temperature in summer is 22-24°C. This makes an island attractive to vacationers and tourists.