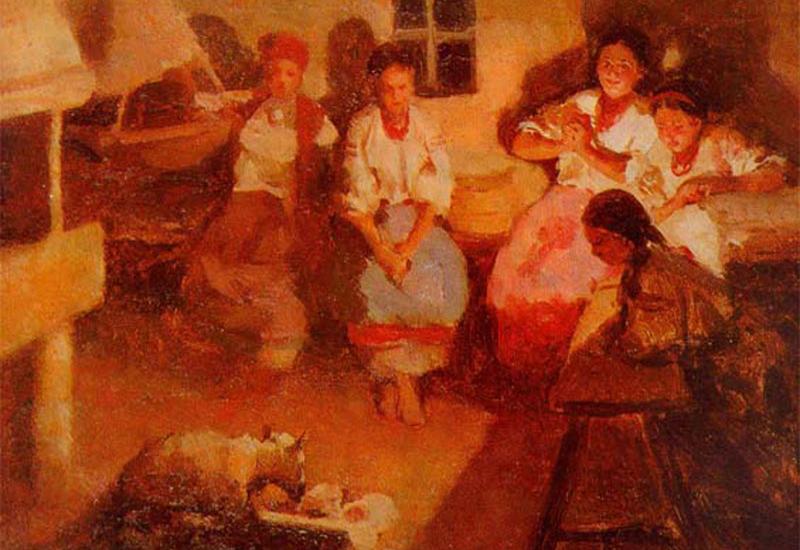 New Year's Eve everybody want to believe in miracles. Almost everyone becomes again a little child and under hasteless strikes of clocks think about the dreams come true. This belief - one of the precious gifts of our ancestors, who, just like us, thought that this night is special, that it "opens the sky", and you can ask for happiness. Never mind that while the New Year came on the night of pass from Melanka to Vasily, i.e. in modern chronology from 13 to 14 January. It was New Year's Eve and, just as now, it was a magical ...

Actually, all Christmastide were unusual - days from Christmas to Epiphany, or Baptism of the Lord. For the world at that time still lives unbaptized, so everywhere spirits roam freely and even evil forces, with whom you can communicate. Particularly active evil manifests on the night of Basil and Epiphany Eve, so then you should sing Christmas carols, repel the enemy of the human race and his minions by bizarre outfits and antics, and divine.

In fact, the Christian church forbids divination, but the desire to know the future has always prevailed. Especially girls, who in all ages eager to learn of their intended.

Divination was carried in different ways, but it was always the mystery of poetry, full of hope and not without a certain fear of the beyond.

The girls on two well-known pictures of the famous Ukrainian artist Nikolai Pimonenko (who, we note, for more than ten years  taught drawing in the KPI), are also trying to see the future.

The first, written in 1888 and called - "Divination", depicts two young girls who are divine on wax. They have melted it and poured into cold water, pulled out of the bowl frozen lump and illuminating fire, gaze at strange shadows on the wall, wondering and fantasizing what these contours are similar and that they portend. Quivering flame of a candle, changeable light on the delicate faces, warm house and twilight blue night outside the window - all this creates a unique atmosphere of expectation of a miracle.

In the second canvas of 1893, titled "Balabushki" - there is a fortune telling scene with a dog. For him, the girls baked small sweet donuts - cake (sometimes they are called dolls). And water for dough they brought not in a bucket or pot, but in their own mouth. The owner of the balabushka whose the dog eats first, will get married first, the others should wait one year more. Therefore, cakes made of different shapes or fasten with colored threads - to discern where whose. In the picture - the height of divination. The dog Circo accustomed to be brought (!) in a warm home (!!) and even treated (!!!) and thriftily took the nearest balabushka. One of the girls happily clapped his hands, others - eagerly await further selections. Along with everyone the woman in a red cap shaking the cradle with the baby, watching the dog with interest. She has no need in divination - there is the husband, and the child, but, still, she interested ...

However, the divination on balabushka usually was made a month before the new year - "at Andrei", that is a holiday of St. Andrew, but in Christmastide some people in the different parts of our country did the same - say, in Hutsulia girls to learn which of them will come first married, fed cat with dumplings.

... There are divinations now also. However, hardly anyone now will lead to his home street dog. Arsenal of tools for divination has expanded considerably - it can be done even with a computer. Of course, most of those who try to January evening with the help of grandmother's secrets to discern their future, say that everything is a joke, custom, a tribute to folk traditions. But, I confess to myself, so I want to believe in miracles! Well, at least at Christmas and New Year! Let's take a good prediction to believe and then they will come true!