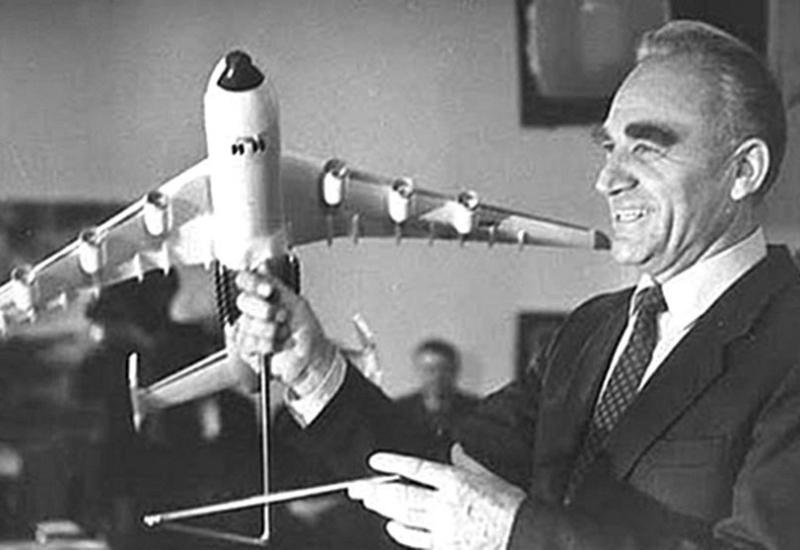 After mastering the serial production of the An-2 aircraft at the Kyiv Aircraft Plant, the Antonov Design Bureau in 1953 was tasked with building the first specialized military transport aircraft in the USSR, which was later designated the An-8. None of the domestic design bureaus had experience in creating such aircraft. First of all, specialists were needed, and in early 1954 the staff of the Design Bureau accepted the first group of graduates of the Kharkiv Aviation Institute. Among them was Petro Balabuev, for whom such planes later became a destiny ... His life is the story of the famous design bureau, established on May 31, 1946.

He was born on May 23, 1931 in the village of Valuyske, Stanychno-Luhansk district, Luhansk region. In 1938 he went to school, but his studies were interrupted by the war. In 1943, the Gestapo shot his father - he was a partisan. A 12-year-old boy was burdened with caring for his mother and two sisters. In the difficult postwar years, he continued his studies, and after graduating from high school in 1948, he chose the prestigious in those years profession of aviation engineer.

Petro Balabuyev enters the Kharkiv Aviation Institute at the Faculty of Aircraft Construction. Showing remarkable organizational skills, in the 4th year he headed the student union. Concerned about improving the lives of students and teachers, he addresses directly to high-level leaders. This is how the style of his leadership is formed - rigid and uncompromising. And the character trait - modesty - is from childhood and for life…

In April 1954, Petro Balabuev arrived in Kyiv as part of a group of 25 KAI graduates. He was appointed to the position of design engineer at the Design Bureau Oleg Antonov, who almost immediately paid attention to the young specialist. But not because of the design work, which he performed very carefully, but because of his organizational skills. And within a year Balabuev moves from design work to the organization of aircraft production. 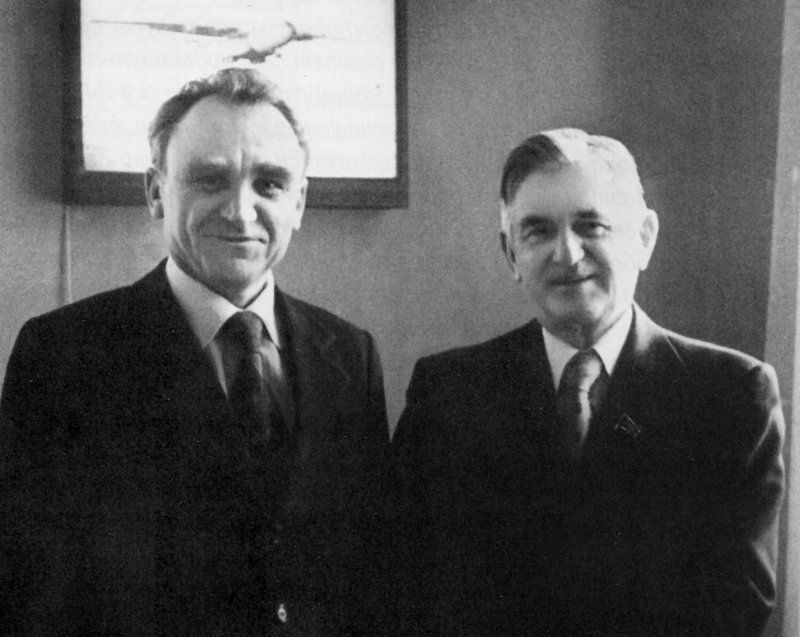 Since 1955 he has been the assistant head of the shop, and within a year he has gained the position of the head of the production preparation workshop. In 1959 he was appointed head of the assembly plant - the largest at the aircraft factory, where the final assembly of aircraft. He becomes the head of all aviation production. At that time, the development, creation and flight tests of the newest twin-engine transport aircraft An-8 were in full swing. A sharp transition from the creation of a fairly simple An-2 to an extremely complex An-8 (and later - four-engine: passenger An-10 and military transport An-12) caused many problems in production, which had to be urgently addressed. Almost everything was for the first time, and Peter Balabuev honorably coped with the tasks.

In 1960, the design of the world's largest (even so far!)  turboprop military transport aircraft An-22 "Antey” began. Its serial production was planned at the aircraft plant in Tashkent, as Kyiv's production facilities were not enough for this. A branch of the Antonov Design Bureau was established in Tashkent in 1959, where An-8 and An-12 aircraft were mass-produced. So, in September 1961, 30-year-old Petro Balabuev was appointed head of the Tashkent branch of the Design Bureau to organize production. The task of performing the most responsible work far from Kyiv testified to the very high level of trust in it on the part of General Designer Oleg Antonov. And he did it - during 1965-1976 66 "Antey” was serially released in Tashkent .

In April 1965 Balabuev returns to Kyiv, he is appointed director of the Kyiv Mechanical Plant (KMZ) - this was the name of the design bureau and its research production. At that time, the first An-30, An-28 and An-26 aircraft were designed and manufactured. These were light and medium-class aircraft, and Petro Vasyliovych was already "attached" to the giant "Antey", so in 1968 he wrote a letter of resignation from the post of director of KMZ and with a request to appoint him a leading designer of An-22 aircraft.  Antonov did not agree with such a "demotion" of a talented leader and appointed him his deputy, and since 1971 - chief designer, first deputy general designer. At that time, the Kyiv Aircraft Plant was mass-producing An-24 and An-26 aircraft, which required constant design support.

Since 1975, a new stage in the activities of the Design Bureau Antonov begins. For the first time in the Soviet Union, the execution of a foreign order begins. Design Bureau has won an international competition to create an An-32 aircraft for the Indian Air Force, capable of operating in high altitude conditions and landing at alpine airfields. Its chief designer is P. V. Balabuev. A year later, he became the head of the design of a unique short-take-off transport aircraft An-72 - the first turbojet in the OKB family, and in 1977 work began on the creation of the giant An-124 "Ruslan". Oleg Antonov entrusts Balabuev with the management of this project. They are both like two forces holding a plane in the air:  Antonov - the lifting force of the wing, and Balabuev - the driving force of the engine. During the creation of this aircraft, a number of outstanding scientific and technical problems were solved, which ensured its unsurpassed transport efficiency.

In 1979, health status of Antonov has deteriorated, and he writes in a letter to P.V. Balabuev: "... If it ends badly for me, take the leadership of the team into your own hands. I give this recommendation to our minister ... I appreciate you for your energy, organizational skills, for the ability to learn "on the go" ... “ Fate took Oleg Antonov a few more years of life, he saw the first takeoff of "Ruslan" in December 1982, but on April 4, 1984 he died… With government decision  Balabuev has been appointed General Designer of the Design Bureau since May 15, 1984.

Under his leadership, the development and flight tests of the "Arctic" An-74 aircraft and the special An-71 - "long-range radar detection" continue. In 1985, the task was to create an aircraft with a large payload to ensure the creation of a reusable space system in the USSR. Only the Antonov Design Bureau was capable of this.  On the basis of the spent design of the unsurpassed "Ruslan" the giant An-225 appears, on the eve of the first flight of which - on December 21, 1988, P.V. Balabuev gave him the fragile name "Mriya" and said: "A Dream is an infinity of human thought and desire, something that leads us forward and will never disappear as long as a person lives on the planet.”

And the idea went on… In 1988, the Design Bureau began to create the latest military transport aircraft short takeoff and landing, but with a payload of an order of magnitude higher than the An-72. The new development is designated An-70. Almost everything was here for the first time: four turboprop engines with unique propeller fans, a wing with powerful mechanization, a fuselage with a cargo compartment capable of accommodating a wide range of military cargo, including NATO standards, an electric remote control system, cockpit displays and much more. For the first time in the USSR, an automated design system was used to create an aircraft. With a cargo of 20 tons, the ground runway of  600 meters was enough for the plane. No plane in the world is capable of this!

But in those days in the USSR "perestroika" was already in full swing, the first sprouts of market relations appeared. It was planned to reduce public funding - the airline had to learn to earn money. Serial production of aircraft in Kyiv was nearing completion, no state order was envisaged. At the beginning of 1989, Balabuev appealed to the heads of state with a request to allow commercial transportation by An-124 aircraft. In April 1989, the Ruslan transport airline was established, the first in the Soviet Union, and today it is called Antonov Airlines. Thanks to the foresight of the General Designer, it was possible to preserve and develop aircraft construction in Ukraine even after the collapse of the Soviet Union.

On December 16, 1994, the long-awaited An-70 took to the skies for the first time, but in the fifth test flight, on February 10, 1995, it crashed. Hardly going through a tragedy, the next day, Balabuev decided to urgently build a second flight of the plane. Without state support, only at the expense of the Antonov Aviation Scientific and Technical Complex,  thanks to the organizational talent of Balabuev, who involved Ukrainian and Russian enterprises in urgent work, the second An-70 was built and lifted into the air on April 24, 1997. Created in cooperation with many enterprises of the former USSR, the An-70 could then be produced only in terms of cooperation with Russia, but due to political and economic differences between the two countries, the excellent machine did not get development in the series …

The main specialization of the Design Bureau is military transport aircraft, but there were also created excellent passenger liners, especially the An-24 - the most popular for regional transportation. Developed in 1959, it was morally and physically obsolete by the last decade of the twentieth century and needed to be replaced. From 1994, Balabuev initiated the development of the passenger An-140, which took to the skies on September 17, 1997. This was the first newly created aircraft in the post-Soviet space! At the design stage, in 1995, the An-140 was selected by Iran for licensed serial production on its territory, bypassing the competition of 12 leading airlines in the world. During its creation, a gradual transition of design work to the use of digital technologies was carried out. Drawing boards and kulmans in DB were replaced by powerful computers with the corresponding software. Mass production was organized at the Kharkiv Aircraft Plant. The first production aircraft took off on October 11, 1999, and the IrAn-140 was built in Iran on February 7, 2001.

And at the beginning of the XXI century, the An-148 appeared, which caused a real stir in the segment of medium-haul passenger aircraft. No one expected that a military transport center would be able to make a competitive machine of this class. Computer-aided design technologies have been applied to all elements of aircraft design, and digital images of parts have been transferred directly to production. And all this - without state support, at the expense of ASTC and thanks to P.V. Balabuev, who was always half a step ahead of time… On December 17, 2004, he escorted his "swallow" from Sviatoshyn Airport to the first flight and said: "For a long time, the Ukrainian aviation industry did not know such a boom. Neither the CIS nor Europe have created a single new aircraft in recent years. And we created! " 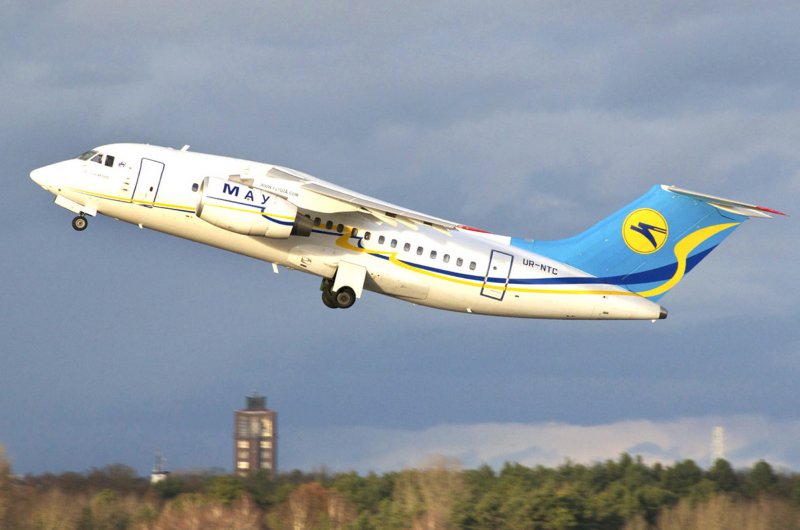 Serial production of the aircraft began at the Kyiv Aircraft Plant, which had been idle before, and in Voronezh, as the cooperation between Ukrainian and Russian enterprises was quite close.

Since 2005, after the change of power in Ukraine, attempts to reorganize the aviation industry have begun. The main idea was to create a concern in which those who were on the verge of bankruptcy were to join the successful enterprise. In addition, a bureaucratic superstructure was formed. Balabuev was against such innovations.  "... I am sure that the proposed grief-reconstruction of the industry covers mercantile, selfish interests. They are only interested in the big money that the An-124 earns at our airline. The goal is to take them away quickly and then privatize them… "But none of the authorities listened to him. In protest, on May 27, 2005, P. V. Balabuev submitted his resignation from the post of General Designer, which was accepted.