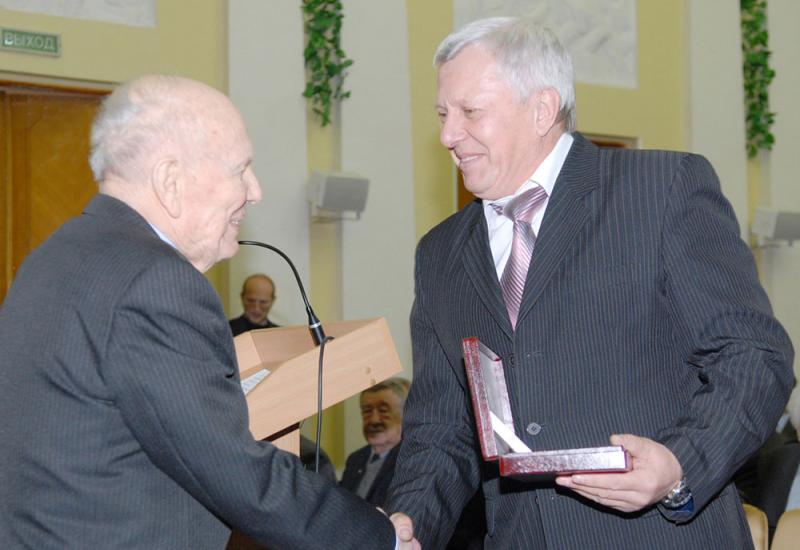 A university competition "teacher-researcher" was launched a decade ago and named galaxy of scientists who have acquired knowledge and skills in Soviet times, when engineering talent aroused respect and KPI graduates successfully work across the vast country. Now many of them have become mentors for young, an example of hard work and scientific concern. For victory compete for several years. Among them -Professor of the Department of production equipment PBF Viktor Stepanovych Antonyuk. In addition, earlier this year he received congratulations also awarded the State Prize of Ukraine in Science and Technology.

Nearly half a century ago, Viktor Stepanovych first entered the Kiev Polytechnic. In 1972 he graduated Kyiv Polytechnic Institute of Order of Lenin of the 50th Anniversary of the Great October Socialist Revolution. Mechanical engineer specialty "Production engineering, machine tools and instruments". Since then, the department always works on the production of devices: 1981 - Ph.D., 1988 - assistant professor, in 2006 - Doctor of Science, 2007 - Professor, 2010 - Academician of the Academy of Engineering Sciences of Ukraine.

His scientific achievements related to the development of theory and methods of surface engineering, scientific substantiation of the formation of the topography of functional surfaces, developing approaches to designing wear-resistant coatings, increase efficiency cutting tool technology ensuring the quality and performance of machine parts and devices.

The victory in the competition "teacher-researcher" V. S. Antonyuk awarded in 2007, 2008, 2009, 2014 Currently, he teaches discipline, "Instrumentation Technology", "Equipment and instrument in instrument making", "Modern coating device manufacturing." Prepared one Doctor of Science and four Doctors of Philosophy. Member of doctoral academic councils of "KPI" and the Institute of Superhard Materials. V. M. Bakulya Sciences of Ukraine, member of the editorial boards of several professional journals, member of organizing committees of international scientific conferences and member of the International Center "Miсronanotehnology and equipment" in the Cherkasy State Technological University.

Professor V.S.Antonyuk is the author of over 400 publications, including 12 books and textbooks, over 60 patents. Among them, the textbook "Biophysics and biomechanics" manuals "Fundamentals of heat transfer elements in optical instrument" monograph "Diagnosis process Metalwork", "vacuum ion-plasma technology in the production of repair", "Methods and means of microscopy" and others.

State Prize was awarded to the team of authors for the work "Development and manufacturing of high-precision machinery and parts for heavy equipment." Scientific work aimed at improving the quality, accuracy and efficiency of technological systems, new kinds of machinery equipment, technologies and equipment for machining complex profiles, development of technology and equipment to strengthen the instrument. An issue of heavy instrumental support precision lathes based on new superhard materials, tool ceramics, hardening coatings on tool and application of new materials processing technology, making it possible to significantly improve their technical and operational performance. Industrial implementation of the work allowed to produce heavy metalworking equipment of new generation that is on par with the best world standards and successfully compete with machine tools the world's best companies.

Developed by a group of authors heavy machines that they are made at JSC "Kramatorsk plant of heavy machine tools" allow annual increase output for metallurgical and energy companies of Ukraine and for export - businesses in Italy, the US, Japan, China and others.

Viktor Stepanovych respected colleagues and students - for knowledge, rich experience, sound judgment and prudence when making decisions. Scientific-pedagogical activity it combines the social life of the institute for many years headed the trade union organization PBF, is chairman of the trade union committee of employees "KPI". It reaches young people. Perhaps in dealing with young is a veteran's secret of creative longevity hiding.