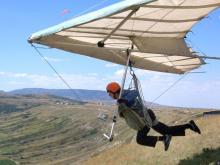 Hang Gliding Club NTUU "KPI" "Altair" was founded more than 30 years ago. During this time  hundreds of students, alumni and faculty staff of our university went through it. The Pershin brothers werethe initiators of  the club. In 1975, in the premises of  KPI it was appeared their announcement: "Those who want to build a glider, unite!". And those who longed for a flight met together. And they began to act. In stock Zhulyany there were acquired six high-jump – they were used to create the frame of the  first Club apparatus. Bologna fabrics of blue and pink color was bought at the Vladimir market, and it was sewed a sail in a dormitory on a normal sewing machine. Proceedings were completed in September 1975 with the first flight of the apparatus of a newborn club KPI. In 1976, four new members came to the club. They left an imprint on the subsequent history of the club. Their names are: V.I. Zubchuk, M. Luchkin, I. Shevchuk, Yu. Primak. Teacher of FE V.Zubchuk was the first official head of the club and "legalized" its existence. (Narrated pilot constructor of the  club L.Gun'ko (1998))

Under the tutelage of M. Luchkin it  passed brightest and the sidereal time of the club "Altair", and he is one of the most notable and extraordinary people not just in the club's history, but also among the pilots of Ukraine. With him at the club it was prevailed the special sporting spirit. It was most important to overcome the difficulties on the way to flights, despite the eternal problems with the lack of equipment, materials, and so on.  At that time, and later KPI gliders called "Chinese" there was a lot of people and little of technology in them. Hang Club KPI was first club of  pilots, not designers. The own designs were not developed, except, perhaps, double "super" of O. Muraveinik (still the only one in town). Every autumn club recorded 40-60 beginners.

But marathon training of hang club was overcame by barely a tenth of arrivals: it is not easy to go through that precedes flight - the endless training on the plain with the glider on his shoulders.

A promising direction for further development of hang gliding is air tug by motor hang glider. Recall that at the beginning of the gliding the flight was starts from the mountain. , Now glider pilots do not remember it. Special plane "pulls" the glider to the proper altitude, there glider is disconnected flies itself. The same now is with hang glider, only the role of special plane performs a glider with a motor.

Today, the club is working in close cooperation with the Department of aviation and space systems. Now there are here 50 active pilots and cadets, and the number of people willing to learn to fly is constantly growing.

Under the guidance of instructors who are alumni of the club, students master the art of free flight. Of course, flight training requires from the students considerable effort, but they are worth it. Experienced club pilots take part in competitions of  the town and the country, as well as international. Some even take part in foreign championships and cups. The possibility of participation is not limited by the qualification, only by financial capabilities. Among the most powerful sporting achievements one can mention the title of  USSR champion, won by Alexey Sudak in 1989. There were also a three-time victory Sergei Semenov in the championship of Ukraine in 2000, 2001, 2002, bronze cup Julia Burlachenko at the Open Championship in Slovakia in 2004, the first team place at the Ukrainian championships in 2001 and 2002 and multiple wins in other competitions.

Throughout 2006, members of the club took part in five competitions Hang Gliding, major sporting achievements have been made in the team competition. The open championship of Ukraine, the first phase of which was held on deltadrom Ivano-Frankivsk region, our team showed a very tight results KPI-1, KPI-2002 (it includes pilots who started their studies in 2002), KPI-2 took 3th, 4th and 5th places. Extremely unfavorable spring weather conditions forced to spend the second stage of the championship in the summer, using air tug start. Because of the repeated transfer of its terms many of the leading pilots of the club could not be delivered and reach their full potential. But those who took part, demonstrated a high level of athletic training and ownership of the new technology. They fought on par with top athletes from Ukraine and abroad, sometimes showing better results than those experienced masters of sports.

Because of the organizational problems of the Ukrainian Cup, which was held in April 2006, it gathered a relatively small number of athletes, but even in a reduced number the representatives of "Altair" were able to win the third team place. Particularly noteworthy is a progress in mastering air tug method and very promising start and sporting achievements of the graduate FASS Gregory Egoshin and the graduate FE Yevgeny Lysenko.

Traditional Cup Crimea of E. Grinenko, which was held during the first week of August, under the patronage of the Crimean Republican delta Club on the legendary Mount Klementiev near Koktebel, has collected more than 30 athletes from Ukraine and Russia. These competitions have become very important for beginners: they gained invaluable experience of wrestling and competitive style of flying. Prize-winning achievements are: Alexey Sudak - second in the standings and third team KPI-2002.

Along with the competition in the Crimea it was held training camp for cadets of the club. At this time, pilots can significantly increase the level of their training, stepping to new levels of airmanship. So, students KPI Taras Kondratyuk and Alexander Lokot flew its first routes, they have gained experience of flying in goals with the return to the starting point. Among beginners, students demonstrated better results KPI Maxim Krasnokutsky, Dmitry Pischela, Maxim Tkachenko. They are engaged in more than two years, but already mastered the skills of long flights in dynamic updrafts and proceeded to climb in thermals.

During the closing ceremony of the Cup of E. Grinenko it was also held solemn celebration of the 30th anniversary of the hang gliding sport in Ukraine. The event was attended by many veterans who for their enthusiasm and love for flying began this way flights. Communication with them was very interesting and useful both beginners and experienced pilots. And in October 2006, the club "Altair" was celebrating the 30th anniversary of its founding. In spite of all the obstacles and difficulties  of really bad weather and  absence of external financing, the staff enthusiastically looks to the future, devoting himself to his favorite cause - flying!

Author: Vladimir Marchuk, head of the club "Altair", a graduate of the FASS