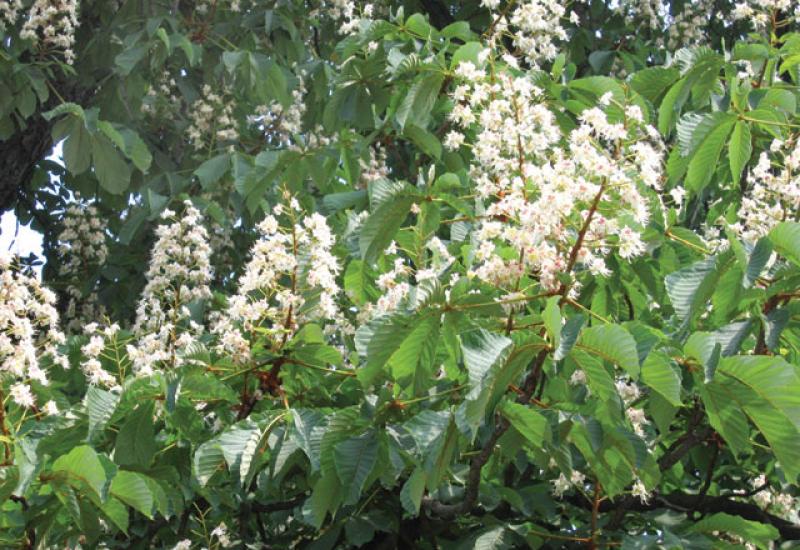 Our city is beautiful at any time. But most of all visitors gathers here, apparently still in the spring, when the Kiev white-pink chestnuts are blooming in April, because Kiev is called the city of chestnuts. Blossoming chestnut in Soviet times was the official symbol of the city, proudly showing off his coat of arms. A song "Kyiv Waltz", written in 1950 by Andrei Malyshko and Platon Mayboroda, has always been considered an anthem of the capital:

Chestnut (his birthplace - Greece) became "fashionable" in the second half of the XIX century. But trees with luxury and pyramidal crown buds decorated city estates and monasteries from the XVIII century.

First chestnut alley was planted by the architect Christopher Wren in 1799 on the banks of the Thames in the park near London, and soon there even began to organize Chestnut Festival - between 19 and 26 May. Old alley in Kiev Botanical Garden named after Fomin also deserves attention, but we do not have such a holiday tradition. However, nothing prevents recall the example of Londoners.

There are several versions of the appearance of chestnuts in Kiev. The well-known said that in 1842 on the arrival of Tsar Nicholas I, the then Governor General Bibikov imported from the Balkans "an unknown plant, good looking and nice smelling." The trees were planted in the alley on Bibikov Boulevard (now Shevchenko Boulevard), by which the monarch had to enter the city. However, the emperor expressed his dissatisfaction. During the night, all the chestnuts were uprooted and instead poplars were planted. Fortunately, the townspeople did not let die exotic trees and planted them in their backyards.

According to another version, the chestnut trees decorated manor Kiev monasteries still in XVII-XVIII centuries. Information about this one can find, in particular, in the "History of Kiev", dated 1799-1800, which mentions "wild" (non-edible) chestnuts that wealthy people of Kiev " grew in the gardens just for the beauty of their flowers." An additional advantage of these trees were lush crown, which gave shelter from the summer heat.

Some historians argue that the Kiev chestnuts owe their existence primarily and essentially a huge number of retired officers – the veterans of the Patriotic War of 1812, who settled in the city. They brought from Europe and spread this wonderful tree.
There are many stories and legends about the chestnut tree. One of them - about Chaim Weizmann, scientist and innovator with the Department of Chemistry, University of Manchester. During World War I the British army there was a shortage of acetone required for the production of gunpowder. Weizmann rescued the situation. He was able to get the acetone from Buckeyes and thus returned to the combat capability of the British Army. Subsequently, the British government supported the initiative to establish a scholar of Jewish settlement in Palestine. Thus was laid the "foundation" of Israel. Chaim Weizmann became its first president.

Children easily find applications to chestnuts. They make delicate fans from their leaves, collect flowers for a herbarium, and with the help of matches and clay make from the nuts funny little animals. Kids gave a funny nickname "flying cactus to chestnuts in a barbed peel.