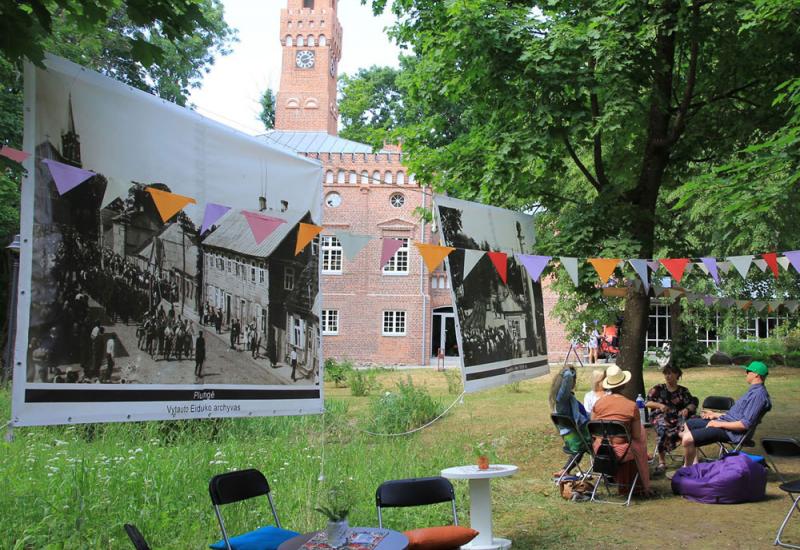 Having travelled Lithuania this summer, Ukrainian tourists got acquainted with its northwestern region – Samogitia, which retained its identity and culture for many hundreds of years, and Samogitians retained their own language and stubbornness. They were the last of the European nations to adopt Christianity, and pagan temples can still be found on their sites of ancient town. It was also the inspiration for motives of Čiurlionis’ works. Among other cities, we visited the village of Plunge, known for its well-preserved estate, the last owners of which were Oginski princes in 1873-1915.

The estate traces its history back to the XVI century. It was hosted by Vilnius bishops, Potocki family and Platon Zubov, the last minion of Catherine II. In the XVIII century, a landscape park with a cascade of lakes was created here. In the XIX century a Neo-Gothic castle, a miniature of the Palazzo Vecchio in Florence was built. They lived on the upper floors in the summer, and the gardener lived on the ground floor. Greenhouses were built nearby, where palm trees, grapes and pineapples grew. A clock on the 12-meter tower of the palace still works, only weights and chains were replaced. In the 1920s, the tenement was turned into communal apartments, since 1953, the school was there, and since 1989, the building had been empty.

Since 1939, a public library has been working in the city. Since 1988, it is headed by Violeta Skieriene. It was here in 1988 that the local branch of Sayudis (a public organization, initiated Lithuania’s exit from the USSR) was created. In addition, the first national tricolor was raised above the library.

With the entry of Lithuania into the EU, it began to receive grants for preserving the cultural and historical heritage particularly for library repairing. It is hard to imagine, but three aged women (the library staff at that time) achieved a change in the purposiveness of the funds – for the restoration of the castle with a clock, the completion of premises on the foundations of the greenhouse and the transfer of library funds there. Therefore, since 2012, the cultural and educational institution has been serving readers in the restored mini-castle and participating in European projects. The library has become an interesting public space with unique cultural opportunities for locals and tourists. Two years ago, the library won the International Library Organization's Innovation Award. Through the efforts of volunteers, the estate is being improved, the flora and fauna recovers. Up to 30 thousand guests come here annually for experience, knowledge and new emotions. In particular, the staff of the institution (8 people already) introduced the innovative project Plunge Smart Park to create a “smart” zone in the park, which will be available for everyone. These are virtual educational programs (in several languages), adapted for mobile devices, introducing the park, its objects, history, flora and fauna.

Our tour group was amazed at the range and variety of programs introduced in the Plunge library. Moreover, the head of the Center for Information, Innovation and Education, Mrs. Virginia Lutikaite, who told us about her work, was nicknamed “our grandmother”. The day after returning to Ukraine, the author accidentally found out that the sci-tech library of Igor Sikorsky Kyiv Polytechnic Institute was making a give-away of ecobags among readers. The only thing you needed to do is to give valid reasons why an individual needs the bag. Suddenly the phrase itself appeared: I will send to the Plunge library as a symbol of friendship, respect and admiration for their dedication and creativity in their work. I won the bag and sent it. In response, I received pleasant little things, postcards and invitations for meeting. Therefore, while traveling Lithuania, you should definitely visit Plunge, the park and the library.